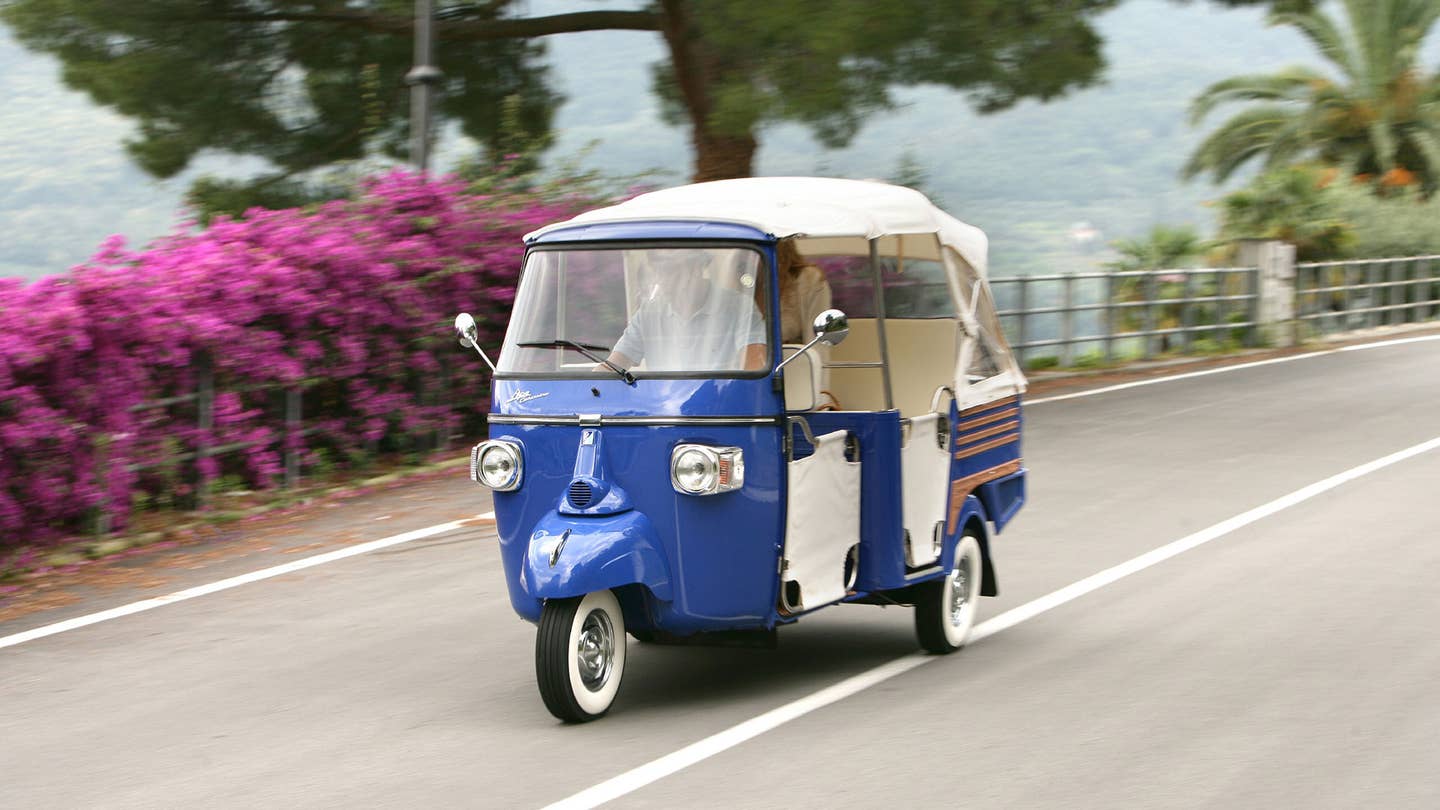 In the Chinese Zodiac calendar, 2016 is the year of the Monkey. Those born in the ninth year of the twelve-animal Chinese calendar are thought to be smart, impetuous, sociable, and occasionally selfish. Also skilled at inoffensive rock-pop.

If you’re looking to have great good fortune during the year of the Monkey, it’s probably a good idea to drive something with a simian bent. Here, then, are the best wheels for a monkeylicious 2016. To quote Terry Pratchett’s orangutan-Librarian, they’re absolutely Ook.

Yes, Dr. Goodall, we know that apes and monkeys are as unlike as apples and bananas; however, you’d look pretty stupid trying to file a Piaggio Ape under the year of the rabbit, so let’s call it a catch-all term. Besides, this three-wheeled wonder only happens to look like it’s got opposable thumbs on hands and feet: in fact, “Ape” is Italian for bee.

Mechanically speaking, what we’ve got here is a Vespa converted for cargo duty. The earliest ones even had the waspish Vespa’s 50cc engine, giving them performance capabilities more sloth than spider monkey. Later modern variants have up to 200cc of displacement, more than enough to run a small barrel-delivery company.

While classic commercials might have you believe the GTO is a better pick for the year of the Tiger (or the year of the Goat, if such a thing existed), there’s only one true Monkey-mobile. Make that Monkeemobile—when designer Dean Jeffries crafted a custom droptop for the Sixties sitcom-slash-band The Monkees, a connection to Pontiac meant that a pair of GTO convertibles became the basis for a fantastical ride.

Specifically, that’d be two 389-powered four-barrel GTO ’verts, one of which was used as Major Nelson’s car in I Dream of Jeannie before its transformation. Buy one, do a little monkeying around, and don’t let George Barris take credit for your burnouts.

With everything from an energy drink to a restaurant chain, Fast N’ Loud’s Gas Monkey Garage seems a little more Loud than Fast. Still, love or hate ’em, you can’t help admitting their resurrection of an Italian supercar represents the happy nexus of nutcases.

Totaled by a service technician, this Ferrari F40 was destined for the carbon-fibre scrapheap. Instead, it was brought back from the dead, painted a sinister black, and fitted with modifications that are surprisingly reserved, all things considered. If you can’t scratch an itch with a Tubi-equipped 550-horsepower last-of-the-analog-supercars F40, then you’re not screeching loudly enough.

Too obvious, really. First shown in ’61, the tiny displacement, tiny framed Honda Monkey, the Z100, was a single-cylinder ticket to scraped knees and big grins. Ideal for scrambling antics, the earliest ones were so simple that Honda didn’t even bother with suspension.

Consider the Grom to be the Monkey Bike’s equally riotous descendant. Don’t let the small size fool you, this thing might just be more fun than any liter-displacement VFR could hope to be.

As a luxury SUV brand (and a scent), Humvee is most definitely dead. As a tough, no-nonsense offroader for those who would be a cigar-chomping Governator, then perhaps not.

The original H1 civilian version of the military-spec Humvee still lives, sold as the V1 Gorilla. It’s an apt appellation for this great ape: capable of climbing a 60-percent grade and towing five tons, the H1/V1 proves itself an evergreen silverback.

Make that Suzuki Capuchin-o. Just like the cute monkey from classic Friends episodes (Joey’s on Top Gear no? What?), this little Japanese-market kei car is quirkily adorable—and possibly an illegal exotic import.

Powered by a turbocharged three-cylinder engine displacing less than 660cc, this lightweight makes a 1st-gen Miata look like an Eldorado. With its 1500 pounds evenly distributed 50/50 on double-wishbone suspension, this compact Suzuki is nimble enough to elude your grasp—but at a gray-market-friendly 25 years old this year, it just might be within reach.

Pity the 996-series Porsche 911. Co-developed alongside the Boxster, it was first of the wasserboxers, and thus, Porsche purist poison. It also doesn’t help that those “fried-egg” headlights are downright ugly.

However, it’s this lack of desirability that keeps prices of the 996 Turbo low while air-cooled 993 Turbos soar past the quarter-million-dollar mark. That means you can modify the hell out of their stout Mezger engines, up to and including one of BBi Autosport’s 1,300-hp total packages. BBi gives so-equipped 996s the nickname King Kong. We’d love to see one go toe-to-toe with Godzilla (a modified Nissan GT-R) for monstrous supremacy.