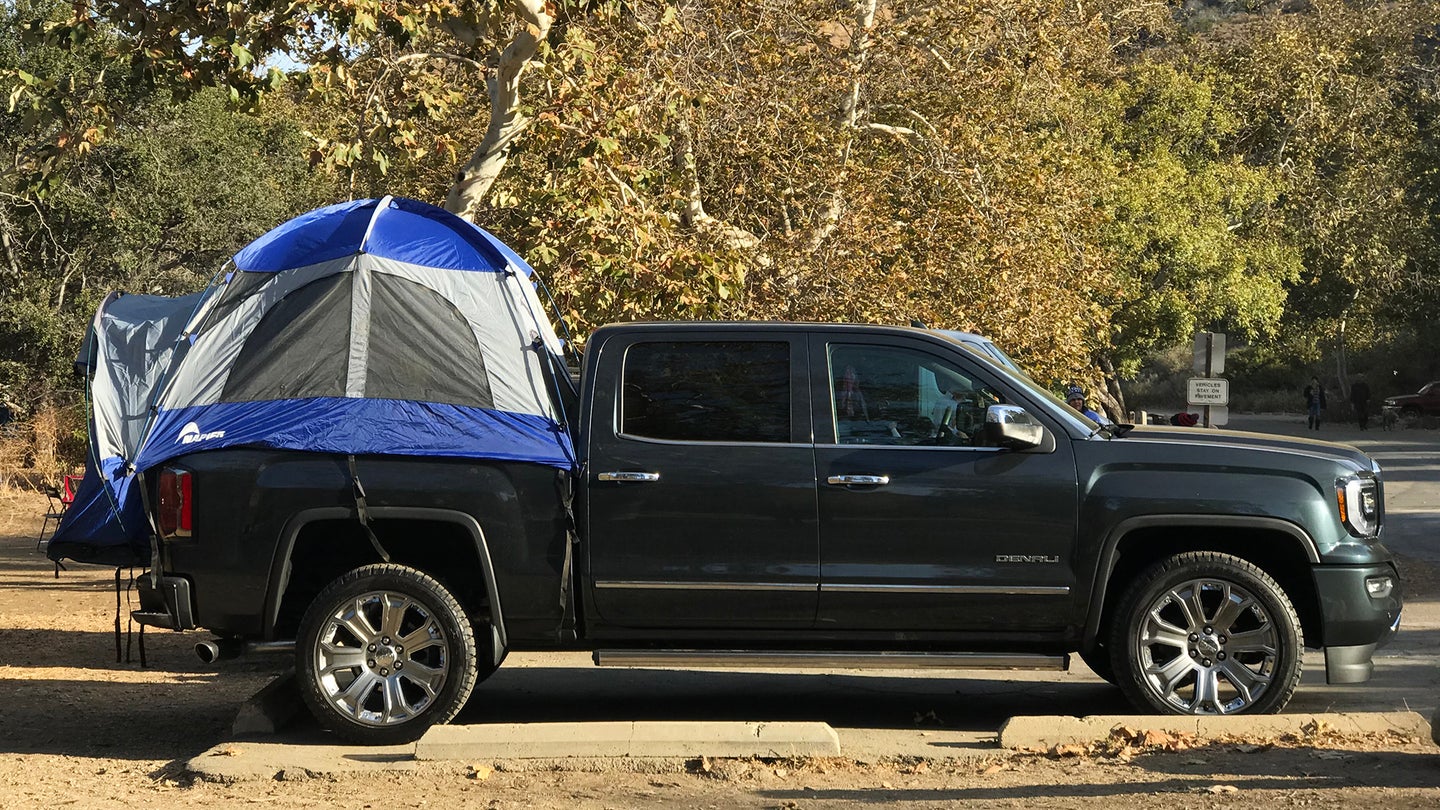 There may be no recreational activity that divides us quite like camping. Tell most people that you’re headed into the wild next weekend and there’s a pretty good chance they’ll respond with either jealous awe or complete incomprehension, as if you’re the kid from, well, Into the Wild. "You’re really going to sleep outside? On the ground?"

Not necessarily. The rise of “glamping,” true camping’s glamorous sibling, has helped transform the ancient art of roughing it in the wilderness into grade-A rocket fuel for our image-centric lives on social media. Nowadays, the timeless tableau presented by a humble campsite has been supplanted by luxurious picnic spreads and palatial shelters rated for use on Mount Everest.

Somewhere in the middle lies a less-common sight: The pickup truck bed tent. Offered as a $270 dealer option on the 2018 GMC Sierra, it’s a literal step up from a traditional tent—but no one will confuse it with a four-star eco resort, either. It can also be a handy way to set up camp on uneven or less-than-ideal terrain.

I recently moved from the East Coast to Southern California, where winter is more of a theoretical concept than a four-month nightmare. There are a lot of reasons this makes me an unsympathetic character, but high among them is the easy, all-season access to nature found here. So, full disclosure: It annoys me when people cock an eyebrow at the thought of camping. Come on, is there a better way to spend a few days than relaxing (and drinking) in an Eden-esque (or at least East of Eden-esque) paradise? I think not.

To prove my case, I borrowed a GMC Sierra Denali truck-tent combo from General Motors on a beautiful late-November weekend for my inaugural SoCal camping trip. (Or is it technically glamping if you’re not touching the ground?)

GMC is General Motors’s rugged, upmarket brand—the boss’s truck, if you will. [Not to be confused with The Boss's truck. —Ed.] You may have heard its new “Like a Pro” tagline recently, and regardless of whether you think it’s ludicrous to spend $64,000 on a pickup truck, the resulting rig is certainly comfortable, capable, and plenty professional in stature. And while the Sierra isn't the first vehicle to offer an integrated tent as an option, its swank interior and lofty price tag make it one of the more aspirational ways to commune with nature.

With a 5.3-liter EcoTech V8 engine putting out 355 horsepower, an eight-speed automatic, and on-demand four-wheel-drive, the Sierra is mechanically identical to the Chevrolet Silverado. It seems nicer, though, thanks to the sleeker front fascia and a healthy list of options. Considering my crew-cab loaner was equipped with goodies like heated and ventilated seats, SiriusXM satellite radio, and Magnetic Ride Control, the truck was actually the fanciest part of the whole camping-slash-glamping experience.

Really, other than its size, price, and uneconomical nature, there’s very little to warn buyers about in the Sierra. I would absolutely ditch those 22-inch chrome rims and low-profile tires on my own truck, though—they really don’t match the outdoorsy vibe of the tent at all.

The Great California Camping Adventure; Or, Why Tents Come With Instructions

One Sunday morning, with our gear packed and cooler full of meat, bread, and adult beverages stowed out back, my wife and I set off for Leo Carillo State Park in Malibu. Nestled in a small valley off the Pacific Coast Highway, the serpentine campground winds down from the dry, golden hills and spills onto a rocky beach famous for its tide pools. Along for the adventure was my wife’s cousin, her husband, and their seven-year-old son—an appropriate judge of the truck-and-tent combo's cool factor.

The sprawling campsite stretched across a grass-covered clearing, encompassing several excellent climbing trees and a small island of overgrown brush and brambles. It was beautiful and private in equal measure, but it also presented our first challenge: Motor vehicles were limited to a small parking area at the edge of the site. I squeezed the Sierra in backwards and maneuvered as close as I could, but ultimately, it did feel a little like someone put baby in a corner.

After the unloading finished and the drinking commenced, I ran into my second speed bump. Setting up a normal tent is pretty straightforward, but a truck tent is a little more complicated, because it’s designed to cover the bottom and sides of a pickup bed—which gives the base a weird shape and extra folds that make it tougher to work with. People kept on asking if I needed help. I did, but I was too proud to admit it and did my hard time in Struggle City alone.

The instructions advise that you assemble the Napier Outdoors tent on the ground and then lift it into the bed. I can’t say whether it’s harder to do it all in one go in the bed. But what I can say is doing it as directed is a bummer, because once you wrestle all those poles into their proper slots and spring it to life, muscle memory tells you the work's all done. The act of lining everything up and securing it to the truck carries the unpleasant tang of a surprise chore, like when your pet vomits on the carpet.

Thankfully, it was smooth sailing after that. The supplied air mattress, which had cutouts for the wheel arches and an electric pump that ran off the Sierra’s 12-volt outlet, inflated in a minute and transformed the tent into a portable bounce castle. And even though the tent has side pockets for various sundries, having access to the truck’s cab through the rear window was like having a lockable storage unit within arm's reach. The seven-year-old declared the setup to be an excellent fort, and he’s not wrong.

With the hard part done, we got down to business enjoying ourselves. Even if you’re just passing through Malibu, I can’t recommend a stop at Leo Carillo enough—the rock-strewn landscape makes for terrible swimming and sunbathing, but being able to explore an endless stretch of bustling tide pools is a worthy tradeoff. Just make sure any shells you pick up aren't hiding a hermit crab deep inside that will come to life in your wife’s pocket in the middle of the night.

The rest of the night at the campsite passed as it should—good beer, great conversation, and Jiffy Pop over the open fire—with the surrounding hills mercifully blocking any cell signals. In many ways, camping is like the ultimate free association exercise. Leaving behind the distractions of the modern world and focusing on the here and now opens up pathways in your brain that have long since atrophied. It’s a quick pause on modernity, an ego check for the racing rats, and a reminder that we are but fancy monkeys who somehow learned to talk.

Well, except for the fresh, gleaming slab of Americana where we retired at night. As to be expected, the big air mattress in the bed of the Sierra was incredibly comfortable, and somehow didn’t feel like cheating...even though a 12-inch-thick sleeping pad is the very definition of glamping.

One thing to note: Since you’re no longer in direct contact with Earth when you're in the pickup bed, you lose the ground's insulating benefits. Yes, it still gets (relatively) cold in Southern California at night, and the air swirling around under the truck bed compounds the feeling. But as long as you’re smart enough to bring a decent sleeping bag, you won’t really notice.

Crawling out of our commodious suite, I set about the important business of making coffee. There are few feelings better than drinking a hot cup of coffee outside on a cool morning...and few processes more fraught with peril when you’re camping. Your best bet is an old-school percolator over the fire—which takes some skill unless you like your coffee weak and gritty—or you can use a portable gas burner, like the one GM helpfully supplied, to immensely simplify the process. (I still managed to mess it up.)

Taking the bed tent down is much easier than setting it up, thankfully—start popping out the poles and everything just sort of collapses, like any other tent. We followed the general rules for not camping like a jerk—picking up all our trash and triple-checking to make sure the coals weren’t still hot—all while staring morosely down the exit road, knowing we were going to have to follow it back to real life soon enough.

And that, I think, is the beauty of GMC offering its own bed tent. Most dealer options are functionally useless wastes of money, but something like this can be a portal to a different way of living. Having the ability to camp on a whim can allow owners to more easily cut through the trappings of modern life and unlock something more elemental inside themselves. Despite the slightly more complicated setup, a bed tent streamlines a camping trip, eliminating concerns about campsite conditions or things like rocky or uneven terrain. Hell, you don’t even need an official camp site; if you live anywhere in the western half of the United States, chances are there are some public lands within a day’s drive where you can trundle off the beaten path and camp pretty much anywhere, truck and all.

That’s why if yours truly was buying a new GMC Sierra, this option would be a no-brainer. Sure, it’s a little more expensive than a cheap-o tent from Wal-Mart, but it’s pocket change compared to the overall purchase price. You may not need it, but if you’re already shelling out $60,000 in one go, you might want the ability to get away from it all...if only for a weekend.