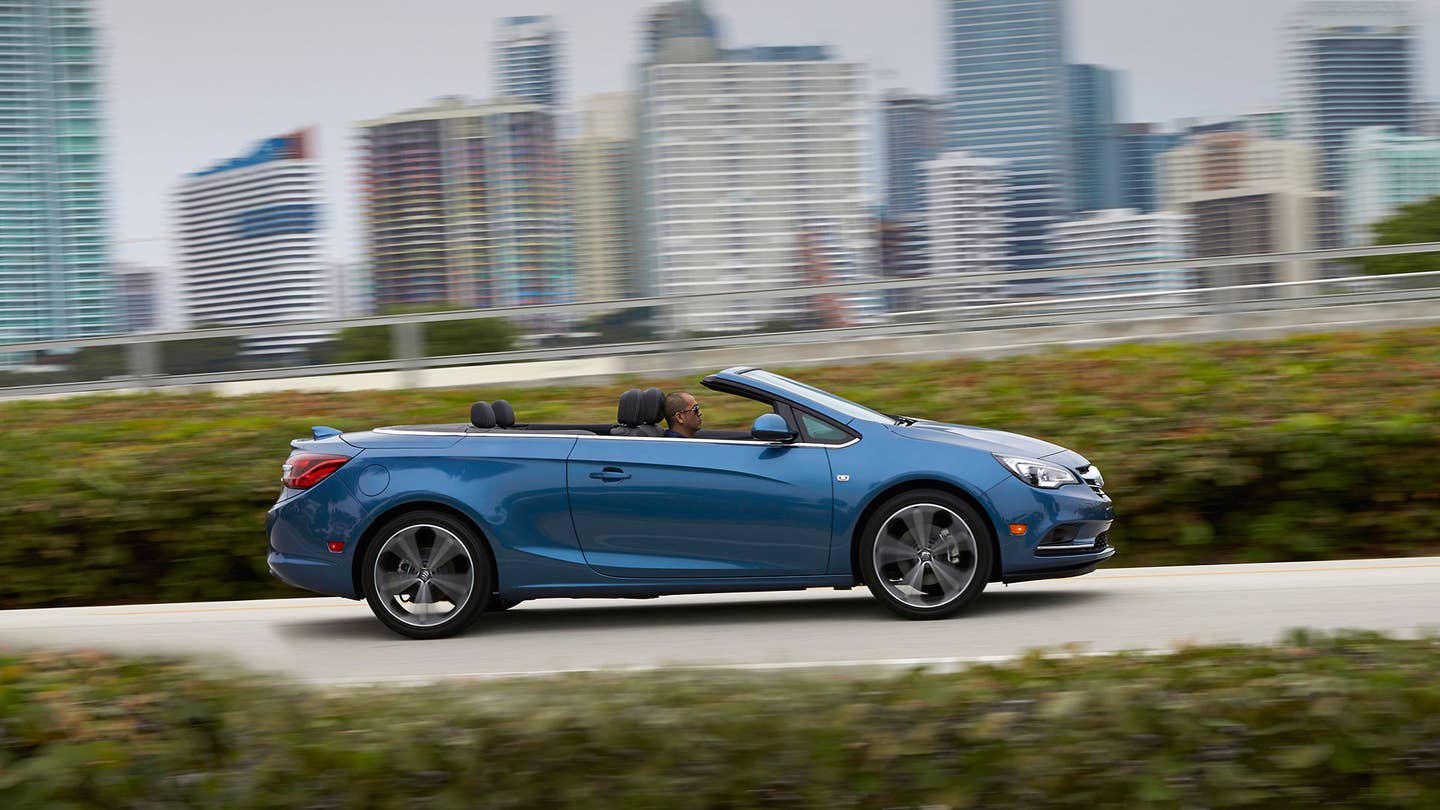 Don’t ding it for this, but the 2016 Buick Cascada is exactly what you'd expect: a front-wheel-drive, smooth-riding highway cruiser of a ragtop.

Yes, ragtop. The hardtop-convertible craze has slowed in recent years, so not offering a solid dome isn't the deal-breaker it might have been five years ago. It doesn’t need one, anyway; the Cascada's soft top works just fine. It's heavily insulated, blocking road noise with ruthless efficacy. Buick is so proud of the top that the brand’s spokespeople used the word “premium” three times in a 200-word description of it.

The Cascada has a turbocharged inline-four with 200 horsepower and 207 lb-ft of torque: a decent amount of power on paper for a two-door ragtop, but in practice, it takes a heavy right foot to kick this car’s ass up to speed. Some blame goes to the throttle programming; the first half of the gas pedal's travel seems to exist primarily for foot calisthenics. And at the end of an onramp, you haven’t shaken the feeling that the thing simply is underpowered. The Cascada’s platform was heavily revised for convertible duty, and it shows at the scales. At 3,979 lbs, each pony is stuck lugging around nearly 20 lbs of car.

Look past that, though, and the Cascada reveals itself to be a pleasant machine. The chassis feels Eiffel Tower-rigid; the suspension strikes the sweet spot between floaty and firm; and apart from a bit of buffeting with the windows up, wind noise is never an issue. And again, it's a Buick convertible. Apart from the occasional Regal GS or Grand National, Buicks are more about comfort than speed. They're automotive Valium, not MDMA.

Which is probably good for the Cascada, because the interior doesn't quite reach the technological standards of most new cars with price tags nudging $40,000. The Buick’s European near-identical twin, the Opel Cascada, has been around since 2013, but the interior strikes an emphatically mid-aughts, pre-bailout GM pose. The instrument panel's tiny screen is a monochromatic anachronism, the center console a sea of buttons and knobs cheap facsimiles of what you’d find in a Porsche Panamera. As a car guy, it's refreshing (woo for actual buttons!); as a tech-hungry Gen Y-er, it's embarrassing.

But millennial-populated TV spots aside, most people in their Twenties and Thirties are only going to encounter the Cascada at rental car lots. This Buick is likely destined for the same buyers that Buick is trying to appeal beyond: snowbirds and empty-nesters with disposable income who prefer relaxation to excitement.

Buick does make cars that defy expectations; the Regal GS is an underrated gem, and the Enclave is charming in ways few tiny crossovers are. The Cascada simply isn't one of those cars.