The Sad Story of the Most Ridiculous Car I Ever Owned

Or how a fling with a 1988 Cadillac Brougham d’Elegance turned serious. 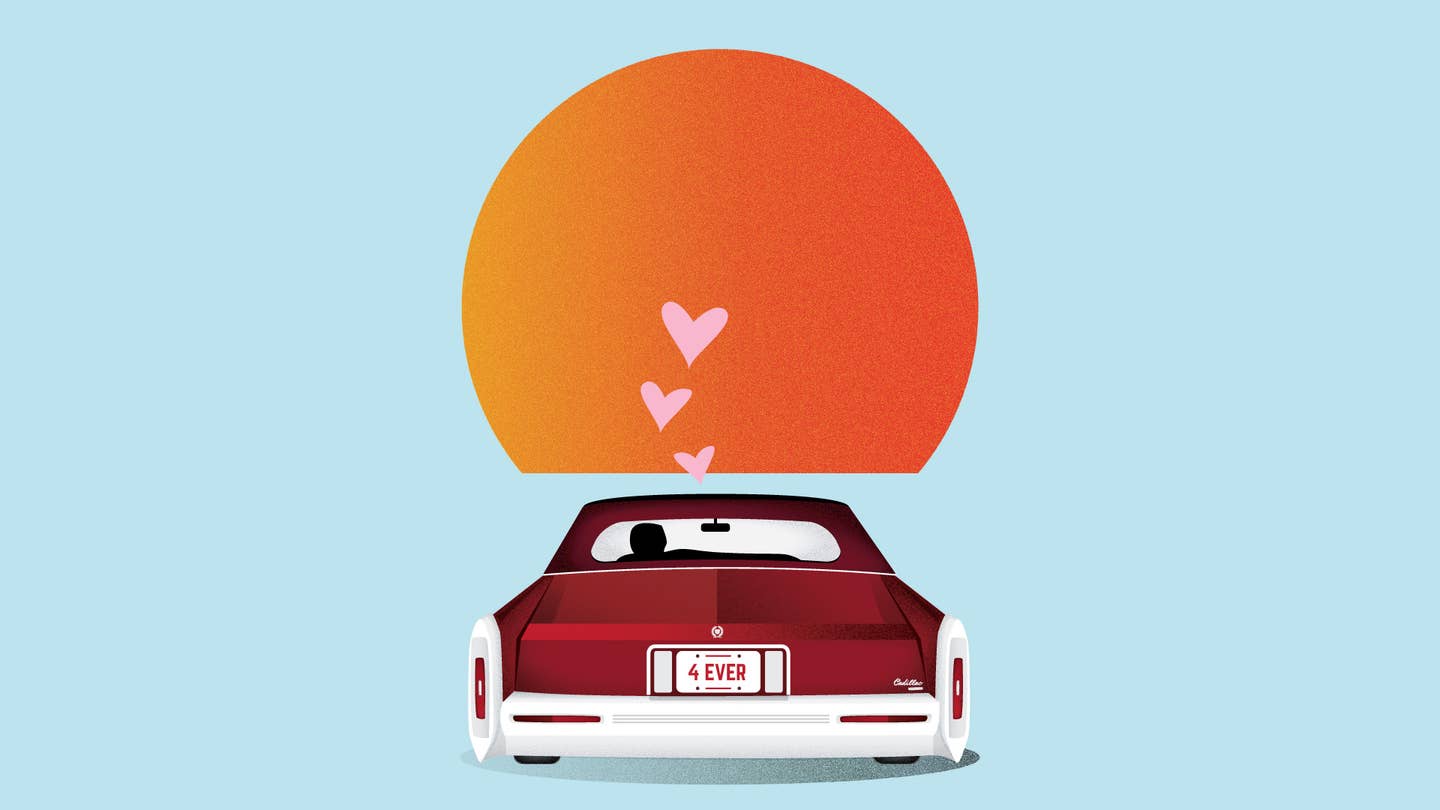 The car that would change the way I think about cars appeared first as a listing in the Des Moines Register: “'88 Cadillac, great condition, privately owned, looking for best offer.” This was in the summer of 2002, prior to my junior year at Iowa State, in the final days before Craigslist’s ubiquitous terror; my ’84 Camaro had broken down for the last time and my dad and I had taken to the classified section of the paper to find the IROC’s replacement. We held perhaps an unhealthy—or at least cheesy—affinity for vintage American muscle cars and had already looked at a ’78 Corvette, silver, with that dramatically curvy and snout-nosed body particular to those years. The owner wanted $7,000 for it, and I was a college kid whose student loans covered his tuition. I didn’t need more debt. But I was willing to take it on because, again, the cheesy affinity—until we drove to the shaded suburbs of Des Moines, and met with a middle-aged man whose recently departed mother owned the Cadillac.

It was maroon red, from the full-sized Fleetwood series, and the Brougham d’Elegance insignia on the vinyl hood meant this was the ultra-luxurious version: leather seating, power locks, climate-controlled interior, room for six. The thing must have been 20 feet long. It looked beautiful. “My mom just drove it to church and back,” the man said, and as if to prove it he opened the driver-side door and had us peek at the odometer: 40,000 miles.

“That’s it?” I asked, because this was of course 14 years after the car’s release.

I began a mental calculation: If a guy on campus differentiated himself by tricking out his SUV or dropping an extra-bass-y Bose system into his muscle car, what kind of statement could I make with that red hood stretching way out before me? In the age of the ironic t-shirt, wasn’t this the perfect gag purchase, a car so anachronistically big that even the president of Cadillac thought the model too unwieldy? (“Over my dead body,” former president Bob Stempel had said, when asked if Cadillac would go back to full-sized sedans.)

Okay, sure, we can snicker at its almost debauched roominess, but isn’t it nice that we can stretch out like this? That we never feel a thing while driving through a construction zone?

So I bought it, and the car was a massive hit: the one that everyone pointed to and asked to ride in at tailgates; the one my friends and I huddled around for pictures, as if it were an aristocratic heirloom; the one that quite a few co-eds loved. On a campus of 25,000, it’s tough to be widely known for anything if you’re not the quarterback of the football team, but for a surprising amount of people I was the guy who drove the big-ass Caddy.

The summer of my senior year I took it to New Jersey, 18 hours straight across I-80, where I lived with a friend while I interned at a magazine in New York. Just before the internship ended I got a job offer at an alt-weekly newspaper in Phoenix, and so the Caddy took me 18 hours back west, straight through the night and heavy construction around Chicago, until near dawn I made it to my parents’ farm in Iowa, where I rested for a couple days before heading out again.

Over the course of that year my feelings about the car had begun to change, and by the trip to Phoenix I no longer saw it as my ironic take on life. I just flat-out loved the beast. Its big V8 could keep pace with any car, but it did so quietly, a low-hummed purr. The joke that my college friends and I had made—“It’s like a couch on wheels!”—took on a new appreciation during that 24-hour haul to the desert, which had followed so closely the 18-hour haul to the Midwest: State after state passed and yet behind the wheel I never grew restless or sore, and realized somewhere around El Paso that this was the most comfortable ride my 6’4” body had ever known.

I arrived in Phoenix on a day that was 121 degrees, but the Caddy was indifferent to the environment, and ultimately guided me to an apartment in Tempe, the first I’d call my own. The car was as big a success with my colleagues as it had been with my college friends, but now I felt a strange urge to counter the snark I once invited: Okay, sure, we can snicker at its almost debauched roominess, but isn’t it nice that we can stretch out like this? That we never feel a thing while driving through a construction zone?  I was a 22-year-old man acting like a 70-year-old retiree, but dammit, the Caddy was worth defending.

“It’s been stripped for parts,” the cop said. “You’ll need to take a look yourself.” I breathed hard into the receiver, trying to hold back tears.

The only problem was I hated Phoenix; the unrelenting sun and brown-hued death of the desert depressed me. So a year later I took another job, at another alt-weekly, in Dallas. I hooked a U-Haul trailer to the tail of the Caddy and maneuvered 40 feet of vehicle out on a shimmering I-10. The trip wouldn’t become truly perilous until two days later, when I hit Dallas at rush hour, and tried to merge onto alien freeways with side-view mirrors that didn’t reveal all that much. I worried about my safety, but I fretted over the Caddy’s, and how awful it would be if it got dinged. I drove far too slowly, horns honking all around me. But you must protect what’s truly yours.

I found an apartment 10 minutes from the paper’s downtown office, and drove the Caddy on reporting trips, to see black activists in South Dallas and old white ladies in Highland Park. The reaction was the same: “Now that’s a nice car.” And it was. I serviced it regularly, washed and vacuumed it as needed. It had been across the country one and a half times now, but it still started up effortlessly, still hummed on the freeway, still glided over Dallas’ notoriously pot-holed streets.

Then the price of oil rose. And then it rose again, and it became hard to ignore how the Caddy burned, say, a half-tank of gas for a Willie Nelson concert in Fort Worth. But I couldn’t part with it. I drove it one night in July to a wine bar in Addison, a northern suburb, for a meet and greet among media people, and saw across the way a stunning black-haired woman nursing a Sprite. We huddled in the circles of various conversations, until at last, we could talk alone. Her name was Sonya and she asked how I got to Dallas. The only way to tell that story was to start in Iowa, which led to a follow-up question about the car I’d used to get me across the country. I said I drove an ’88 Cadillac.

“Really?” she said, her eyes widening.

“Yeah,” and nodded, with a faux solemnity that wasn’t really all that faked. “It’s outside if you want to see it.”

In the dusk of a muggy evening I remember her pacing round the Cadillac and then saying, breathlessly, “Wow.”

We started dating; among our many similarities, Sonya understood the car’s appeal, how it was ostensibly a joke but so much more than that, too. She lived in a studio downtown, a couple blocks from my work, and I began leaving the Caddy in my office’s outdoor parking lot after hours and on weekends. A few months later, she asked if I would meet her parents in Houston, and so one Friday night, I locked the Cadillac in its familiar spot, and walked the two blocks to Sonya’s building, where we loaded up her car for our weekend jaunt.

When we got back Sunday night, she drove me by the office. The outdoor lot was secure enough, enclosed by a chain-link fence, with everyone who routinely parked there getting a key fob that lifted the wooden barricade that stretched across the exit lane.

We stopped in front of the lot and…I didn’t see my car. I shot Sonya a confused look and said something like, “I parked here, right?” But of course I parked here. It’s where I always parked. I walked around the exit lane and into the lot, dread rising up my throat, and saw shattered glass where the Caddy had been.

The crime fell in place quickly. Whoever had broken the window had then hotwired the car, and because I had been dumb enough to hook the key fob over the driver-side visor, the thief hadn’t even needed to bust through the lot’s unmanned barricade.

A couple days later I got a call from the cops: It seems they’d found the vehicle I’d reported stolen, in a South Dallas slum. I asked the officer on the line how the Caddy looked; I’d held out a perhaps naïve hope that it would be fine and drivable.

The officer paused a moment. “It’s been stripped for parts,” he said. “You’ll need to take a look yourself.” I breathed hard into the receiver, trying to hold back tears.

Sonya drove me to a junkyard the city owned, acres upon acres of battered and commandeered vehicles. I filled out paperwork and waited for what seemed like an hour before a man called my name. We hopped in his city-issued truck and drove to the far reaches of the grounds, past rows of dismembered cars. Then we stopped and the man pointed to something 30 feet away. I got out and walked up to it. Its rims were gone and two tires were flat, the windows were knocked out and the Cadillac ornament was missing, the body was banged to hell and the vinyl stripped off the hood. I just stared at what it was, and only in the truck did I realize I was gasping for breath.

Looking back on it, from the remove of more than a decade, the thing I really loved about the Caddy wasn’t even the Caddy itself, but how it (quite literally) cushioned my entrée into adulthood. I finished school and saw the country and started a career in that car. I met the woman I truly loved in that car. I came of age in it, and when it was stolen, it was almost as if the Caddy had served its purpose, as if it were time for us to part ways. Not long afterward, I proposed to Sonya, and it would have been strange to have the defining emblem of my bachelorhood still with me. (Gas was approaching $2.50 a gallon, so it would have been expensive, too.) You can reminisce about the man you were, but you can’t be that man.

Still, I think about it. The Caddy is a friend who died too young, and probably because I can no longer get behind the wheel and stretch my right arm across the endless expanse of its leather upholstery, I love it all the more.

Not long ago, Sonya and I were in the minivan with our three kids, out on a highway not far from our Connecticut home. She saw it before I did, a vehicle passing us on our left. “Heeyyy!” she shrieked, and there it was: cherry-red, not maroon, but the big hood stretched way out before the bank of windows, and the beast just gliding over the road.

I couldn’t make out the driver well because I kept staring at the car, but I like to remember him  as a young man. And I like to picture him with a smile on his face.