Smokejumping with the 2017 Ducati Desert Sled

A rugged ride through burn-scarred Big Sur changed my mind about motorcycles. 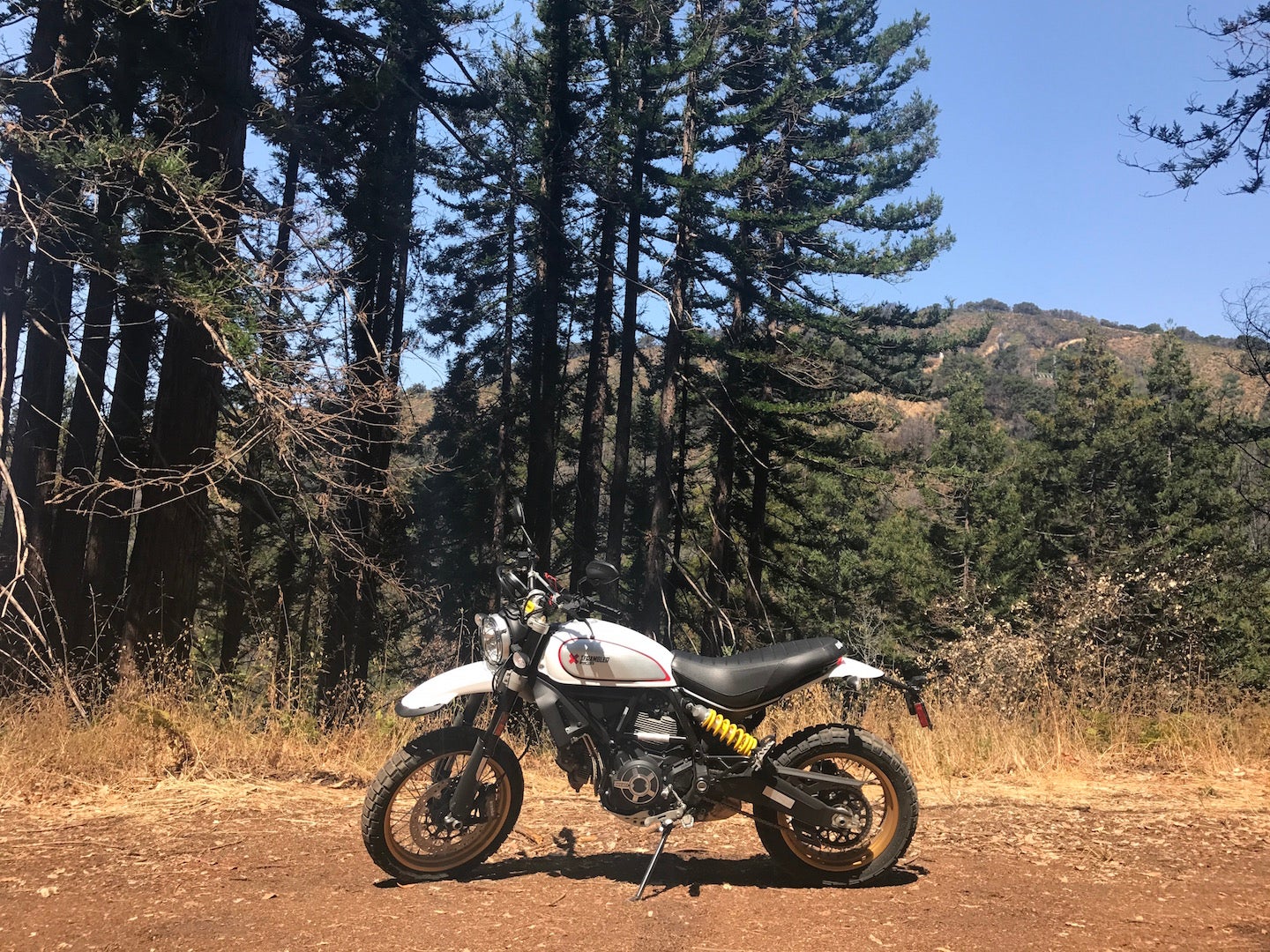 A few years ago, I stopped riding motorcycles. I’m not sure why. I’d taken my lumps and fractures on my bumblebee yellow-and-black Yamaha YZ80 as a kid, sent a friend’s Honda 125 off a cliff, and even walked away from a comically violent high-siding on a Kawasaki KLR650 on the Brooklyn-Queens Expressway.

Eventually, I felt like enough was enough. NYC traffic seemed to be getting more antagonistic. I was having kids. My own physical well-being was suddenly something I cared about.

But time passes. My kids aren't babies anymore. this summer, on a whim, I tested out the Ducati Scrambler Cafe Racer, which the good people of Ducati were nice enough to loan our staff. I made it just three blocks from the office, hunched over the gas tank and shifting up to third gear, listening the lovely metallic thrum of the air-cooled 803-cc L-Twin Desmo engine rang in my ears, when I knew I was going to start riding again.

I passed a platoon of prisoners in orange jumpsuits. They were loading a laundry truck outside the federal prison. I goosed the throttle and downshifting the 6-speed transmission. That sound… The prisoners all stopped and watched, and the intensity of their yearning reached me. We were all thinking the same thing: I want to escape on that motorcycle.

So I did. All the way to Big Sur, the most beautiful place in California.

Ducati had left me a Desert Sled in the parking lot of my hotel. A member of the Scrambler family, the Desert Sled is taller and tougher than the Icon and the Cafe Racer. With it’s white tank, brass spokes and piping, and its agro posture, there's something irresistable about this bike. It's inspired by the custom SoCal scramblers of the 1960s and ‘70s that buzzed the inland dunes, and it's built to withstand irresponsible behavior and the consequences of poor decision making—things I'm quite good at. It made me want ride it like I rode that old, indestructible YZ80 when I was 13.

So I started looking for a place in Monterey to go offroading. The day after I landed, I was standing in line at a CVS in Carmel when I met a firefighter who was behind me with a shopping cart full of bottled water. He looked at the motorcycle helmet in my hand—an Arai Corsair X.

“What are you riding?”

“That Ducati out there,” I said, gesturing to the parking lot.

He craned his neck. “Sweet.”

“Know any cool secret places to get it dirty?”

“I do,” he said. He started talking about the huge fire here a couple years ago that destroyed much of the region. To battle it, the firefighters carved roads deep into the forest. They’re rough, he said, barely roads at all. “Problem is, you can really only get there on foot.”

I felt emboldened. “Well, this is the kind of bike that can go places you can only reach on foot.”

So the next morning, carrying map the firefighter drew hastily on a page in my notebook—I rode down Highway 1 through a heavy mist. It was early, and I’d been up late reading about the big fire. Sometime on July 22, 2015, someone built a campfire in Garrapata State Park, just east of Highway 1 near Big Sur. On the coast, the mountains collide with the Pacific so dramatically  It’s a paradise of coast redwoods, white alders, big leaf maples, and forests of ferns taller than a Sasquatch.

Further inland, the trees turn to coyote brush and sage. Old cattle grazing grasses sweep through meadows. It's dry and sunny once you clear the redwoods and the hills that tumble so dramatically into the Pacific. The summers on California’s central coast are dry and hot. When you ride, or hike, into Big Sur, always bring water and lip balm.

The fateful campfire of 2015 spit out a tinder that carried to something dry enough that set it off. Before sunrise the next day, the dark forest was aglow. The fire burned for weeks. At its height, there were 510 fire engines, 51 water tankers, 72 bulldozers, 17 helicopters, six air tankers, and nearly 6,000 firefighters mobilized in shifts, trudging up Carmel through Valley, along old logging roads and new fire breaks that were carved into the steep valley walls.

By the time the it was snuffed out, the blaze had consumed 43,000 acres.

It’s not just the fire that’s done damage to Big Sur. A series of landslides caused by prolonged drought followed by heavy rains has created natural roadblocks to Big Sur, cutting off much of it from travelers (and civilization). The Post Ranch Inn—a $1,500 a night paradise hotel perched on top of a 1,000-foot cliff—is helicoptering in guests. The Nepenthe, which serves the best french fries in the United States, has been closed for months.

Then, this past May, a massive landslide at Mud Creek covered a quarter-mile of road and created a new 13-acre peninsula in less than a minute. That’s 200,000 dump trucks full of rubble, destroying a sweeping turn a quarter-mile long.

Riding the Ducati south, the air clears. And so does the road. The dramatic cliffs and telegenic vistas of Highway 1 had turned it a goddamn traffic nightmare. RVs, rental cars, tour buses, groups of tourists spilling into the road at scenic turnoffs, texting photos WPA bridges to each other: They’d all turned one of the best drives in the world into a frustrating procession of fools. But the mudslides and other natural calamities have turned it into a 30-mile dead end—perfect for a fast morning ride.

So I raged south in the Desert Sled, the distinctly metallic sound of the Ducati desmo ringing against the hills to the east. With its high fenders, long-travel suspension, and dramatically upswept exhaust and knobby Pirelli Scorpion Rally STR tires, the Desert Sled looks tougher and taller than the other Scramblers, but it’s still an athlete on the road. The Pirellis grab the turns of Highway 1. There’s a lengthened aluminum swingarm that means an overall wheelbase of 53.9 inches. The added stability is helpful at high speeds. And I need it, because I haven’t had my morning coffee yet.

I turn onto Palo Colorado, a narrow road that runs east off Highway 1 (west is the ocean). The road passes through a grove of alders and then weaves through a narrow, dark corridor lined with redwoods that lean toward me. Wet moss holds onto the cold night air. As the road turns to dirt, I pass more houses, and the quick aroma of bacon drifts out of one. The walls of the valley are steep.

After a few miles, I reach a gate. Beyond this is the fire break and the center of Big Sur. I’m following a vague map drawn by the firefighter on a page in my notebook. I asked him to point to the location of the campfire that started the whole thing.

I put my helmet on, start up the Desert Sled, find first gear and channel all that youthful fearlessness. There's a gap in the gate, and I navigate the Desert Sled through it slowly. There's now a sort of barred smell in the air, even though the fire's been out for more than two years. All the trunks of the alders and redwoods bear the scars of the burn, even as the branches are growing new leaves and needles. Forests burn, forests recover.

The road I'm on is entirely new—created by the firefighters to cut off the fire as it radiated out from the epicenter and toward houses. The unpacked lanes and soft soil challenges the Pirellis, and as I slowly ridges and navigate the abrupt turns, rocks and roots hiding in the ground test Desert Sled's offroad cred: The bike's ground clearance is 9.4 inches, thanks to a longer 46-mm KYB fork and a KYB rear shock (they each have 7.9 inches of travel). A skid plate protects the oil cooler, and is unique to the Desert Sled.

As I enter that beatific trance state that only a long offroad ride through a place like Big Sur can create, the true capabilities of the Ducati become clear. This is not a dilettante's dual sport. It's not top heavy or leaden. It is lithe and quick on the tough stuff, perfectly balanced, with its higher handle bars and a seat height around 34 inches. Despite the weight—the revised frame and offroad components add up to 456 pounds—I'm never bogged down or uncertain.

It has all that joyful exuberance of the old YZ80, and the stability that a 170-pound man with an aging back demands. After 10 miles navigating the firefighters essentially useless map, on a road that doesn't really exist, I decided I need to buy one. All the qualities it brings to the streets and hills of Big Sur would actually translate perfectly to my hometown of Brooklyn, where the decrepit roads and gnarled traffic often simulate an off-road ride on unpredictable terrain.

I never found the campfire, butI didn't care. I'd found something much more important. It's time to buy another motorcycle.