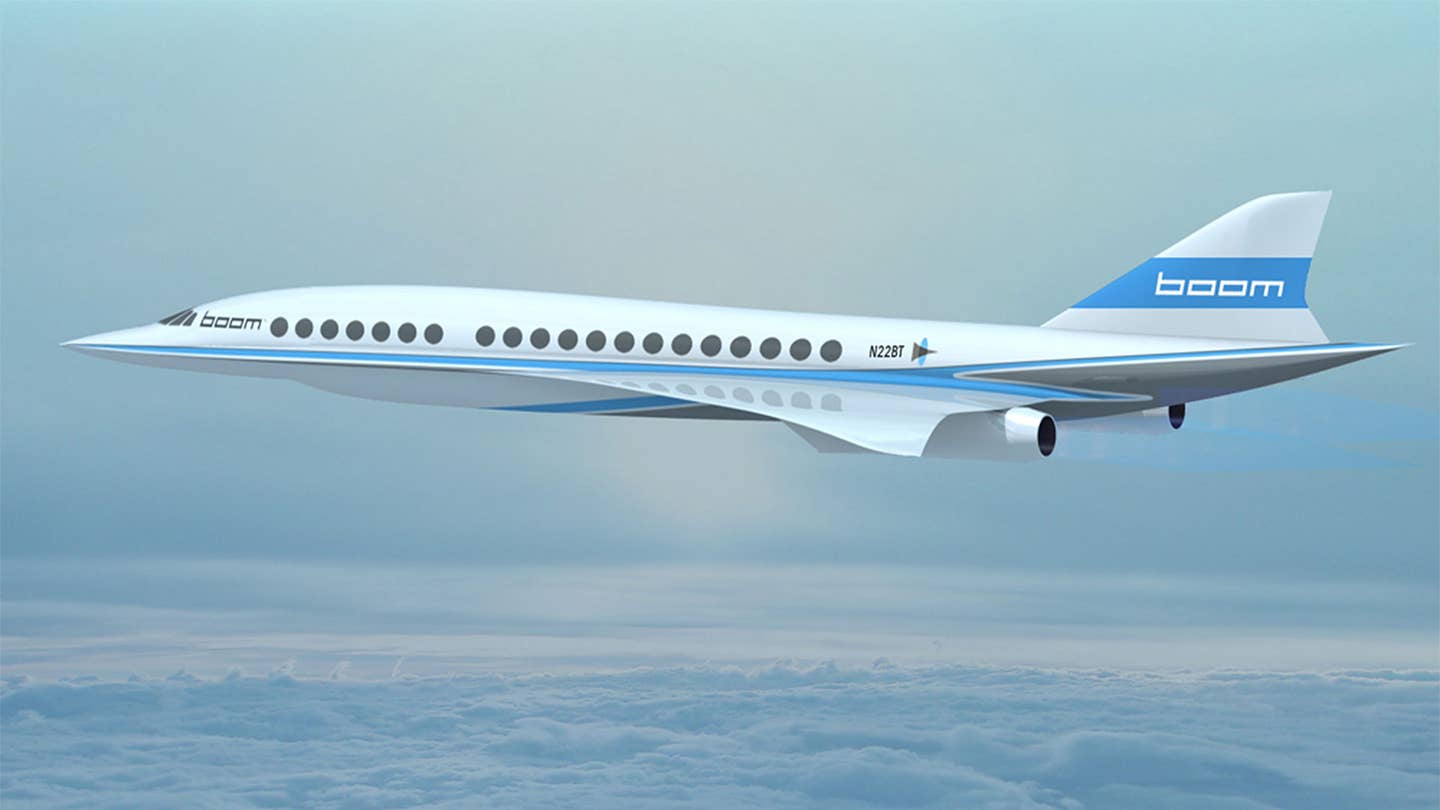 In spite of some experts refusing to buy in, the dream of supersonic passenger flight is gaining speed. Nevada-based Aerion Corporation is working with Airbus on the Mach 1.5 Aerion AS2 business jet that will seat eight to 12 passengers. NASA recently announced $20-million award to Lockheed Martin to develop the N+1, a five- to ten-passenger jet with Quiet Supersonic Technology (QueSST) engines. Now Colorado-based startup Boom has inked a funding deal with Richard Brandon’s Virgin Group that includes an option on the first ten of its 40-passenger supersonic jets and technical assistance from Virgin Galactic. The tiny company only has $2.1 million in seed funding, but combined with a 15-plane order from an unnamed European airline Boom has $5 billion in potential revenue on the books.

The carbon composite airframe houses two rows of 20 seats – everyone gets a window and an aisle – but withdomestic-type first class seating to save weight, so no lie-flat beds. The specs that lured Branson are a flying speed of Mach 2.2 at 60,000 feet and comparatively cheap tickets. The speed of sound varies depending on altitude and temperature so we’ll skip the science, the big deal is that a Boom flight would halve the time fromNew York to London to 3.5 hours, for the cost of a $5,000 round-trip ticket. That’s faster than a Concorde – and about one third the price in today’s dollars. San Francisco to Tokyo would take 4.7 hours and cost $6,500 for the round trip, LA to Sydney would total six hours and cost $7,000, there and back.

Boom founder Blake Scholl – who made his money as a programmer at Amazon and selling an app to Groupon – has this vision of the future: “San Francisco to Tokyo will take four and a half hours, you can leave in the morning have meetings, eat great sushi and be back in California before midnight on the day you left. This is not saving you an hour here or there, this lets you commute.” That’s a Jetsons-level prediction, and we love it.

The dream is young, though. Boom only moved out of Scholl’s basement in January, into John Denver’s old hangar at Centennial Airport in Denver. The 11-employee crew, on the other hand, is experienced, with engineers who’ve worked on more than 30 aircraft including the 787, fighter jet engines, and Virgin’s Spaceship Two.

The aerospace firm plans to begin subsonic testing of a one-third-scale prototype by the end of 2017. If that goes well, it will move to supersonic prototype testing at Virgin Galactic’s facilities near Edwards Air Force Base in California. Virgin Galactic’s manufacturing arm, The Spaceship Company, is providing technical assistance in the form of “engineering, design and manufacturing services, flight tests and operations.”

Scholl doesn’t have a timeline for commercial flight, but he does expect to beat Airbus and Lockheed to market by using off-the-shelf parts tweaked for purpose instead of creating new technologies. That probably puts Boom at a launch around the mid-2020s, a highly optimistic timeframe. Still, we’re going to go ahead and pencil in a four-day weekend in Cape Town in July 2023.