An abject lesson in how not to safely apprehend a subject. 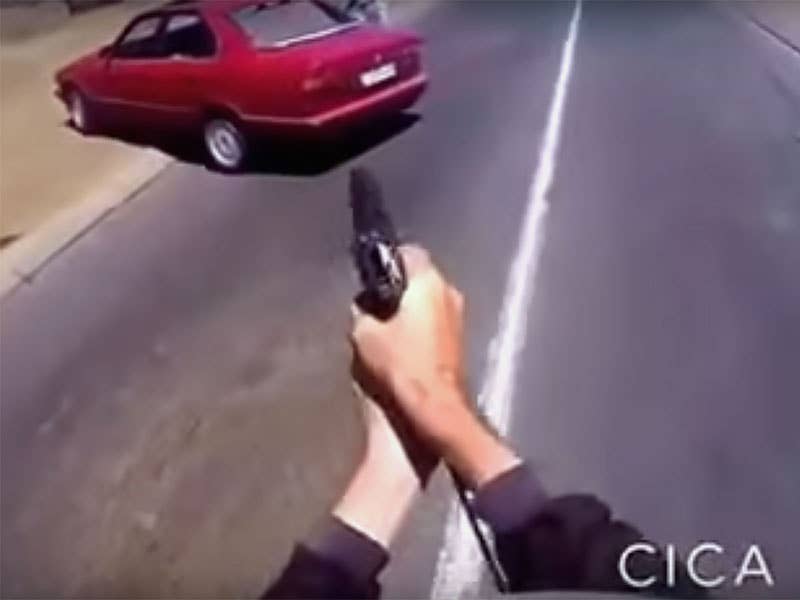 It’s been a topic of much debate, lately and tragically: When, and how, should humans wield guns?

Murder, the South African sprinter Oscar Pistorius recently illustrated, will move you from house arrest to jail. Now, elsewhere in South Africa, the Pretoria police are showing off what we can only describe as the misuse of a firearm. In the video below, a single cop chases after a BMW on a motorbike, shooting wildly as a they parade through the city. The wheeled officer fires at least a dozen shots at the Bimmer before it rolls to stop, disgorging one surprisingly calm man onto the street.

We’re unfamiliar with the Pretoria Police Department’s handbook on best practices regarding gun use—it’s between War and Peace and Infinite Jest on our “to read” stack—though we can’t imagine shooting past civilians on a public street gets a ringing endorsement, especially from a motorcycle, which definitely requires two hands for safe operation. Further, opening fire on a fleeing, presumably criminal party welcomes fire in return, and unless this officer was able to contort himself behind a tiny, bullet-susceptible windshield, a motorcycle provides little shelter. Similarly, is ricochet a worry? Blasting bullets at a potentially armored car means flinging projectiles at steel panels which may well fling them back.

In the end, everyone emerged unscathed, the door panels on an early Nineties BMW 525i the only casualties. A lucky, if unlikely, outcome after a trigger-happy car chase on a public road.

Tale of the tape below: