Self-Driving Technology Is Not an iPad, Stop Marketing it Like One

The casual negligence of Intel's new "The Future of Autonomous Driving" commercial. 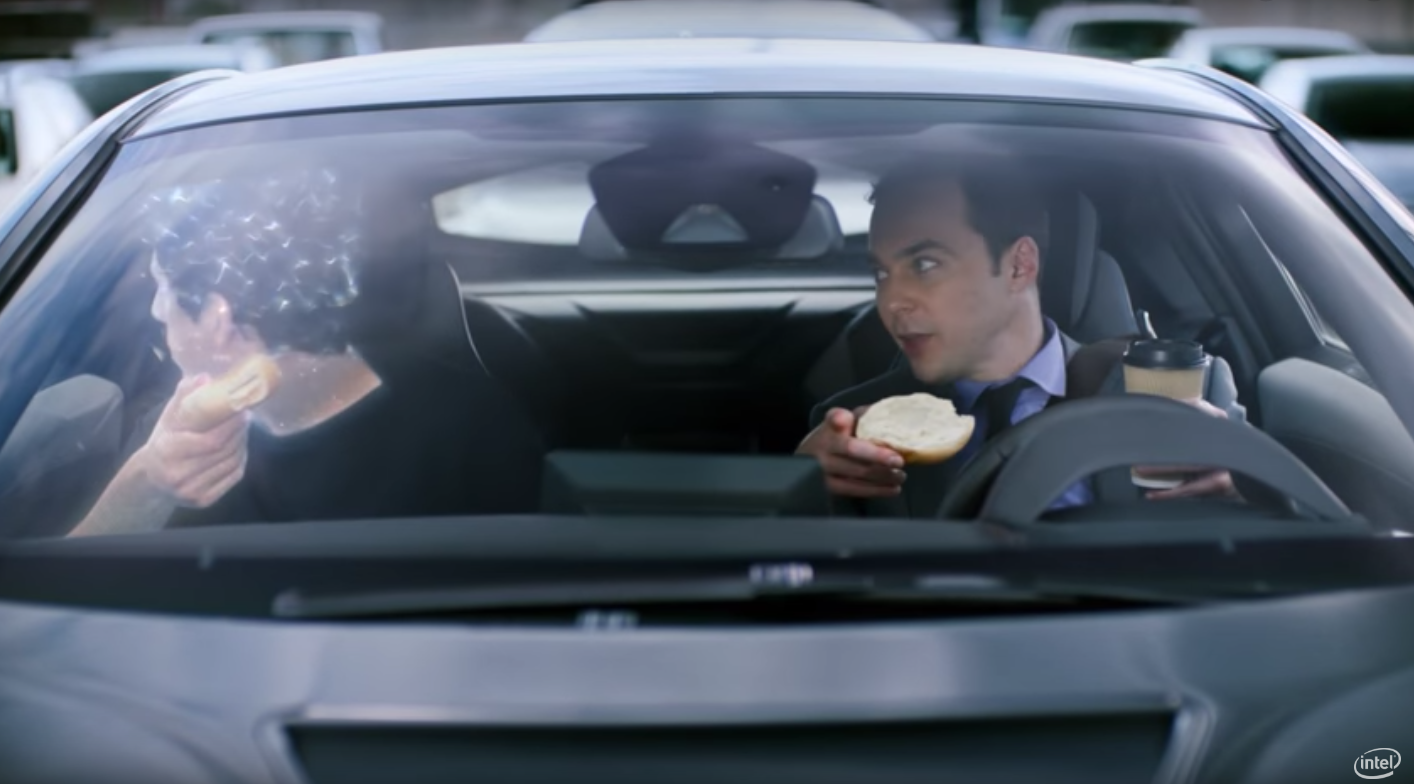 I have to admit that a part of me, however small, believed that just maybe we had already fixed this sort of thing in one fell swoop. But then I noticed an Intel commercial about "The Future of Autonomous Driving," which began airing in April:

There are a few issues here. Let's start with the wonky and immaterial: Jim Parsons and "The Future" character (apparently a modern and less lag-prone Max Headroom by way of Seth Green's character in Can't Hardly Wait) are being robotically chauffeured in a BMW i8, which in production form offers zero autonomous capabilities.

That discrepancy doesn't bother me. Far more significant is that, in a present-day scenario, Parsons indicates the vehicle when referring to "autonomous cars," suggesting he's in an autonomous car, further backed up by the fact both hands are full and he makes no effort to engage with the steering wheel. Perhaps worse, the video description makes it clear this is the exact commuting scenario towards which we all should strive:

Meet The Future. He knows Intel's helping to build 5G networks and the autonomous vehicles that will run on them, which will free up our hands and eliminate traffic jams. With the ability to enjoy your morning bagel again, the stress-free commute is almost here.

Intel's suggestion that autonomous cars are currently on the road is a problem, as is its advocacy that eating breakfast in your car is somehow triumphant.

Point one: To be clear, autonomous cars do not yet exist as an available consumer good. (Intel admits as much during the commercial but only in the fine print, fine print in a commercial being useless except as a legal shield, writing: "BMW self-driving cars are not available.") There are high-performing autonomous experiments, completely separate from production cars with varying levels of self-driving capabilities under certain conditions. The Traffic Jam Assistant in BMW 7-Series will steer the car for you in low-speed congestion situations the same way shown in the commercial. But even BMW, which works with Intel on self-driving technologies, will say that neglecting the potential need to take the wheel at a moment's notice is essentially negligent use of their system. (Neither Intel nor BMW responded to requests to clarify their respective positions on this commercial.)

Point two: If your goal is to more pleasantly consume your bagel while commuting, rather than finding the time to enjoy that bagel in a better locale, you are making the wrong life choices. (The only situation in which this is acceptable is if you're living out of your car, at which point, definitely enjoy that bagel to its fullest.) It's no doubt meant to be cutesy and winking—man, aren't we all just so busy?!—but since marketing is simply a way to exploit the fact that we're hardwired to react to social cues but can't fundamentally tell the difference between our actual peer group and a grinning idiot on the living-room glowbox, it borders on the cruel to promote such an essentially shitty way to live.

If marketing does its job, then both messages—1.) efficiency is happiness; 2.) an advanced safety system can obviate the need to engage with your car and the world around you—will be similarly, mindlessly absorbed. The first is insidious, the second dangerous. People have already misused these autonomous systems, sometimes fatally ("misuse" being a euphemism for "human error") and we're still in the early-adopter stage. As automotive technology and personal technology converge, it's important to realize that unlike most every personal technology combined, automobiles kill over a million people globally in a given year—and cars are only becoming more ubiquitous. (Up until a few years ago, a non-elderly relative of mine believed she could only access her email from her personal computer; let's just say I don't trust everyone to do their due diligence when it comes to supposedly user-friendly technologies.) You can't market autonomy like a cell phone, or a two-gallon of Diet Dew—the stakes are higher.

This is where the old-school conservatism of the auto industry will hopefully win out over fail-fast Silicon Valley tech-think: cars have been killing people since invention, through automaker- and human error alike, so legacy automakers understand the gravity of the situation better than perhaps Intel, or even Tesla, can. If BMW did approve of this content, they should have known better.

If Intel wants us to trust that they know The Future, first the company should prove it will act responsibly in the present.