Sebastian Vettel takes second place and is now tied with Hamilton for the lead of the Driver's Championship. 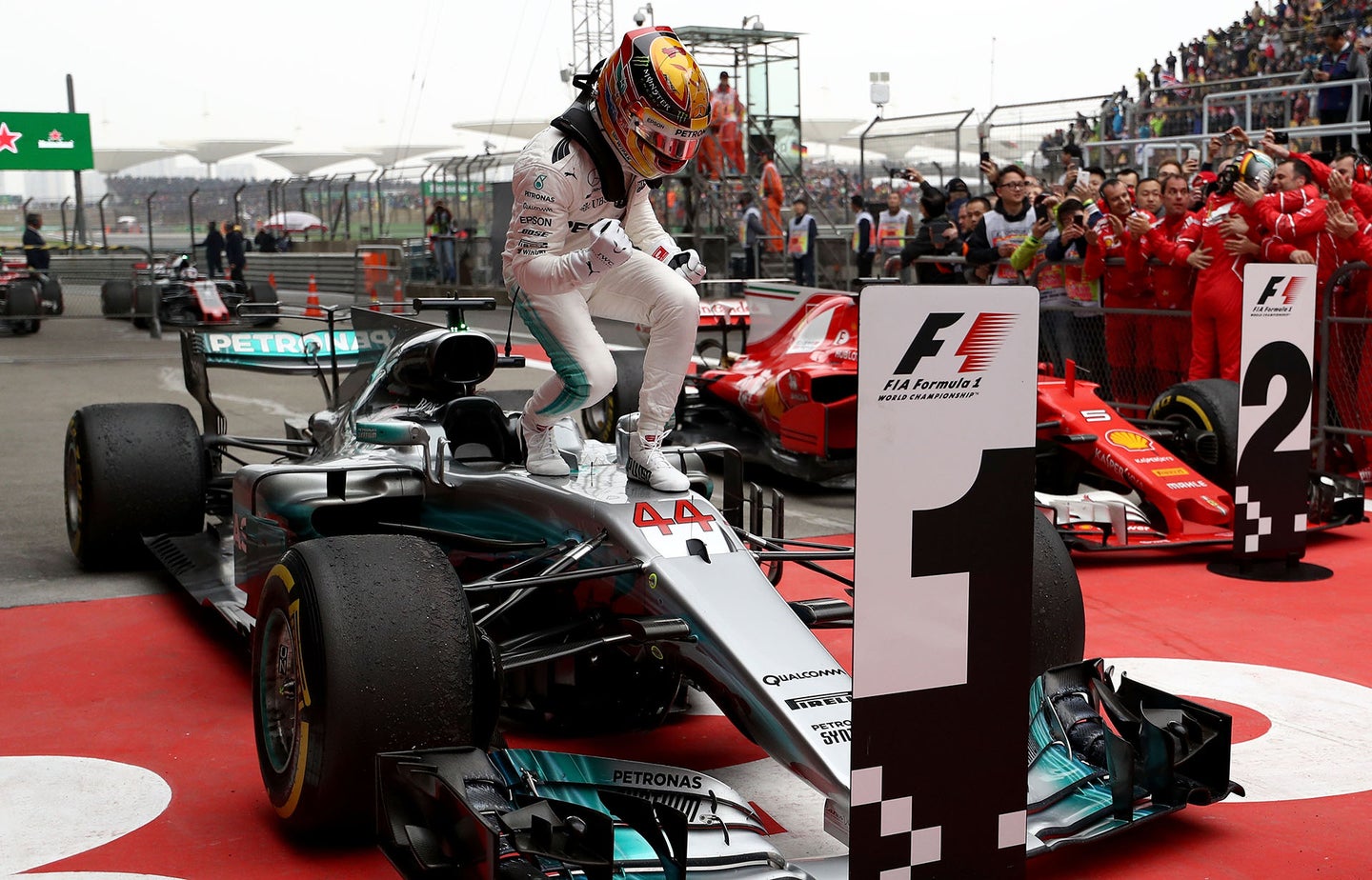 Mercedes and Ferrari continued their battle royale from the season opener into this weekend's Chinese Grand Prix. An hour before the green flag, the rain had stopped at Shanghai International Circuit. With temperatures in the low to mid 50s and heavy cloud cover, the track would be evolving from wet to somewhat dry as the race got under way. These conditions greatly reward bravery, while stupidity is often punished with a quickness.

The field, with one exception, all started the race on the intermediate wet tires. Toro Rosso's Carlos Sainz started from 11th and was on the slick and sticky super-soft tires. This could prove to be either a very brave or very stupid decision.

As the green flagged dropped, Hamilton made a great start, pulling a decent gap over Vettel, who held off the other Mercedes of Valtteri Bottas going into Turn 1. The first complex of corners at Shanghai International Circuit is difficult enough in ideal conditions. Today on a very damp track, a combination of skill and luck got everyone through cleanly. Max Verstappen took his Red Bull from 16th to 11th by the time he exited the complex at Turn 4, and then up to 10 by Turn 5. He somehow found every gap possible and forced his way forward.

A few turns later, Sergio Perez tried to squeeze his Force India under the Williams of Lance Stroll. They touched wheels, punting Stroll off into the gravel. A virtual safety car was issued. Vettel and the bulk of the field headed for the pits to get off the wet tires. Hamilton, Bottas. and handful of others stayed out.

As for Sainz, his bravery paid off. He was vaulted up the order. In a post-race interview, Sainz said he was second guessing the tire choice when he saw that he was the only one starting on slicks. The moment the virtual safety car hit, he joked that he thought to himself "Who's the clever one now? I'm not so stupid anymore."

Mercedes took a risk keeping their drivers out on wet tires. The plan seemed to be to run like hell for two or three laps. With enough of a gap created, Mercedes could pit their cars, get on to slicks, and still retain the lead. Brave or stupid?

That question went unanswered as luck took over. Just as the race got going again, Mercedes caught a break. It came in the form of Antonio Giovinazzi. He lost grip on a wet patch, which sent him spinning into the wall on the front straight. This was damage the Sauber team could little afford as it was Giovinazzi's second big crash of the weekend.

The safety car was deployed. Mercedes was able to get off their wet tires without risk of losing the lead. With everyone pitted and back on track, the running order up front was Hamilton, Ricciardo, Raikkonen, Verstappen, Bottas, Vettel, Alonso, and Sainz. As the safety car was getting ready to come in, Bottas spun on his cold tires. This knocked him back to 12th. Lewis would have no wingman as the race went back to green.

The Red Bulls and Ferraris had their own war going on, allowing Hamilton to pull away. The overtaking spot du jour was Turn 6. After first passing Raikkonen, Verstappen took Ricciardo in Turn 6. Vettel soon passed Raikkonen in the same spot.

A few laps later, Vettel tried to sweep around the outside of Ricciardo, but ran a little wide. Somehow Vettel exited the turn side by side with the Red Bull. The two former teammates banged wheels as Vettel passed, moving up to third. Vettel then caught up to Verstappen and forced the Red Bull driver into an error. Verstappen locked up in Turn 14, allowing Vettel to slip by up to second.

By this point, the 10 second gap to Hamilton would prove too great to overcome. Vettel was told he needed to best Hamilton's lap times by 0.7 seconds in order to just catch him. With both cars so evenly matched, closing that gap was impossible.

Both Red Bulls stopped again for fresh tires and had a fantastic fight for the the final spot on the podium. In the closing laps, Verstappen was leading the pair, with Ricciardo reeling him in through each corner. Lap after lap, Ricciardo was setting up the pass. On the final lap of the race, Ricciardo made a lunge in Turn 6, but couldn't get the job done. This gave Verstappen enough breathing room to hold on to third.

Hamilton's victory ties him with Vettel for the driver's championship lead, but Mercedes has a one point lead in the Constructor's battle. Verstappen again had an amazing race in tricky conditions, coming from 16th to finish 3rd. But sadly for Red Bull, that third place was 45 seconds behind Hamilton.

Force India brought both cars home in the points, taking the 9th and 10th spots. Kevin Magnussen kept his head down, finishing 8th and scoring his first points for Haas. Sainz ended up 7th, while Bottas recovered to 6th, leaving Raikkonen to take the 5th spot. Alonso had a good chance to score points, but  McLaren had another heartbreaking double DNF.

Though he wasn't nipping at the heels of Hamilton towards the end, Vettel's pace was equal to that of the Mercedes. The threat from Ferrari kept Hamilton honest. He had to push hard until the end or Vettel would have caught him. This bodes well for the rest of the season. It appears that 2017 will bring the epic battle of Ferrari versus Mercedes that fans have been waiting. Vettel and Hamilton will be the men to beat, but they have very capable teammates who will likely be challenging for race wins during the year.

It's been a while since Formula One had two teams fighting it out up front. It's beyond refreshing to watch. Even Hamilton and Vettel are loving it; at least for now. Having two of the best drivers the sport has ever seen duke it out for the championship is special. In an era where one team dominates for years at a time, it's nice to watch some real, competitive racing.

The drivers and teams seemed to have gotten their heads around leaning on the cars in race conditions. They know you can follow closely. They know you can make diving passes. The racing should very thrilling as the season progresses. In just one week, Formula One heads to Bahrain. The race has a reputation for being less than exciting. With Mercedes and Ferrari so close, it will be worth watching.