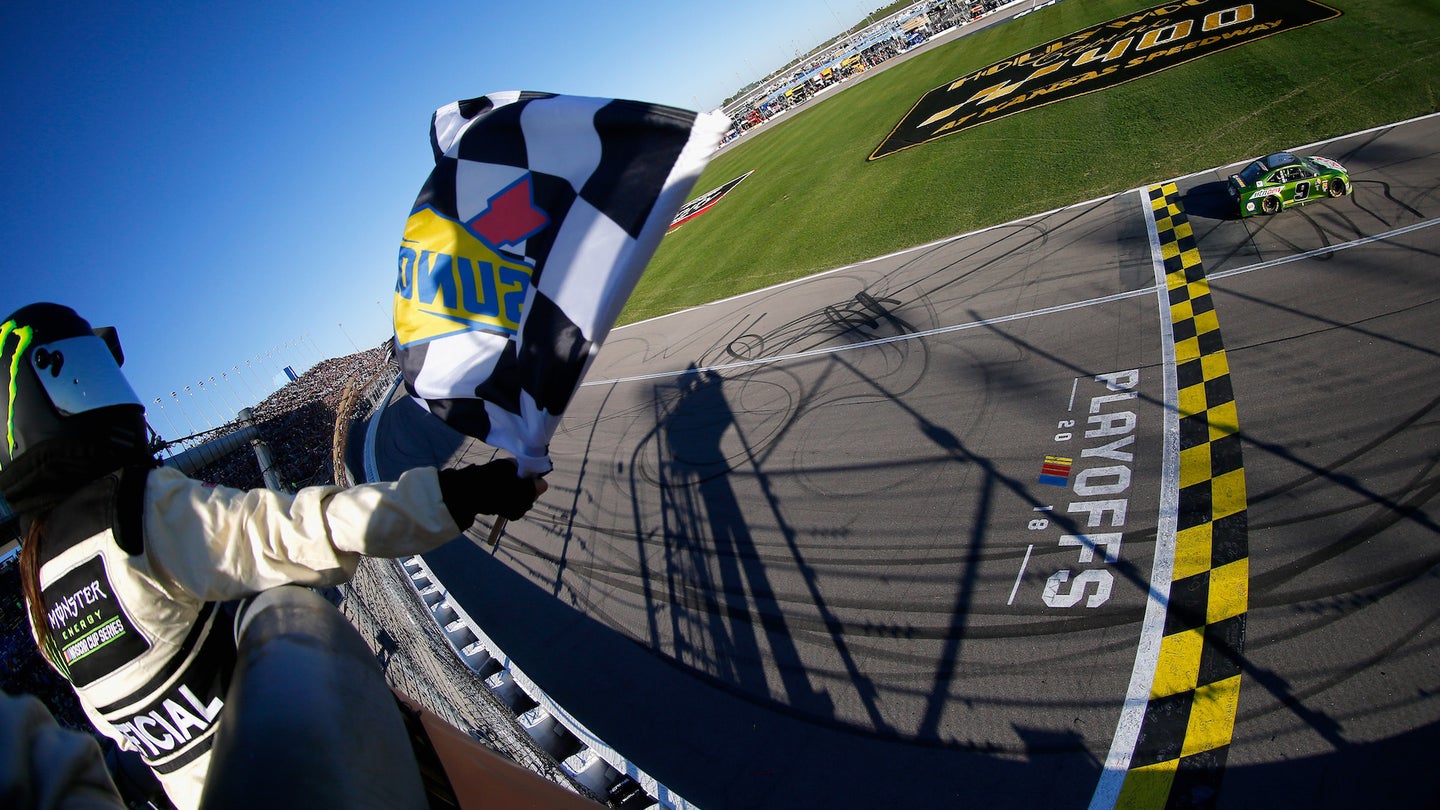 Chase Elliott claimed his third-career NASCAR Cup Series win and his second of the 2018 playoffs Sunday when he took the checkered flag in the Hollywood Casino 400 at Kansas Speedway.

"I feel like we are among those guys that you have to beat, and I think that is all you can ask for," Elliott said. "I think we still have room to improve, but the last month or two has been way closer to where we need to be."

Kyle Busch battled Elliott late in the race but drifted back into a battle for second with Kyle Larson in the closing laps. Busch maintained the position for runner-up honors, relegating Larson to third.

Larson fell two positions shy of playoff advancement after starting the race from the rear in a backup car because of a crash in Friday’s practice session. Larson was nearly in a must-win situation to advance in the playoffs, and that was magnified by a 10-point penalty from a rules infraction at Talladega Superspeedway just a week earlier.

Other drivers failing to advance in the playoffs included Ryan Blaney, Brad Keselowski, and Alex Bowman. Keselowski tried a strategy of staying out several laps longer than his fellow competitosr during two green-flag cycles of stops, hoping to get a caution. The strategy didn’t pan out either time, and he actually` lost ground on his older tires. He recovered to finish sixth.

“I would say about the end of that first stage, it was pretty obvious that we needed something after I saw some things on the other cars,” Keselowski said. “We needed something to step up, but it just wasn’t there. We just weren’t as good today as we were yesterday, and I am not sure why. Everyone else seemed to find a little from practice, and we were about the same, maybe a little worse than we were in practice. I am proud of what we did down the stretch of the year. We won three races and did all that. I feel like we can go win Martinsville next week, so I am excited about that, but of course, the ultimate goal is to win a championship, and we won’t have an opportunity to do that this year.”

All four drivers eliminated from the playoffs after the Hollywood Casino 400 finished the race inside the top-10.

The yellow flag waved only three times throughout the 267-lap race. The only caution aside from the two at the end of each of the 80-lap stages came on Lap 57 when William Byron blew his engine and leaked fluid onto the race track.

Joey Logano dominated the first half of the race after starting on the pole. He won the first stage and led 100 laps before a cycle of green-flag stops around Lap 120. Kevin Harvick was the race leader after the cycle completed.

Harvick, then, was a mainstay up front and won the second stage, but a pit road speeding penalty during the final green-flag pit cycle just past Lap 200 took him out of contention for the win. With Harvick out of the picture, Elliott, Busch, and Larson cycled to the top-three positions in the running order.

“Today wasn’t great from my standpoint. Our Busch Lite Ford was really fast and leading the race, there, and I got a speeding penalty,” Harvick said. “That was my fault. I tried to get a little too much and wound up going too fast. We will take it one week at a time. We have had fast cars, and whether it is speeding on pit road or flat tires or valve stems or fuel, we haven’t put together a full day except for Richmond. Hopefully, we have gotten all that out of our system, and we can go to Martinsville and start off good.”

Harvick, though, was already locked into the next round of the playoffs on points. All four Stewart-Haas Racing drivers, also including Kansas native Clint Bowyer, Kurt Busch, and Aric Almriola, advanced in the playoffs, giving SHR exactly half of the entries in the round of eight. Like Harvick, Busch and Almirola also suffered pit-road penalties, theirs for uncontrolled tires.

Other drivers advancing in the playoffs include Kyle Busch, Martin Truex Jr., and Logano.

UP NEXT: With the 2018 playoff cast of drivers whittled from 12 to eight, the Monster Energy NASCAR Cup Series will kick off its third round, or round of eight, at Martinsville Speedway in Virginia on Oct. 28. Martinsville is the only short track in the 10-race playoffs. Kyle Busch is the defending winner of the playoff Martinsville race, while Clint Bowyer won there earlier this year, in March for his first of two Cup Series wins this season.