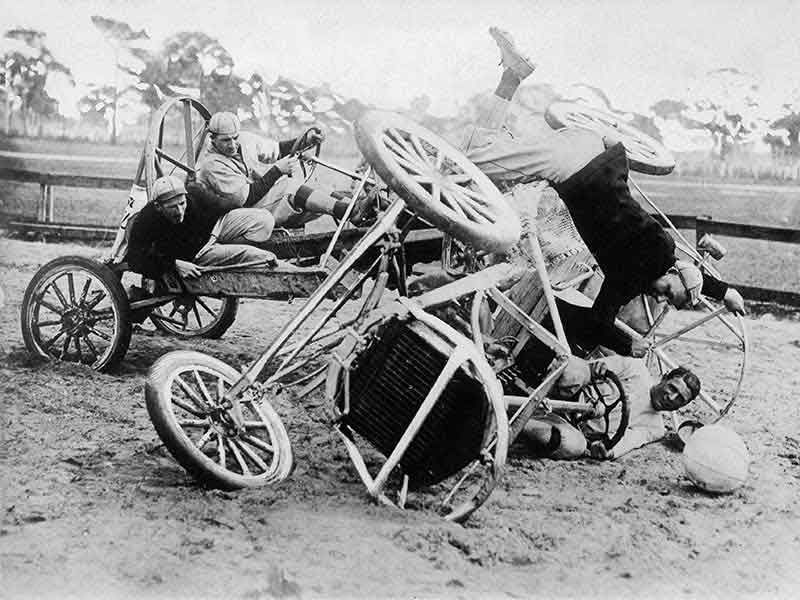 In its infancy, people figured the automobile a kind of plug-and-play replacement for horses. It was not. Here, we bring the ensuing calamity to your attention: Meet motor polo, which is exactly what it sounds like.

The first mention of motor polo appears around 1902. Within a decade, the sport had grown enough to merit a feature story by R.H. Morrison in Technical World Magazine, which outlined the game in fantastic detail. Four periods, ten minutes each. A 1,100-foot-long field, goalposts at each end, set 60 feet apart. The rules are described as follows:

“Four stripped cars are used, each carrying a driver and a mallet man. On the forward cars, which did most of the playing, the seats were removed, leaving one small seat for the driver. A taped post served for the mallet man or “jockey” to swing on while he wielded his heavy mallet from the running board of the car. The goal-tending autos simply maneuvered bear their points of defense, taking no part in the battling in the middle of the field. An air-filled ball, about the size of an ordinary basketball, was used, and practically the same rules that govern ordinary polo obtained.”

According to Morrison, this combined “all the dangers and excitement of a bullfight, a football game and a ride in an aeroplane.” From the opening punt, play generally devolved into a game of chicken. Stopping short and turning not being the early automobile’s strong suit, a lot of players were thrown from a car at 40 mph. Most of them even lived.

During the early Twenties, motor polo matches were commonplace in New York and Chicago; by the Thirties, growing concerns over costs and safety led to widespread abandonment of the sport.

Translation: For nearly a century, we’ve been robbed of our opportunity to play motor polo. That’s egregious, and The Drive won’t stand for it.

Bring back motor polo, we say. Bring it back with Eighties jalopies and modern equipment, a swarm of stripped Plymouth Reliants and Chevy Berettas, chariots for men of strength and valor. Gambling and drinking encouraged; once-per-period fisticuffs mandatory. Jock Jams Volume IV, and only Volume IV, on repeat from two-story-tall speakers. Pads? Leather, if at all. Hell, we’ll even host the first match, and spring for sawdust to address spilled fluids, automotive or otherwise. Who’s with us?