A smaller, lighter, and faster flat panel satellite antenna is on the way to usher in a new era of mobile Internet 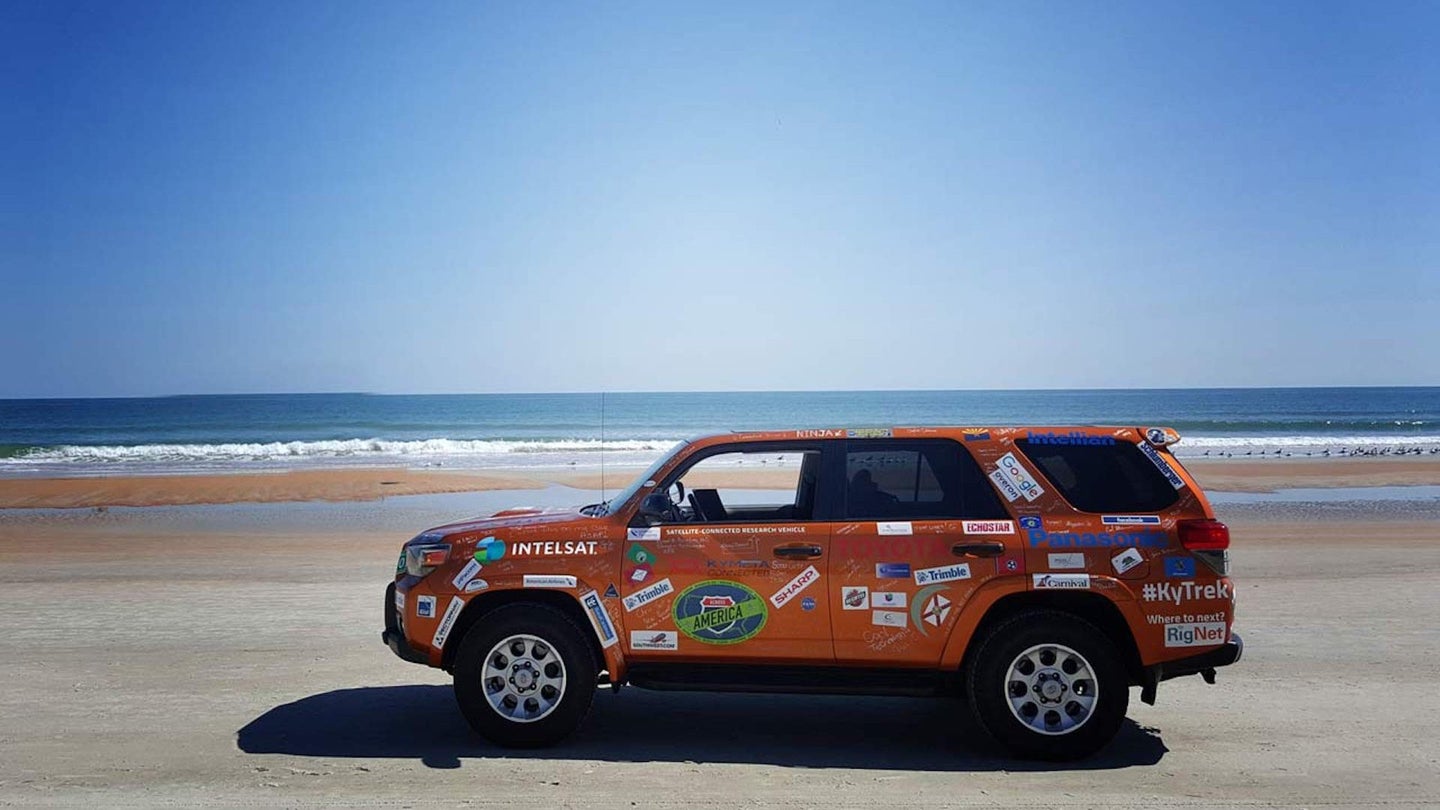 Satellite Internet in Cars Is One Step Closer to Reality, Kymeta

Kymeta is on a mission to making Internet access on moving vehicles fast, secure, reliable, and available on a global scale. Its revolutionary satellite antennas will soon deliver broadband satellite connectivity to large marine vessels and civilian armored vehicles; now, the company has proved this same technology can be scaled down to pipe data to millions of passenger cars.

The company has announced it successfully connected a scaled-down passenger vehicle version of its flat panel mTenna satellite antenna subsystem module (ASM) with a satellite 22,000 miles away.

Most satellite antennas are bulbous parabolic dishes that mechanically swivel to maintain a connection with a satellite. However, Kymeta sells a 70-centimeter flat panel antenna that has no moving parts and instead uses software-controlled beam bending and steering to track satellites in the sky. The mTenna will soon become  available in Q2 for large vehicles, such as yachts, or armored cars, but the next market Kymeta is targeting is the connected car.

To conform to the space limitations of passenger vehicles, Kymeta scaled the antenna's footprint down to 20 centimeters in diameter. But until today, there was no guarantee that a salad-plate sized flat antenna would work.

Tom Freeman, senior vice president of the Redmond-based start-up, said the test is a huge breakthrough for the company.

"To produce something that small and connect to something that is 36,000 kilometers away and get Skype, YouTube, and Netflix, that's a big deal. It brings the promise that we've been talking of space connection to cars into a real space," Freeman said in an interview with The Drive.

Kymeta set the antenna on a stand outside of a car, fired it up, and connected with a satellite in geosynchronous orbit tens of thousands of miles away. The researchers logged broadband speeds of up to 1 megabyte per second while downloading and 0.5 MB/sec while uploading.

Consumers can expect faster speeds when Kymeta's antennas are ultimately embedded in Toyota's production vehicles. By 2021, IntelSat's will have an operational constellation of hundreds of low-earth orbiting satellites that are 1,000 miles away or closer. Freeman couldn't speculate on how fast real-world Internet speeds would be by the time they reach mass production, which is still a few years away.

"It's a one-step at a time kind of a thing. This is not the moving test, not the test at speed, not the test in the mountain pass—those are all for a later date and later release," he explained. "This was just the 'Can we do this with the smallest electronically steered aperture ever created to connect to the Intelsat system,' and the answer is 'Yes, we can.'"

But in order to get it into production in automobiles, Kymeta stills need to make it quicker, lighter, and smaller, says Freeman.  The next step for the company is to put the mTenna through the paces of automotive testing, though Freeman couldn't say which tests would take place when.

Toyota invested $5 million in Kymeta in 2015, and announced its partnership with the start-up when it debuted the mTenna on its Mirai fuel cell vehicle concept at the 2016 North American International Auto Show.

“We are delighted to see that Kymeta continues to make progress since our partnership announcement last year. This test is another positive milestone achieved and an important step closer to the future reality of a secure, high bandwidth communications system with a global coverage area for connected cars,” said a spokesperson at Toyota Motor Corporation.

Production dates for the satellite Internet have not been announced.

Correction: a previous version of the article stated that the 70-centimeter mTenna is currently available. It is not, but will be released in Q2 of 2017.