Who knew a factory-built GT3 race car could become a potent drift machine? 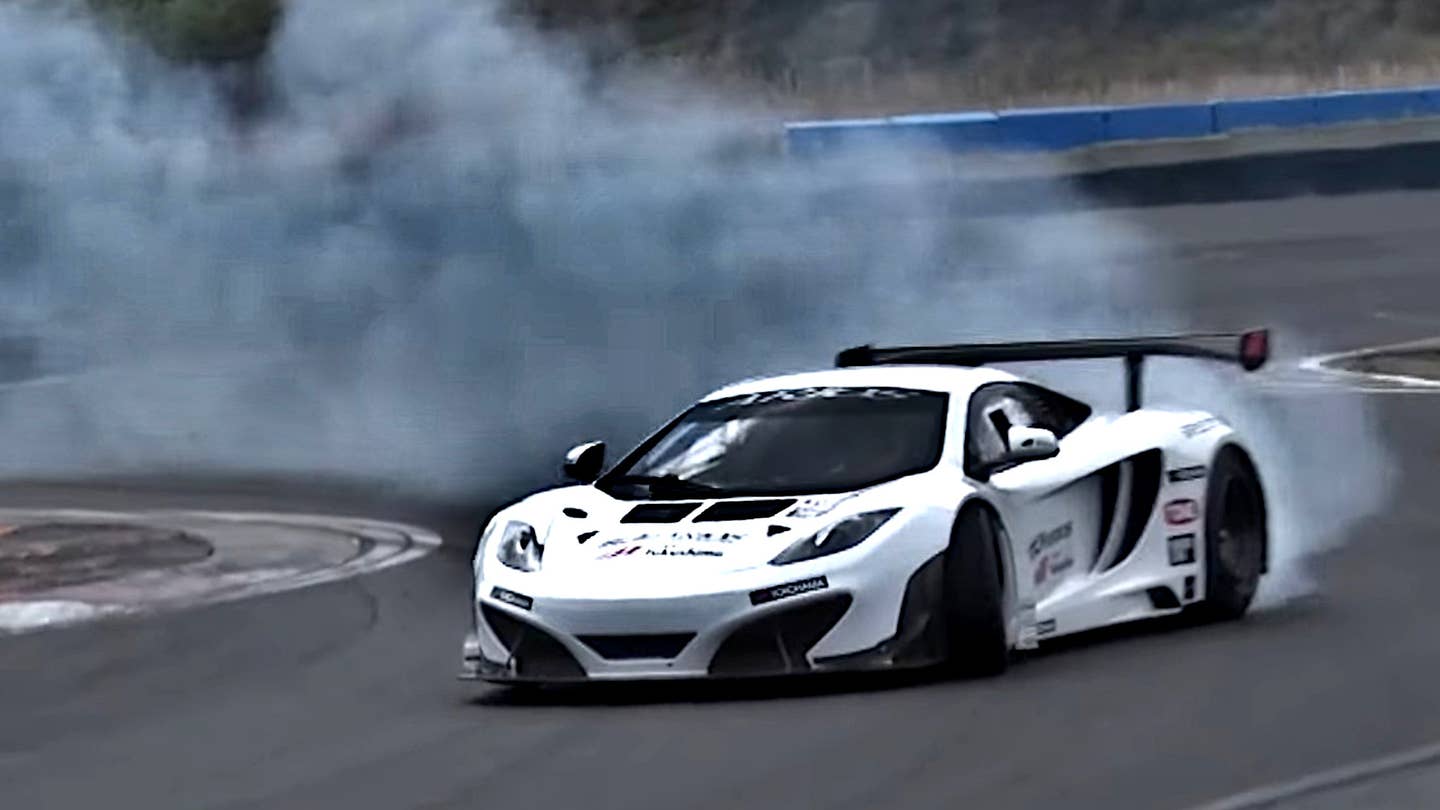 Just over a decade ago, McLaren burst back onto the supercar scene with the MP4-12C. This was quickly followed by a track-only version built to FIA Group GT3 specifications for global competition. Now, Japanese supercar rental house Arios has taken one of these rare vehicles and set it up as a dedicated drift car. Japanese outlet VIDEO OPTION went down to the track to see the racing McLaren lay down some lurid drifts.

Racing regulations are very tight these days, precluding the vast majority of street vehicles from competing without heavy modification. For this reason, supercar manufacturers like McLaren often build dedicated race versions of their cars to suit competition regulations. The MP4-12C GT3 is one such vehicle, with McLaren building around 40 examples up to 2013.

As delivered to Arios, the car was very much in race-ready spec. Centerlock wheels, polycarbonate windows, and the huge GT3 wing and diffuser all indicate the car's original purpose. Other mods McLaren made include airjacks, and a restrictor required by GT3 rules that drops power down to 493 hp from the original car's 592 hp. Inside, there's the expected rollcage and harnesses, along with a yoke-type racing steering wheel covered in buttons and rotary switches for controlling the vehicle's many functions.

Costing around 45-50 million yen ($345,000-384,000 USD), the car needed a few mods to prepare it for drift duty. Drift legend Daigo Saito had a hand in the project, posting photos to Instagram showing the mods made to increase the steering angle. This helps the driver steer the car at large drift angles, and aids in recovery from even very deep slides. The yoke steering wheel was also modified to have a complete, rounder profile. This allows the driver to keep their hands on the wheel even at large steering angles.

Keen-eyed drifters will also notice the giant handle for the hydraulic handbrake in the cabin. Having a powerful handbrake to lock the rear wheels is a key feature that aids in initiating drifts. Impressively, it appears the stock GT3-spec suspension is still in place, being plenty adjustable enough for drift duty.

The McLaren drifts better than you might expect. Mid-engined cars aren't a common sight on the drift circuit, but they can perform well if tuned and driven appropriately. Behind the wheel, Hirokazu Suzuki manages to lay plenty of white smoke as he executes smooth transitions in the former race car.

The build isn't perfect just yet. The paddle shifters for the GT3's unique six-speed sequential box are not in the ideal spot for drifting, particularly at large steering angles. A regular hand-actuated shifter in the center console would solve this issue. The clutch is also a race-spec unit that is really only used for taking off from the line in the car's original GT3 role. Suzuki hopes to change this to a more appropriate unit for drifting in the future.

Overall, though, it goes to show that a factory-built racing supercar can actually become a drift weapon without a huge amount of work. They're already stripped out, full of safety gear, and generally have highly-tunable suspension out of the box. One only need get a little creative with setup and mods to turn such a vehicle into a usable drift car.

The Secret to Formula Drift Is Smoothness and Finesse, Not Violence

From the outside, the cars of Formula Drift are violent, loud, and fast. From the inside, the experience is a different story.