Global Warming Is Once Again Ruining Our Winter Racing Plans

Ice racing and other snowy car events are getting pushed back. 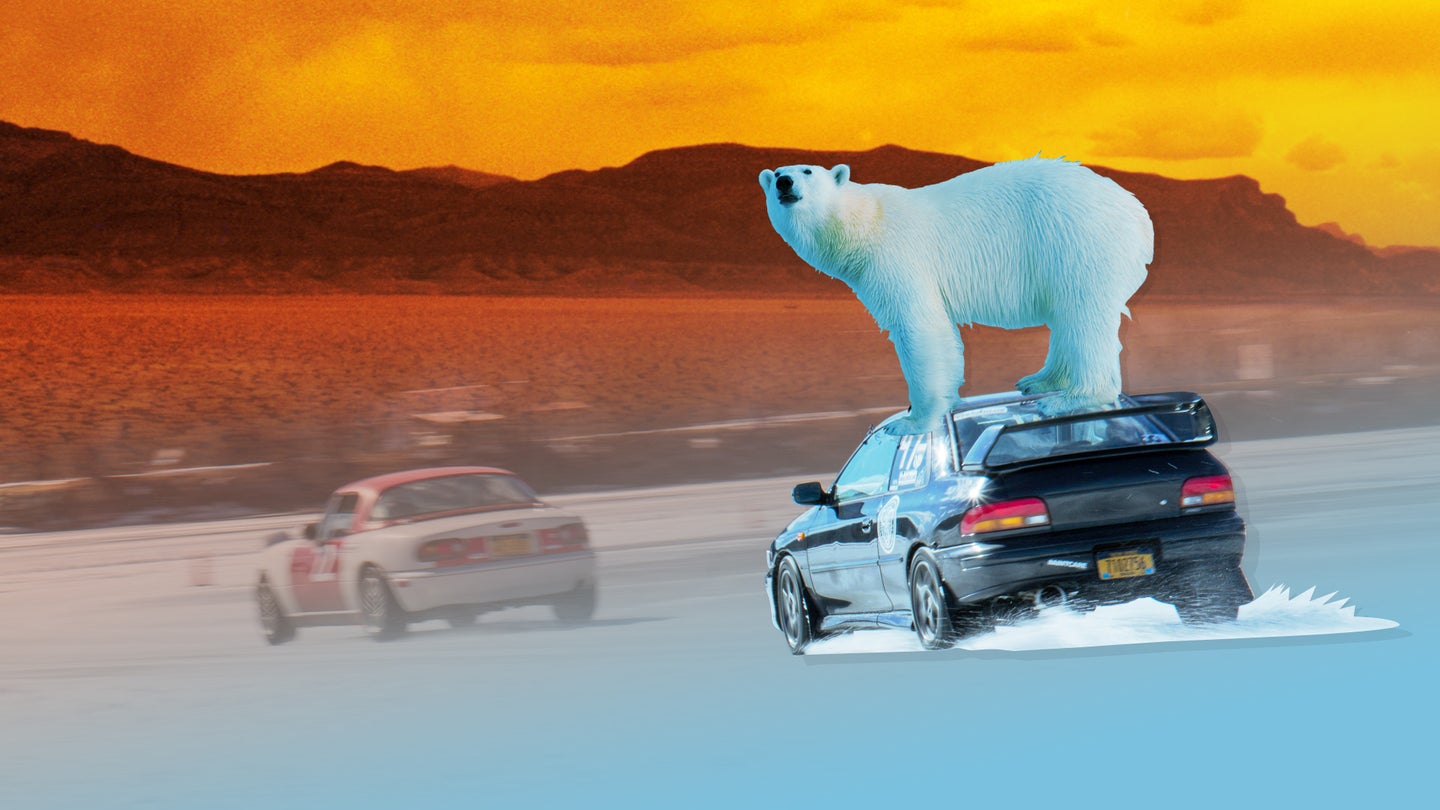 Warm weather has again forced ice race organizers to cancel and postpone winter driving events in an effort to prevent a field of Subaru WRX STIs, Mitsubishi Evos, and beater Audis from ending up at the bottom of the frigid upstate New York lakes where they race.

For many, winter is the motorsports off-season. But this is when ice racers dedicate their time to racing their winter tire-equipped cars on frozen lakes and snow-packed courses at various events in the northeast of the United States. In recent years, the number of those events has steadily declined because of unseasonably warm weather. This year is no different.

Lime Rock Park, a full racing facility with a 1.5-mile track and a detached autocross course, offers snow driver education programs for newer drivers and winter autocross days for enthusiasts to get their car sideways on weekends. Because of warmer temperatures and unusual amounts of rain, the track has had to cancel and postpone a handful of these events.

“We had to reschedule a whole number of programs," said Lime Rock Park Spokesperson Rick Roso in an interview with The Drive. “Lack of cold temperatures during the day have probably taken some money out of our pockets.”

Unlike some other groups that offer winter driving events, Lime Rock uses specialized equipment to help push Mother Nature toward a snow day. But even that stuff hasn't been of much help this year.

“We committed to getting snow guns and grooming equipment and expertise because we wanted to do winter driving programs much closer to New York City and Boston without having to go way up north or out to Colorado," he said. "The first couple of years were great, but it's the lack of cold temperature, not snow."

In January, the New York Times reported that the Earth set a new high-temperature record for 2016. It's unclear if that global warming trend has been what's caused the hotter temperatures that have affected the winter driving events.

Organizers of the Adirondack Motor Enthusiasts Club—a group of car folk who have been organizing ice races since 1964—look to the winter as the prime time for hosting their wheel-to-wheel races on the frozen lakes of New York's Capital region. The club generally aims to hold at least eight events each season but already this year had to cancel one event and end another early—just last weekend–because of poor lake conditions caused primarily by warm weather.

“After the first set of heats Saturday, we had to call it quits," said AMEC coordinator Michael Waterhouse in an interview with The Drive. "The ice started to sink a little bit more. The slush and water kinda ate away at the surface a bit and made it really rough. Probably some of the roughest conditions we’ve had."

AMEC race organizers were relieved that most of the competitors, majority of whom traveled more than two hours to get to the race, were understanding about why the event had to be shuttered early.

“[We] thought people would be real upset about it, but I think everyone kind of understands that’s part of the sport,” said Waterhouse.

Though this year's conditions are less than optimal, ice racers with the Sports Car Club of Vermont remember 2016's season when things were even worse.

"Last year we didn’t have a time trial because there was no consistent ice," said Jeremy Haas, a coordinator of ice races for the SCCV. "There was a lot of going around and there was just nothing good enough to have an event on."

For 2017, SCCV has found a new, much more promising lake to hold its frozen water time trial competitions on.

"Luckily this year, we have a new venue that we've checked out. It's Lake Elmore. It's a really shallow lake so it froze really thick really quickly this year. That's where we're going to be having our events for the foreseeable future," said Haas.

SCCV requires at least 12 inches of ice before it will invite its members and the public to come play around on the frozen lakes. Though there are three other bodies of water that the organizers check ice levels on, at the moment, Lake Elmore is the only acceptable venue.

"I'm very excited. I’ve already been out twice on just a couple weekends just doing a feeler for the ice and the locals...It’s a whole different type of snow excitement.

As of the time of this writing, AMEC is planning to race at Lake Algonquin on Feb. 5th and Lime Rock Park has a snow autocross slated for Feb. 4th. Luckily for the ice racers and snow driving enthusiasts, it's looking like the weather might be just about perfect.