The massive bridge cuts down travel time by hours compared to the traditional ferry crossing across the Dardanelles Strait. 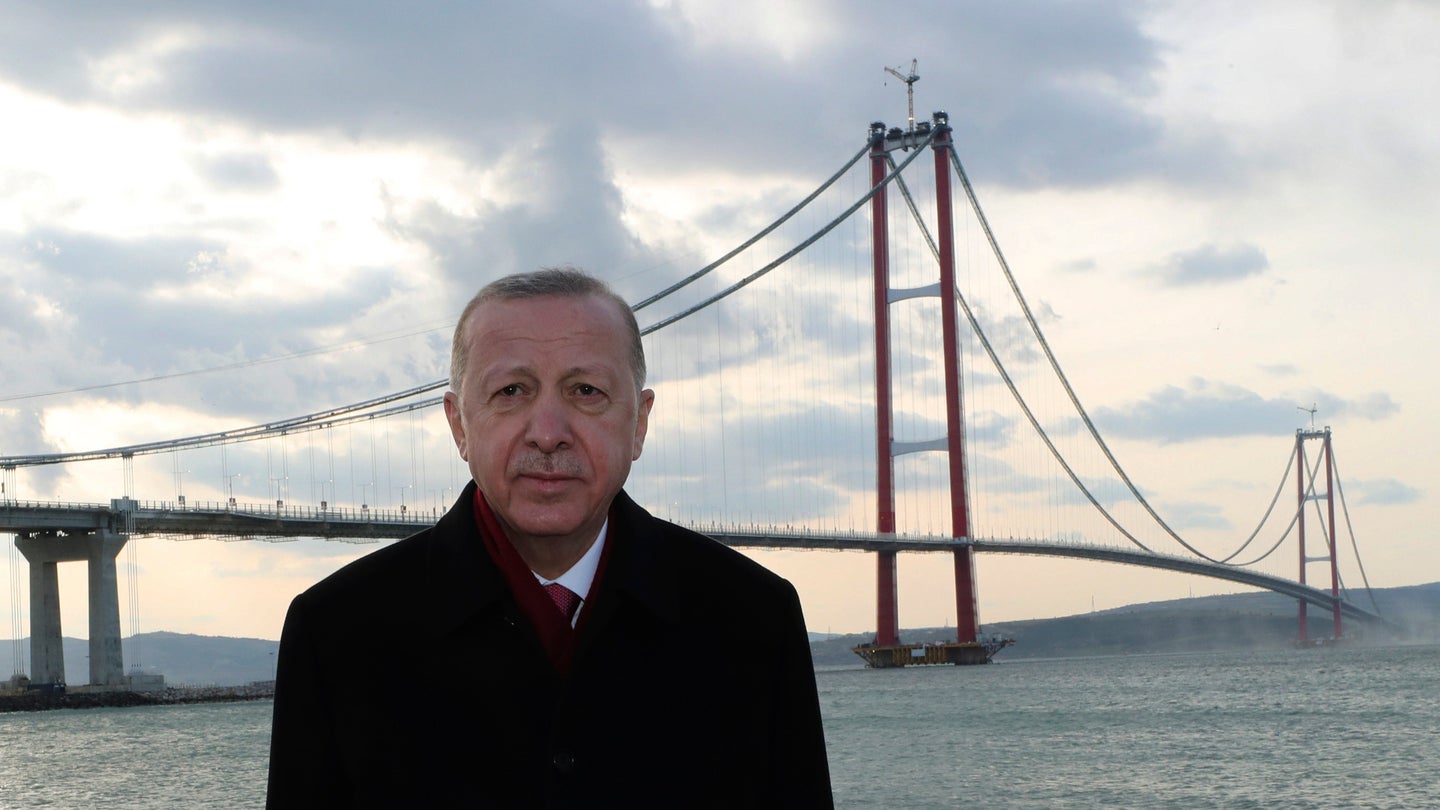 After just under five years of construction, Friday saw the opening of the new 1915 Canakkale Bridge, permanently linking both sides of the Dardanelles Strait for the first time. Turkey's president Recep Tayyip Erdoğan was there to inaugurate the bridge, joined by South Korean Prime Minister Kim Boo-kyum, as reported by AP News.

The newly completed crossing is now the world's longest suspension bridge, with the main span measuring 6,637 ft long. It narrowly beats out the former record holder, Japan's Akashi Kaikyo Bridge, by just 105 feet. Construction of the bridge was undertaken by a consortium consisting of Turkish and South Korean companies, with the project serving to strengthen the bonds between the two countries, said Boo-kyum.

Where crossing the Dardanelles Strait used to take around 90 minutes via ferry, the journey can now be completed over the bridge in just 6 minutes. It's a part of the broader Kınalı-Tekirdağ-Çanakkale-Balıkesir Motorway, or O-6, and serves as the country's first motorway link between Europe and Asia outside of Istanbul, which has multiple bridges and tunnels linking the two continents.

Building the span cost €2.5 billion euroes, or roughly $2.7 billion USD. However, expected savings in fuel consumption from the more efficient crossing are estimated to be €415 million euros, or $458 million a year, according to Erdoğan.

Crossing the bridge will incur a toll of 200 Turkish lira, or roughly $13.60. For that price, not only do drivers get a much faster transit between Europen and Asian parts of Turkey, but they'll also be treated to a stunning view of the waters of the Dardanelles strait.

The design of the bridge is rich in symbolism, though you'd have to look at the blueprints to truly appreciate it. The main span of 6,637 feet, or 2023 meters, was chosen to celebrate the year 2023 in which Turkey celebrates the centenary of its founding after the dissolution of the Ottoman Empire. Meanwhile, the bridge's towers stand 318 meters high, denoting the date of March 18 upon which Turkey honors those lost in land and sea battles in Gallipoli in World War I.  The bridge's name itself references the Ottoman's naval victory on that same day in 1915 over British forces, a key battle in the war.

The bridge should serve as a welcome time-saver for all those who find themselves transiting the cities and towns of western Turkey. As for the dreamers out there hoping to claim the title of world's longest suspension bridge for themselves, they'll now have to try just a little bit harder.

Biker Nearly Flies Off Raised Drawbridge After Smashing Through Gate

Life is not 2 Fast 2 Furious, and you cannot jump drawbridges at will.