It goes to show what you can achieve with a little ingenuity. 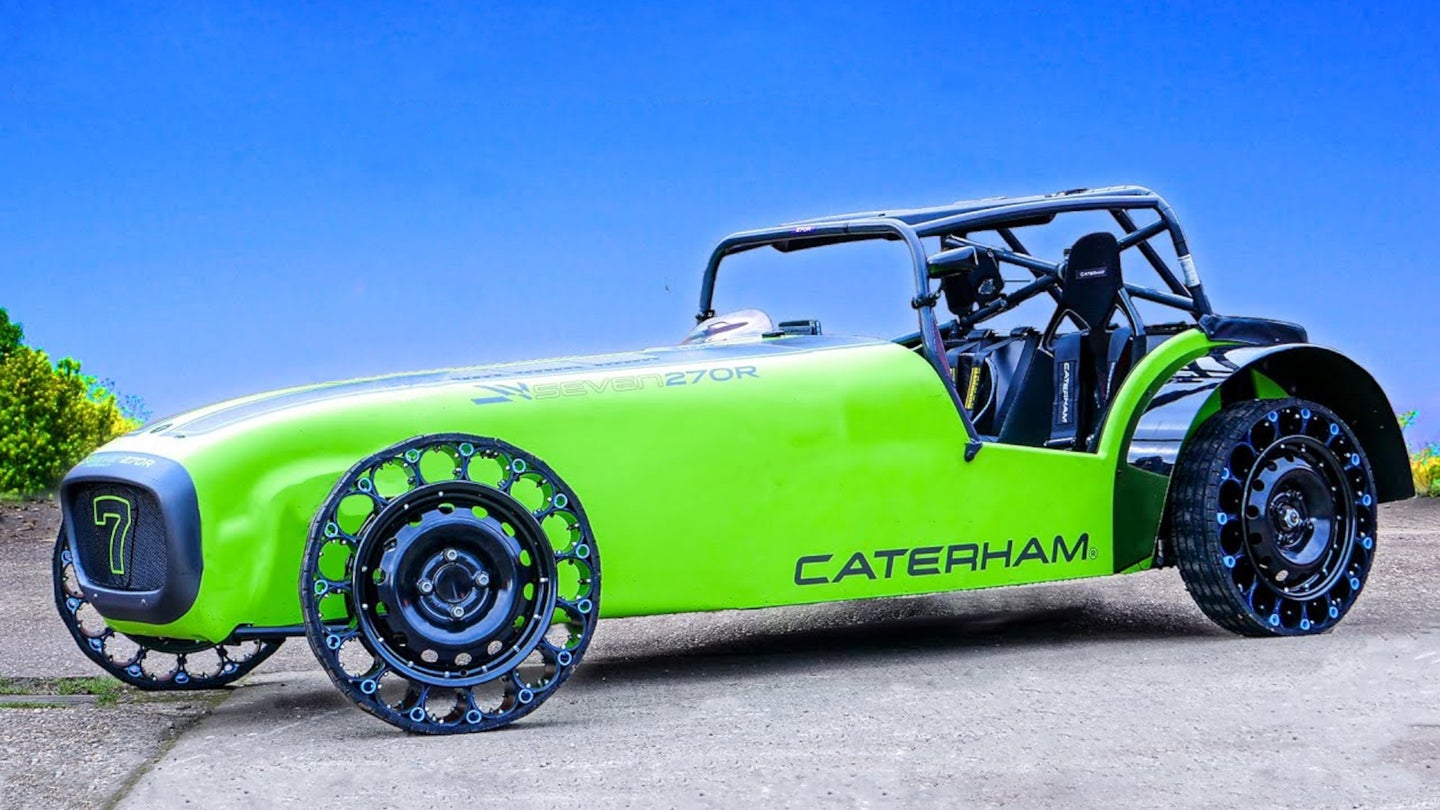 Tire manufacturers have been working on designs for "airless" tires for years now. While some products are on the market for small off-road applications, others remain as internal prototypes only. While the rest of us wait for the technology to hit the mainstream, YouTube channel Driven Media set out on building their own airless tires and put them to the test, as covered by Motor1.

Airless tire concepts typically involve replacing the air cushion of a pneumatic tire with plastic or composite structures to support the weight of the vehicle instead. Producing an airless tire with comparable performance and longevity to conventional designs has proven difficult. The concept remains an area of active research for many companies as the technology could produce tires with better lateral stiffness and no risk of puncture.

While companies are pouring R&D funding into the technology, the airless tires built by Driven Media are decidedly low tech. They consist of a set of 14" steel rims off a Ford Mondeo, fitted with sections of plastic downpipe bolted around the periphery, with a tread cut from a conventional tire wrapped around the outside. Gaps between the downpipe sections are supplemented with smaller-diameter pipe sections with the aim of approximating a round wheel, though the end result is visibly lumpy. Over 300 nuts and bolts are used to hold the airless tires together.

For testing, a Caterham Seven 270R was pressed into service. Weighing only around 1200 lbs unloaded, it's the ideal platform for testing the homebrew design without overstressing things.

Despite being cobbled together out of parts sourced from the local hardware store, the design actually works. In driving on the test track and regular roads, the wheels hold together, only throwing off a few nuts and bolts here and there. They even survive speed bumps and a pothole strike at speed, and the team even manage to throw up some tire smoke doing burnouts on the track.

As for a bed of nails left sitting in the road? Naturally, the airless tires can drive over it, no problem!

Admittedly, they're not the roundest wheels, with significant vibration at even low speeds. Road noise is almost twice as loud compared to the Caterham's standard tires. Some thread locker would have likely gone a long way to stopping the wheels from throwing off parts, too. With a big obvious seam in the tread, and component parts designed for carrying water, not dynamic loads, it's unlikely they'd last thousands of miles, either.

Regardless, it goes to show that airless tires don't have to be a big expensive corporate research project; you can easily build your own at home! Really, though, it would be one glorious spectacle to see these bolted up to a full-weight hatchback to watch the carnage unfold when they rapidly disassemble at 60 mph. Make sure to have a slow-motion camera on hand for that one.

If airless tires handle this well, maybe they’re more than a novelty.

Airless tires are the holy grail for tire and auto manufacturers due to improved safety and reduced environmental waste.