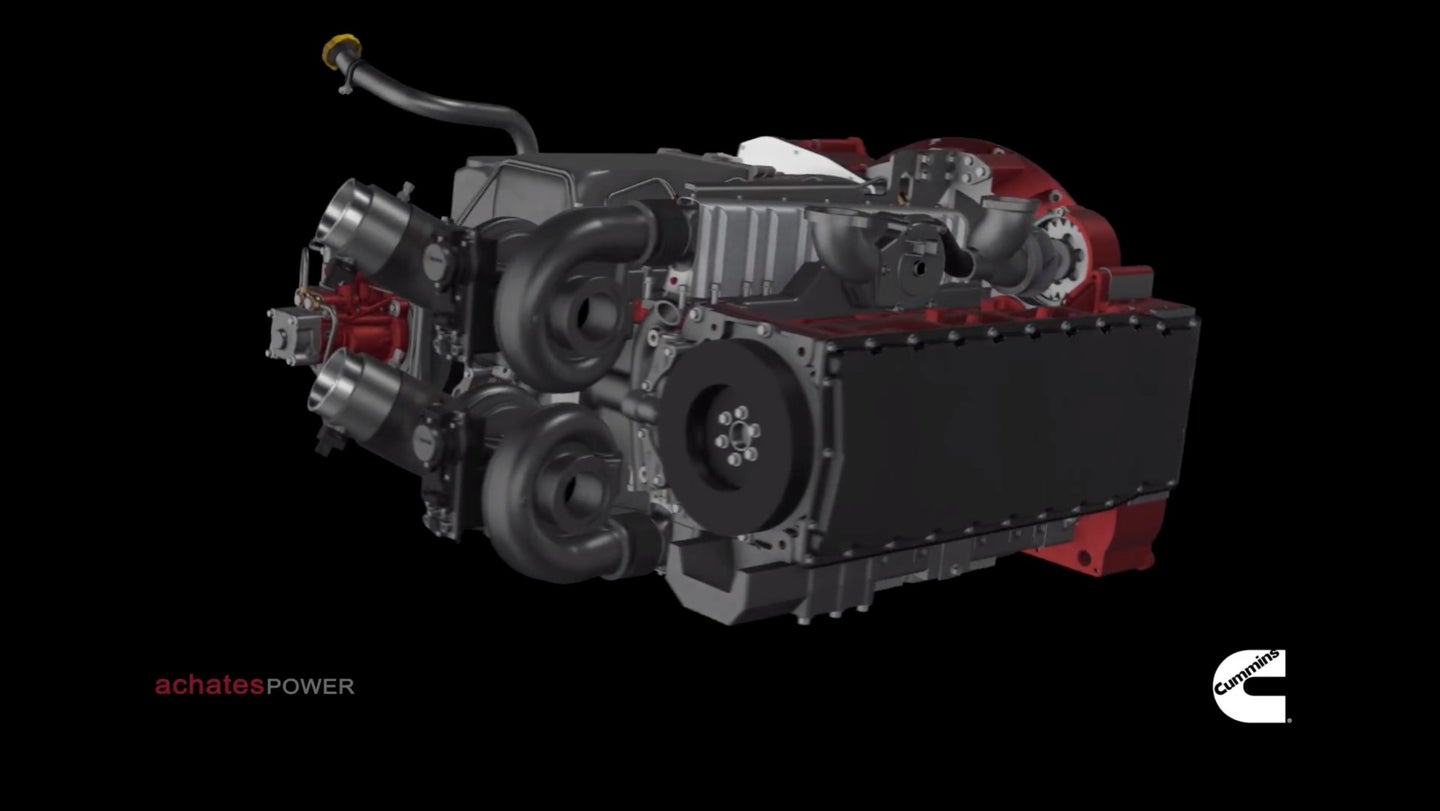 Automotive-related defense technology is far removed from what we see in our daily drivers, and it's pure brain candy for engineering nerds. Whether it's a small-but-capable cargo delivery vehicle or a mountainous earth mover used by our armed forces, there are some nutty innovations that, from this side of it all, seem otherworldly. Cummins' Advanced Combat Engine, for example, touts an oddball flat-four design along with super- and twin-turbocharging to produce 1,000 horsepower—but that's just the start.

The 14.3-liter power plant is diesel-fueled and uses two-cycle operation rather than the more traditional four-cycle. As such, it must have air forced into the combustion chamber to complete a power stroke. That's where the roots-style "supercharger" comes into play, running on a set of gears and feeding the engine with oxygen. It's similar to old Detroit Diesels, though the layout isn't inline or in a "V"—the cylinders are opposed.

Cummins' ACE has just four cylinders, but eight pistons. Each side has its own crankshaft and the pistons face each other, building enough compression as they meet to complete a power stroke. Also, there's no valvetrain. Instead, as the pistons move between top dead center (TDC) and bottom dead center (BDC) they uncover holes in the combustion chamber that allow air in and out.

Old-timers and those that are in-the-know might remember the Commer "Knocker" engines, of which the ACE is reminiscent. It's just that the Cummins unit has roughly ten times the power. That's largely due to a pair of Holset HE500 variable geometry turbos. And while 1,000 horsepower might not sound like much for an engine with nearly 873 cubic inches of displacement, it delivers peak power at 2,600 rpm. This aids in longevity, which is always key for military applications.

Cummins and its partner Achates designed the ACE to fit inside the cramped engine compartment of tanks like the M88. That's partially why they went with an opposed-piston configuration; the rest boils down to heat and efficiency. It's said to reduce fuel usage by 13 percent while upping power density by 50 percent over its more ordinary counterparts. What's more, the power plant's design inherently lends itself to reduced heat rejection. Cummins was tasked with taking that figure down by 21 percent when it was awarded the $47.4 million governmental contract, and by doing so, it has created an engine that puts off a low heat signature, making it even more difficult for enemies to track.

Jason Fenske of Engineering Explained gives a pretty comprehensive run-through here, and the video is worth a watch:

A larger, six-cylinder ACE21.5 has also been tossed around, along with a three-cylinder lump measuring 10.6 liters. Cummins makes the point that the ACE design is completely modular and can be built accordingly for different applications. It's possible that these engines could also find their way into Class 8 line-haul machines, though the project has mainly focused on tanks since the contract was signed in 2017.