Stanford’s New Drone Can Land on Walls and Ceilings

It’s only slightly less creepy than the drone that can land on walls and walk up them. 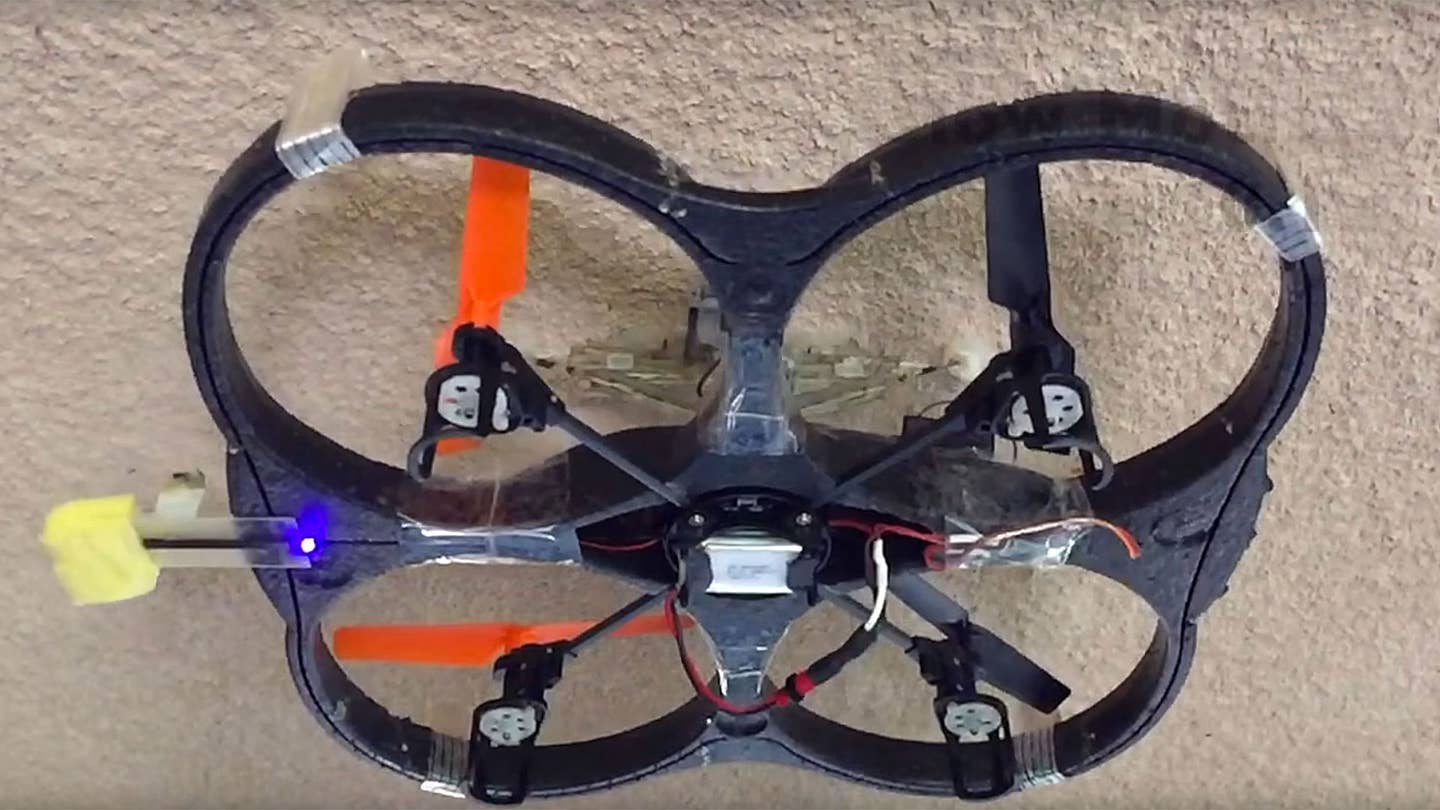 Engineers at Stanford University’s Biomimetics and Dexterous Manipulation Laboratory continue to plot our sci-fi future. The lab’s latest creation? A drone that can perch on vertical surfaces and ceilings. On top of a quadrotor, Stanford's tech boffins placed a pair of feet and an attachment that controls microspines for gripping – the microspines are tiny, opposing hooks that clamp onto minute surface irregularities the same way a spider’s or insect’s legs would. The front of the quadrotor is equipped with a tail loaded up with microspines (yes, the feet are on top and the tail is in front). To perch, once the drone’s tail impacts the wall surface the drone tilts up and its feet hit the wall. The drone first sticks to the wall aerodynamically due to the force of the spinning rotors, but in less than a second the microspines clamp down on the wall surface and the drone hangs mechanically. To take off, the main microspines release, and as the drone tilts backward the microspines in the tail grip the wall to ensure the drone reorients itself horizontally. That’s when the fans take over and it’s up, up, and away.

Landing on the ceiling is even easier – all the quadrotor has to do is fly straight up, the feet hit the surface and the spines lock in. Taking off is as simple as letting go and falling off the ceiling. The enabling technology adds only a few grams to the weight of a quadrotor and is made of off-the-shelf materials.

Stanford’s been working on ways to do this for more than 12 years – the university published a paper on climbing walls with microspines in 2004. In 2009 the lab wrote about a landing system modeled on the human leg that made it possible for fixed-wing unmanned vehicles to land on walls, which looks as bizarre as it sounds. Earlier this year Stanford showed off SCAMP, the Stanford Climbing and Aerial Maneuvering Platform that can land on walls and then climb them with the help of two legs tipped with microspines. Using just its onboard computers and sensors, SCAMP can fly, perch, climb, recover from failure, and take off without human input. The creators called it “a robot that's part woodpecker, part Daddy long-legs, and part hummingbird.”

The newest quadrotor drone is an evolution of SCAMP, but sheds the ability to walk in exchange for utilizing a more robust platform. The main benefit of perching is to extend battery life and, therefore, the active mission window; a drone hanging on a wall can gather data over a far longer period than one forced to stay airborne. Potential areas of application include disaster zones to observe or act as nodes for a communication network, in jungles for animal observation, and of course, battlefields and spying. Perching is also handy to get a drone out of adverse flying conditions. In the SCAMP’s case, useful battery life thanks to passive operation jumped from three minutes to two hours.

Fine tuning remains – such as increasing the chances of a good landing and broadening the range of surfaces a drone can reliably perch on. Once they get that done, we expect it won’t be long before one of our hoariest clichés morphs into, “I would love to have been a drone on the wall in that room…”