We can rebuild him; we have the technology. 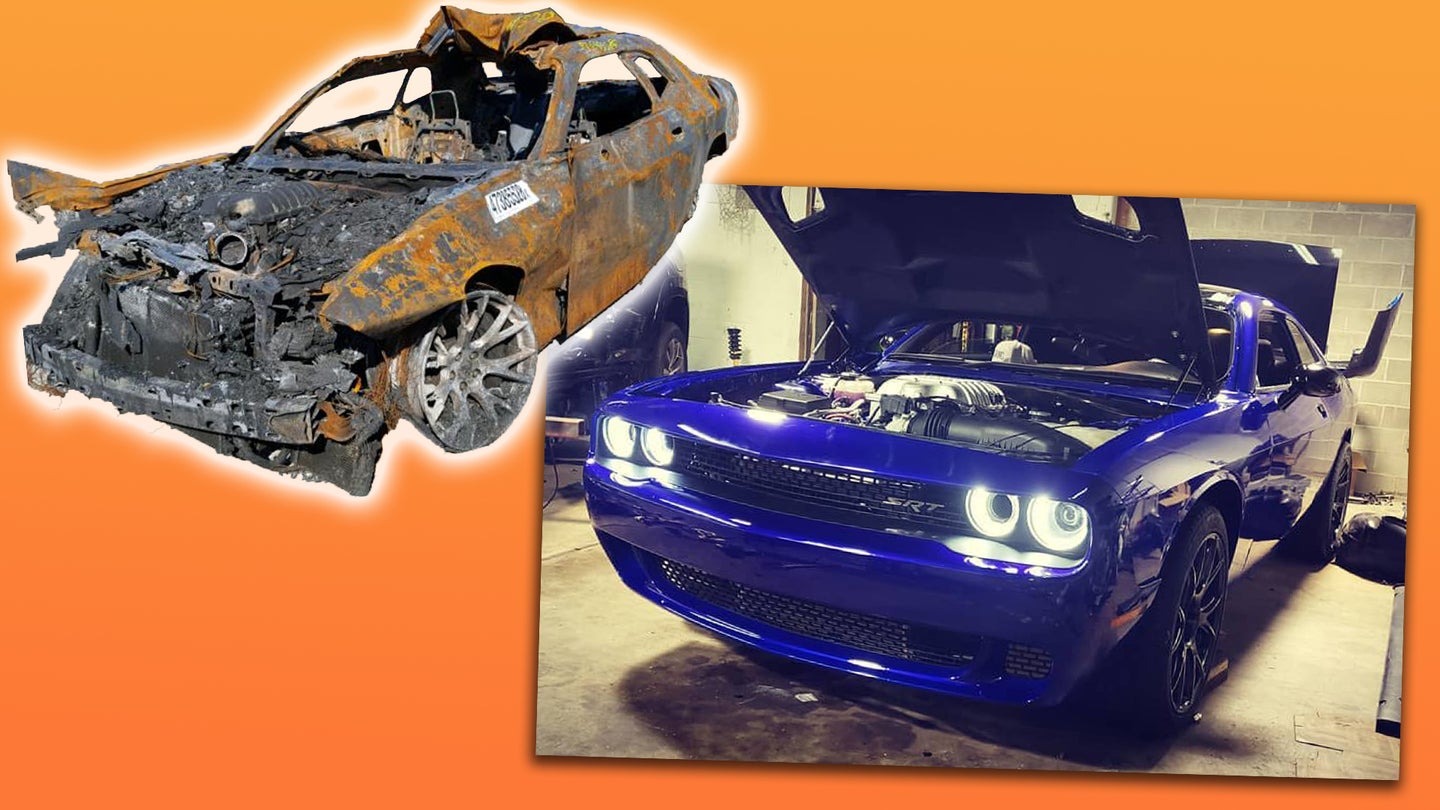 Typically, the monumental task of pulling a car back from oblivion is reserved for something irreplaceable, a vintage auto of historical significance. An incinerated 2016 Dodge Challenger Hellcat is neither, making it both remarkable and a little confusing to watch one undergo a complete restoration—hell, let's call it a reconstruction—in this impressive timelapse video from the YouTube channel DIYGang.

The project began roughly 10 months ago when host Jose spotted the Challenger Hellcat at a Copart salvage auction and saw the potential to take car YouTube's growing trend of rescuing salvage vehicles to an extreme end. This wasn't your typical accident victim with a damaged body and plenty of workable parts; instead, it had been torched in a barn fire and partly crushed by a fire department excavator combing the wreckage. It was entirely destroyed.

But where any rational person saw charred scrap metal, Jose saw pure, shining potential. The scope of the project took shape as the car did the opposite, the extensive thermal damage requiring Jose to remove every single exterior panel and mechanical component to make significant cuts to the unibody chassis. What remained was essentially the lower half of the Challenger's frame, which was media blasted, primed, painted, and welded back together with usable segments from a second salvage Challenger.

That kind of deep surgery on a heat-damaged car might be a deal-breaker to some, but we're not the ones driving it, so all we can say is this is America and Jose can do as he pleases. For what it's worth, his welds look decent. The rest of the body was rebuilt with a mix of new and refurbished panels before being painted a unique shade of blurple.

Running gear and engine were next on the docket. The motor was plucked from the ashy engine bay and taken apart before being sent over to a company called ECS Performance to be built with forged internals. It was eventually reinstalled along with a brand new interior, at which point the Challenger Hellcat was ready for its maiden voyage. Again, no matter your opinion on the vloggy style of the 50-plus videos documenting the project or the practicality of the whole premise, it's quite impressive to watch Jose piece together every single complex system that goes into a modern car.

It's revealed that the restoration cost a total of $35,492.16, but could have been wrapped up for substantially cheaper if it wasn't for the small details. For example, the motor cost $5,449 to build, although an extra $3,000 was spent on the transmission. Additionally, opting for fancier paint added a cool $1,000 in materials alone. It's silly expensive for a weekend project car, but it's still around $10,000 cheaper than a used, non-salvage title Dodge Challenger Hellcat. Jose notes that if anyone was rebuilding a similar car without sponsorship, it absolutely wouldn't be worth it.