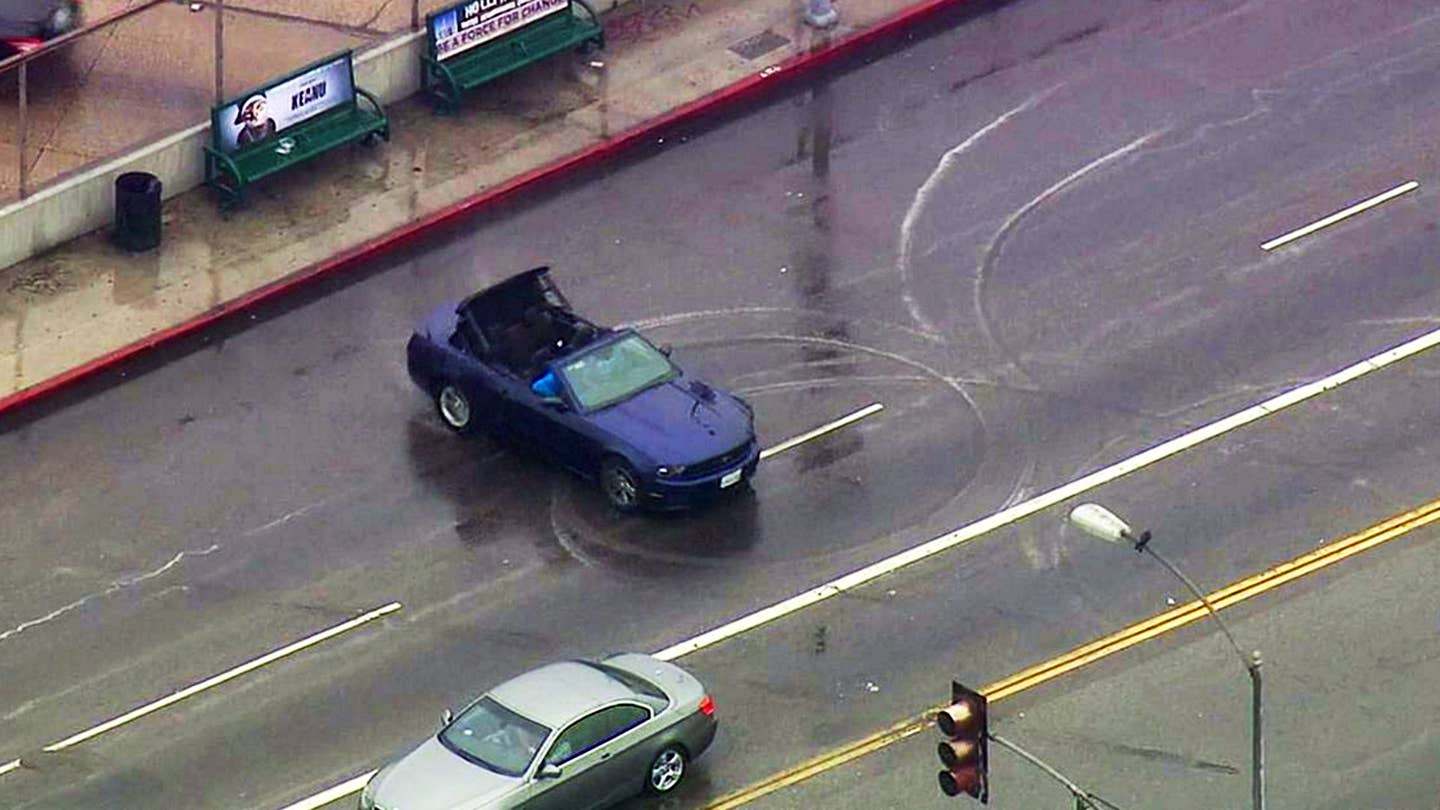 A pair of burglary suspects driving a blue drop-top Ford Mustang led Los Angeles police on a lengthy chase on April 7, one that—as much as The Drive hates to use the word—genuinely deserves to be described as EPIC. Over the course of almost two hours, the suspected crooks showed off for the tourists on Hollywood Boulevard, blasted up Mulholland Drive, and even posed for photographs with fans...all while fleeing from the cops.

The chaos kicked off around 1:30pm local time, according to KTLA, when police responded to a home burglary call in the Cerritos neighborhood south of downtown Los Angeles. Police chased the suspects, who were driving what appeared to be a late-fifth-generation Ford Mustang V6 convertible, north along the 110 and 101 Freeways to Hollywood. In spite of the rain, the suspected crooks decided to pop the top.

There, the bandits pulled onto Hollywood Boulevard, where they whipped off a few donuts with the top halfway down. As ones traditionally does, mid-chase.

They slowed down to pose for the assembled masses in front of Grauman's Chinese Theatre, then headed for the Hollywood Hills—but not before flashing the peace sign at a well-placed KTLA photographer.

A police spike strip took out the right front tire, but the Mustang Bandits didn't let that slow them down—they came back down to Hollywood, where they once again showed off for rubberneckers and sidewalk-gawkers.

The duo then climbed back onto the 101, heading south. On the highway, the chase reached maximum Los Angeles-ness when the escaping Ford was briefly pinned in by a TMZ tour bus.

But the Mustang escaped, winding its way into South L.A., where the Ford climbed off the freeway and began cruising along surface streets. The duo eventually parked by 51st Street and Central Avenue, near where the driver and passenger reportedly live; they climbed out and began posing for pictures with the rapidly-assembling crowd.

Police arrived shortly thereafter, at which point the driver and passenger both surrendered without incident. KTLA reported that the driver, in fact, approached the officers with his hands behind his back before they even reached him.

Meanwhile, somewhere out there, Ken Block is likely desperately hoping no one realizes he kind of inspired the whole chase with Gymkhana Seven.