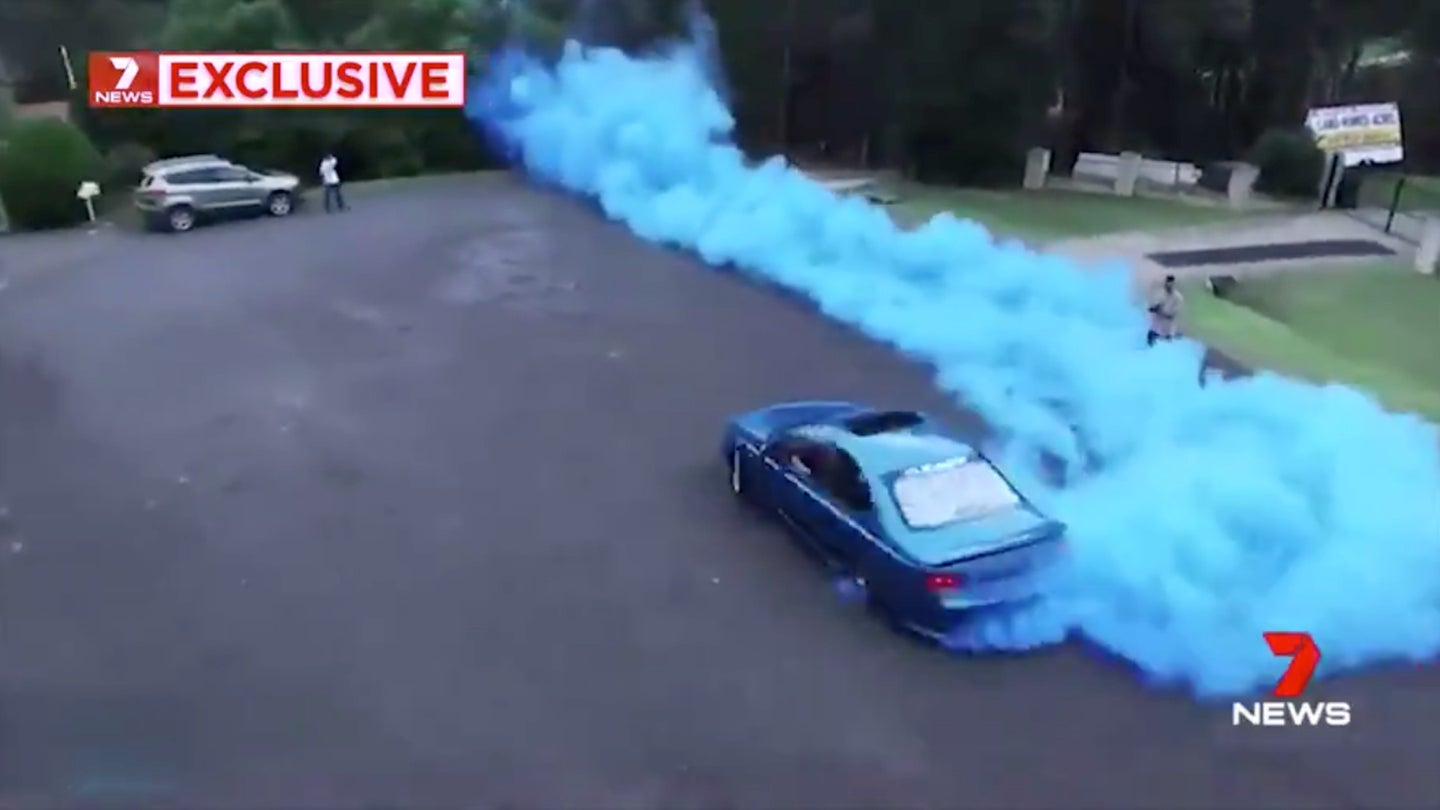 A soon-to-be father reportedly had his Ford Falcon impounded after doing a "gender reveal" burnout in his neighborhood in Sidney, Australia, much to the displeasure of his neighbors and the local police department.

Gender reveal parties aren't anything new, really, but in recent years they've morphed into massive ordeals thanks to social media. Typically, parents get an ultrasound and share the results with family or friends, sharing blue or pink paraphernalia meant to represent the child's gender—blue for male, pink for female. They're as silly as they sound, and given that Parents reports that ultrasound predictions of a baby's sex are inaccurate about two percent of the time, they're sometimes bound to be embarrassingly wrong.

That didn't stop one expectant couple from planning a gender reveal party, of which the focal point was a giant, raucous burnout using tires that generate blue smoke. Before the event, the couple distributed notices of its plans to neighbors through their mailboxes, reports The West Australian, though at least one household either ignored or didn't read the note, and when the burnout occurred, it filmed the event for social media—where law enforcement eventually discovered it.

Police paid the expecting couple a visit, and they didn't come empty-handed, although it wasn't exactly gifts that they brought. They brought along a flatbed truck, which they used to tow the Ford Falcon used for the burnout away to an impound. According to News.com.au, police charged four family members—including the child's grandmother-to-be—with crimes, for which they have a court date set. The driver was reportedly issued two charges of "aggravated burnout."

Law enforcement officials went on record to complain about the event's alleged dangers, insisting that the cameraman on the ground was at risk, seemingly forgetting that cars make noise and that people can tell louder means closer. Likewise, they claimed that onlookers behind a fence approximately 25 feet from the road were in danger, despite burnouts traditionally being performed either stationary or at low speeds.

"He was invisible [with] the amount of smoke that was generated from the screeching of the tires," said Chief Inspector Stephen Blair of the Traffic & Highway Patrol Command.

If you do decide you need to tell the world what your child's sex will be via a cloud of smoke, be sure you're cleared by your neighbors, and also fix your car up to snuff so it won't puke up its differential when you do so.

You’ve never seen drifting until you’ve seen it through the 4K eye of an aerobatic drone.

Good news (for some), only variables that can influence your car insurance premiums are age and driving record.

Nothing says “holiday spirit” like strapping a lit Christmas tree to the top of a van doing a wonderfully smoky third gear burnout.