Bright paint, big decals, and horsepower to spare can appeal to the six-year-old in all of us. 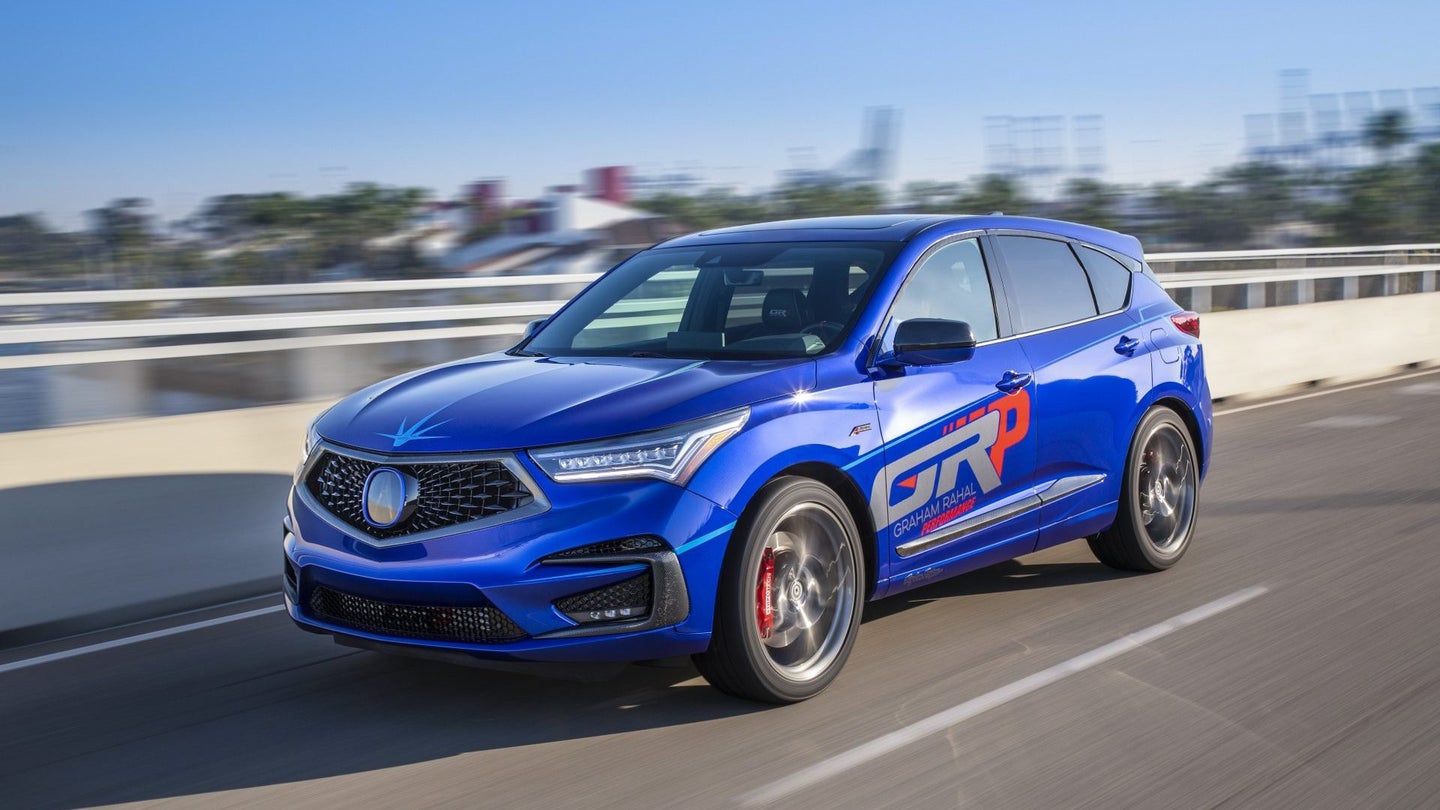 Acura celebrated the start of SEMA 2018 on Tuesday by whipping the cover off an RDX A-Spec performance crossover, which it lent to Graham Rahal Performance for a round of growth hormone injections.

GRP translated its experience tuning the Honda Civic Type R's 2.0-liter turbo-four into the RDX A-Spec's similar power plant, which comes from the factory with 272 horsepower and 280 pound-feet of torque. The modified GRP A-Spec breathes in through a new turbo, which crams charge air through a PRL Racing intercooler and down a faster-flowing intake manifold for combustion. After the bang cycle, the exhaust gases gush back out through the turbo, a custom downpipe, and a GRP cat-back exhaust.

KTuning reprogrammed the RDX's ECU to account for these changes, allowing the crossover to slap down an estimated 345 horsepower and 370 pound-feet of torque through the RDX's 10-speed automatic and torque-vectoring SH-AWD all-wheel-drive system. The SH-AWD, custom Eibach coilovers (that lower the vehicle by two inches), 21-inch HRE alloy wheels, and 265/40 Michelin Pilot Sport 4S tires adhere the RDX A-Spec to the road in all conditions. When it's time to cancel the party, six-piston StopTech brake calipers can put a kibosh on the vehicle's momentum.

"As owners of an Acura dealership, we know how strong the new 2019 RDX is out of the gate," said IndyCar driver and GRP owner Graham Rahal in Acura's release. "I didn't want to mess with a good thing. Sometimes, subtle enhancements can make a big difference in the look of a vehicle. And that's exactly what my team and I aimed for with this GRP RDX."

Extra carbon fiber details, A-Spec-exclusive Apex Blue Pearl paint, and eye-grabbing graphics distinguish the GRP RDX A-Spec from its kin and dress it to fit in with Acura's other cars on display at SEMA. Their likes include the NSX GT3 Evo, ARX-05 DPi, TLX GT Pikes Peak race car, and ILX A-Spec.

Rumor Mill: Leena Gade May Jump On Board at Rahal Letterman Lanigan Racing

The ex-Audi LMP1 race engineer recently left her role at Schmidt Peterson Motorsport and is reportedly in talks with Team RLL.