The new Volvo S60 is the first of the company's vehicles to be made in the United States, and it packs up to 415 horsepower. 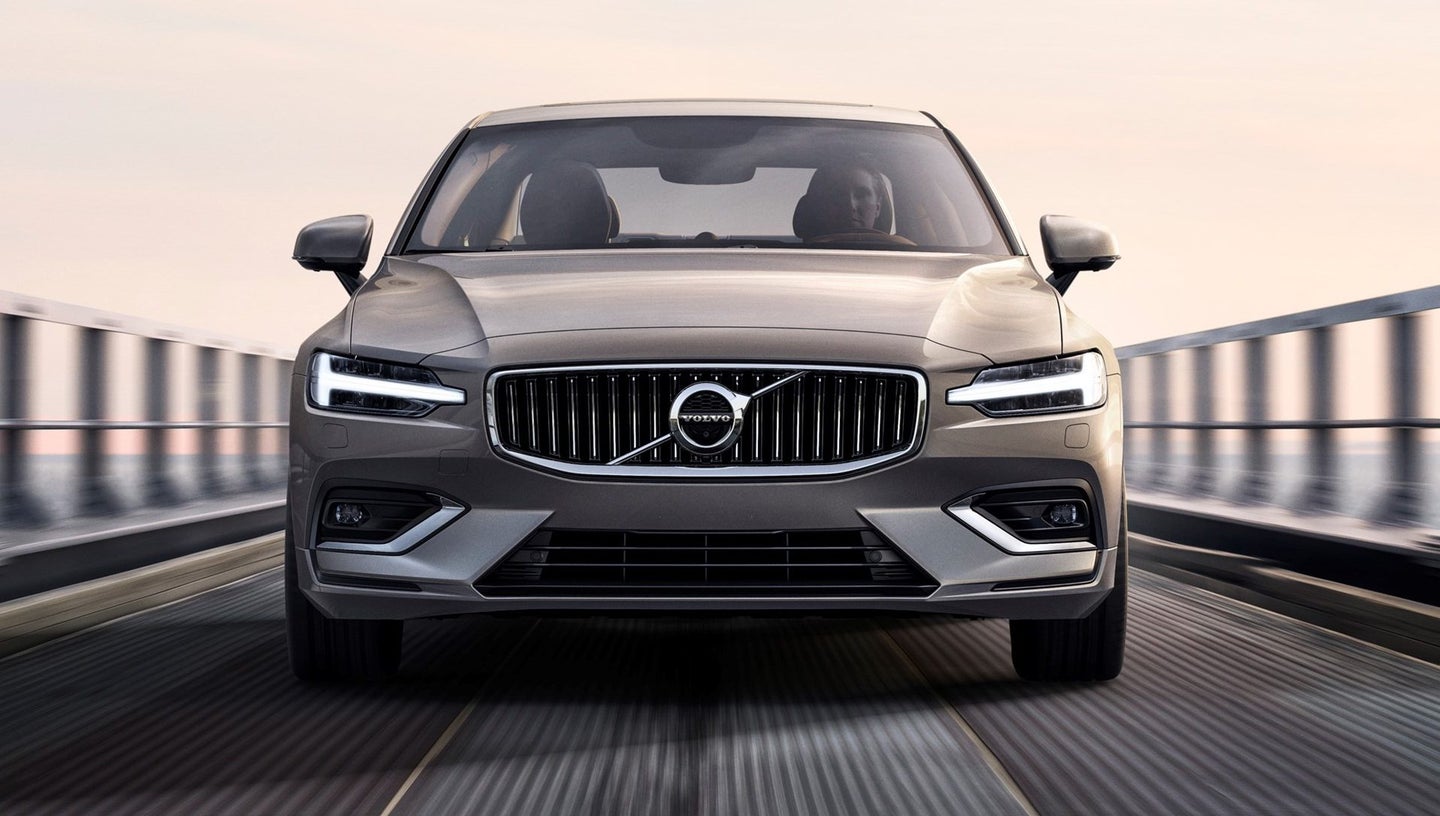 Topline: On Wednesday, Volvo commemorated the opening of its first factory in the United States, located in Charleston, South Carolina, with the launch of its 2019 S60 premium sports sedan.

What's New: Volvo burns the bridge to diesel in the new S60, a first for the Swedish automaker. Instead, it folds the S60 into its plans to add electric power to every vehicle it launches in 2019 and beyond, integrating a pair of all-wheel-drive, performance hybrid powertrains.

The milder of the two is the T6 Twin Engine All-Wheel-Drive plug-in hybrid, which can dump a total of 340 horsepower on the road at full beans. Its bigger T8 brother, which utilizes the same hybrid system, one-ups the T6 with 400 horsepower, 313 of which are gas-provided, as stated by Volvo to The Drive. Both are walloped in the teeth by the range-topping S60 T8 Polestar Engineered, which somehow grinds out 415 horsepower and 494 pound-feet of torque from two liters.

Volvo confirmed to The Drive via email that the T8 powertrain will not be available at launch, but will indeed arrive for the 2019 model year.

The hybrid fearful can opt out of electric power when ordering their S60s, as the car will also be launched with combustion-only T5 and T6 flavors.

Volvo further invests in its reputation for safety with the addition of state-of-the-art assist suites. The City Safety system stands sentinel at low speeds, watching for pedestrians, bicyclists, and according to Volvo, "large animals." Re: Moose. On adequately marked roads, Pilot Assist can aid with steering, throttle, and braking, though not at speeds exceeding 80 miles per hour (130 kilometers per hour).

The S60's infotainment system is compatible with both Apple CarPlay and Android Auto.

Quotables: "The new S60 is one of the most exciting Volvo cars we've ever made," stated Volvo Cars President and CEO Håkan Samuelsson in the S60's press release. "It is a true driver's car that gives us a strong position in the U.S. and China sedan markets, creating more growth opportunities for Volvo Cars."

"The active chassis and drive modes deliver excellent control and an engaged performance that makes this a driver's car," added Henrik Green, senior VP of R&D. "It also brings the acclaimed technology from our 90 Series and other 60 Series cars into this segment, making it one of the best sports sedans on the market."

"The opening of our first American factory is a very big deal," chimed in Anders Gustafsson, Samuelsson's U.S. market counterpart, with regard to the new factory in which the S60 will be built. "Our U.S. business is developing well, our cars have won prestigious awards, and the new South Carolina facility will be a big asset to both Volvo Cars and the community."

What You Need to Know: Those excited for the Polestar-pumped T8 powertrain but unenthused with the out-of-vogue sedan body style will also be able to get their fix in the V60 and XC60, both of which will be sold with the engine as an option.

Fliers of the stars and stripes can be comfortable buying a new-gen S60, which as stated above will be built in a new South Carolina plant. The factory itself will see a $1.1 billion investment by Volvo over the next few years, which will add 1,500 jobs in 2018, and an additional 2,500 as the facility is upgraded over the coming years. At full tilt, the factory is projected as being capable of rolling 150,000 cars out its doors per annum.

The Drive contacted Volvo for additional information on the S60, and we will update when we hear back.