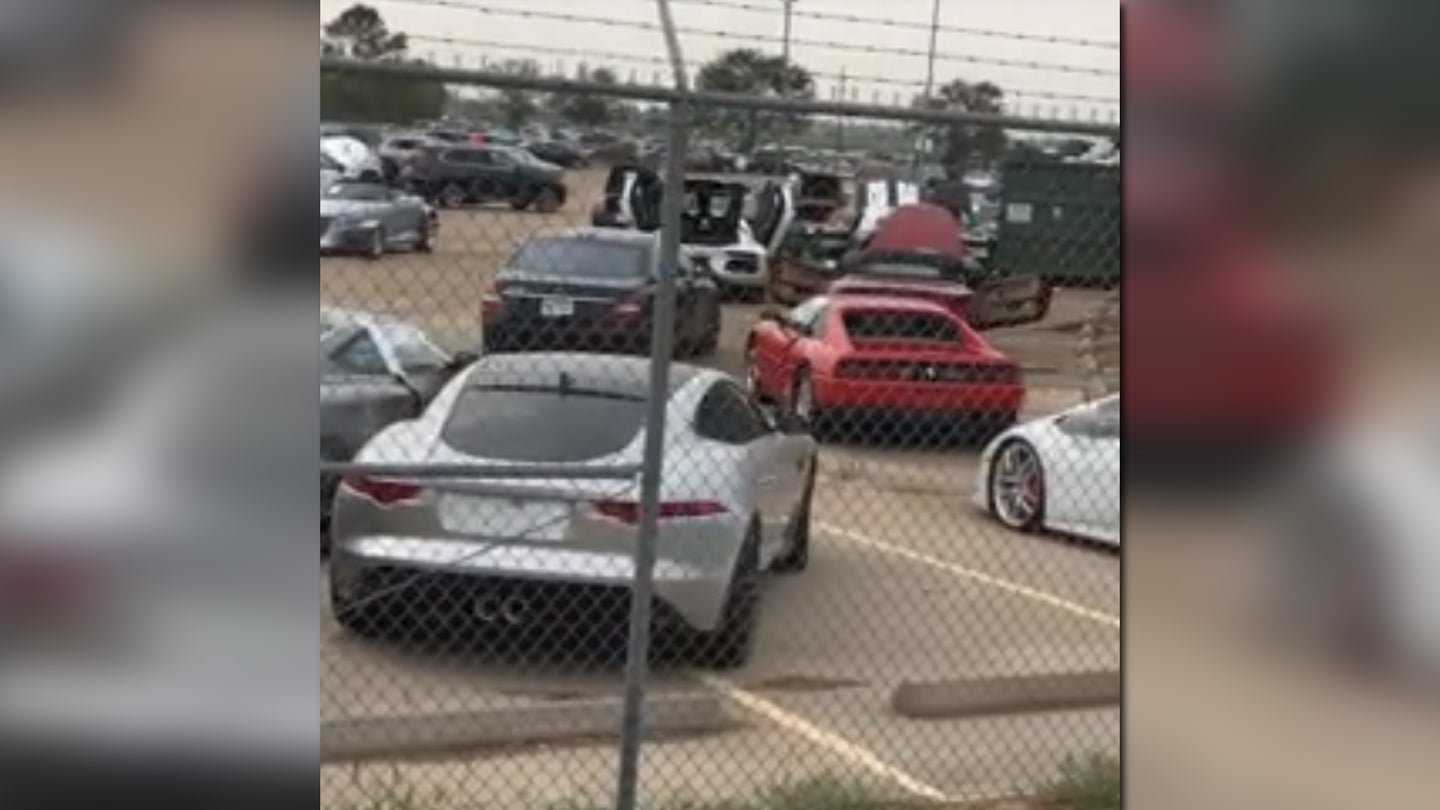 It can be hard to wrap your mind around the fact that Hurricane Harvey destroyed at least half a million cars when it swamped the Houston region with feet of rain. Even the drone footage we shared last month of the mammoth flooded vehicle holding pens is overwhelming to the point of abstraction. This drive-by clip showing an endless line of water-damaged Audis, Ferraris, Porsches, Maseratis, Teslas, Jaguars, BMWs, and countless other high-end cars should help bring it home.

As you watch, keep in mind that this is just one lot, at one storage facility (it appears to be at Royal Purple Raceway), and yet we're looking at millions of dollars in ruined exotics. Trucker Fredo Sanchez recorded the video as he drove through the complex, and it's a stunning one-take portrait of destruction that would make True Detective nod in nihilistic appreciation.

In addition to the brands mentioned up top, there's a Dodge Viper, Dodge Charger Hellcat, Honda S2000, Mercedes-Benz SLS-AMG, Nissan GT-R, Lamborghini Huracan, Land Rover Range Rover, Cadillac Escalade, Alfa Romeo 4C, several Bentleys, over a dozen Corvettes, a pair of Lotuses, and a handful of painfully-restored classic cars to mourn. That's by no means an exhaustive list—check it out for yourself and chime in below with anything special you spot.

Though as you'll see, just trying to keep up with the video is something of a masochistic game—especially so if you happen to be a claims adjuster. If you're hoping to score the next killer LeMons entry, Copart has been contracted to dispose of the vast majority of these cars through their always-fun auctions. Some will inevitably filter down through the shady side of the used car market, but others are likely too ruined for even that.

Recent reports indicate people in southeast Texas are getting car insurance checks at a decent rate, though other parts of the recovery effort continue to drag along as the region rebuilds. Hopefully anyone reading this who was affected by the storm is on their way to being made whole again.