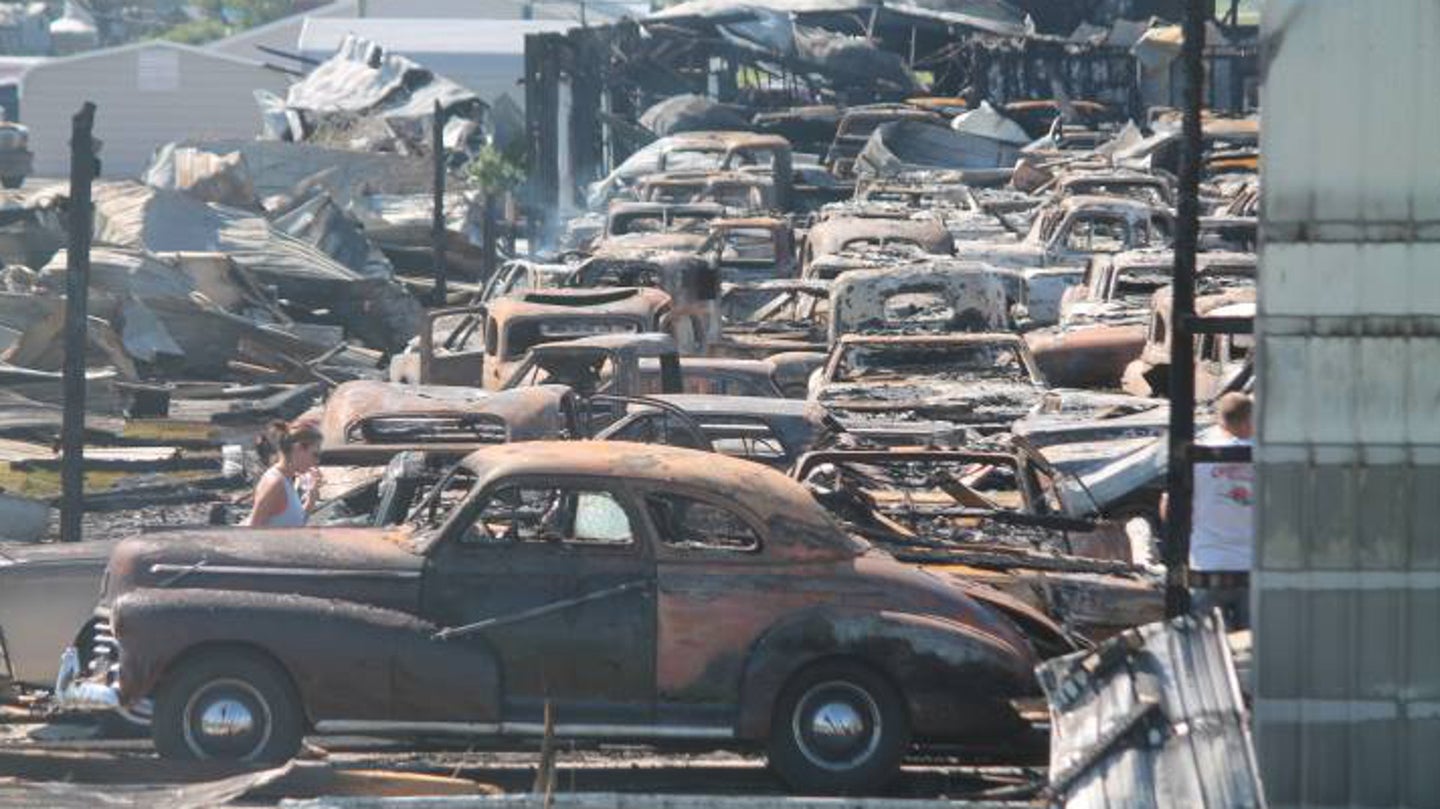 A massive five-alarm fire tore through a landmark classic car dealership in central Illinois Tuesday night, destroying its main building and at least 150 vintage cars that were being stored inside, according to the Alton Telegraph.​

Firefighters were first called to the scene at Country Classic Cars in Staunton, Illinois just after 8 p.m. and found the 510-foot-long, 50-foot-wide structure already in flames, which quickly spread to the rest of the building and caused the roof to collapse on the cars parked inside. It took fire crews several hours to put out the inferno—a fight that was made even tougher by the fact that there are no fire hydrants in the rural area where the dealership is located, meaning all the water had to be trucked in.

By that point, the damage had been done. Photos from happier times show the building was one giant room, with a metal exterior and wooden supports throughout. With that kind of construction - not to mention the 150 highly-combustible cars sitting inside - there was nothing to stop the flames from spreading quickly, Staunton Fire Chief Rick Haase told the Telegraph. Fortunately, no one was injured.

The complete destruction of the main building will also make it more difficult for investigators to pinpoint the cause of the fire, Haase added.

Country Classic Cars is well-known throughout the region for its eclectic collection of more than 650 vintage cars, stored throughout several large buildings on the property. In addition to selling valued old vehicles, the shop also offers repair and restoration services and serves as an informal auto museum for curious passers-by. Before the fire, their inventory included everything from a 1927 Ford Model T to a mint-condition 1954 Cadillac Eldorado convertible to a 1973 BMW 2002. It's not clear yet which cars exactly were destroyed.

Owner Russell Noel swapped farming for collecting cars about 20 years ago and turned his passion into his life's work, according to a profile that ran in the St. Louis Post-Dispatch just last month. He was particularly concerned with what he saw as a lack of interest in classic cars among young people, and sought to rectify that through attainable pricing and giving each one of his own grandchildren a classic of their own to care for. His business also rented out period cars to movie production crews.

With most of their inventory still intact, hopefully this won't be the end for Country Classic Cars. But it's always tragic to see so much vintage metal disappear in a flash.