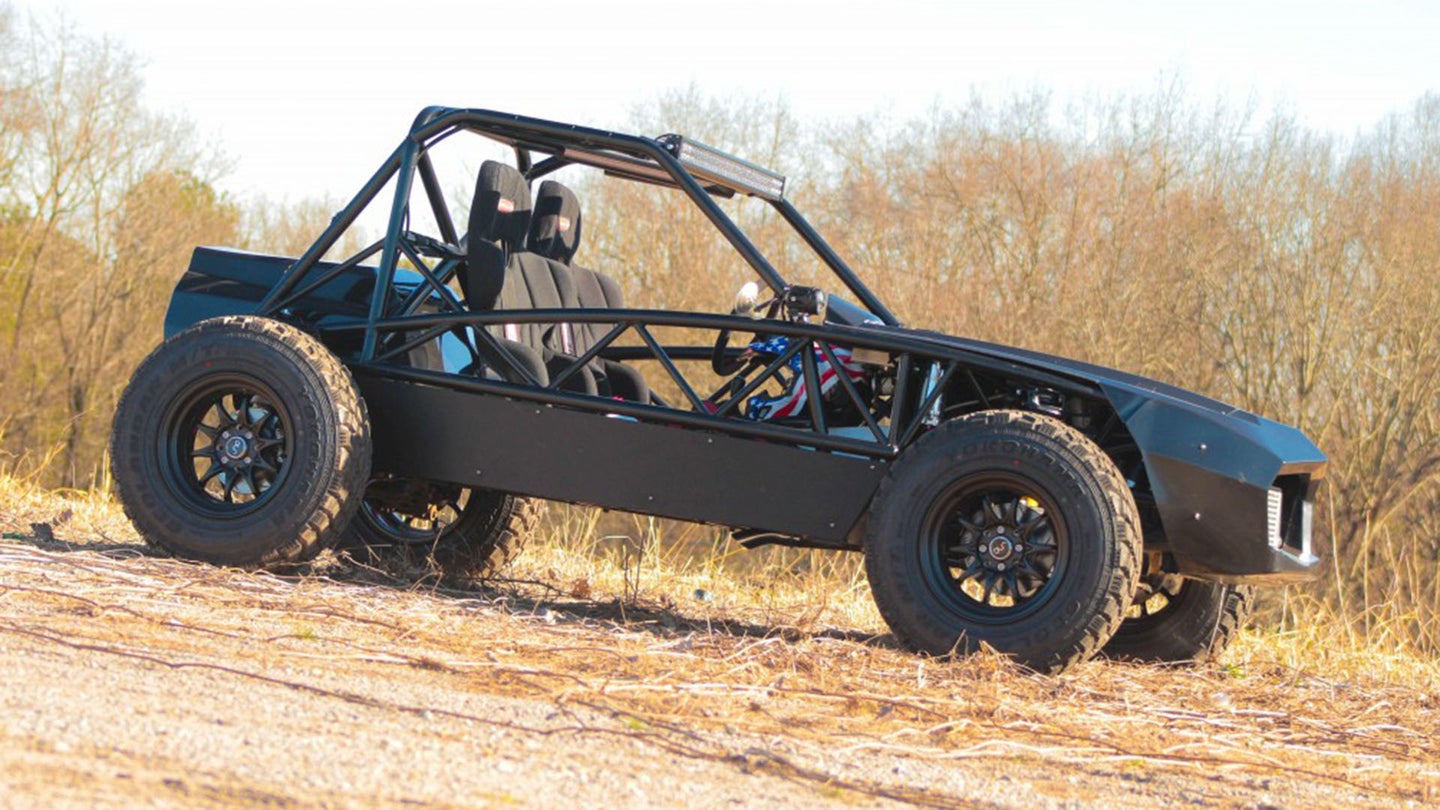 Up until recently, if you wanted a road-legal, tube-framed, rear-wheel-drive off-road buggy, you had but one choice—the Ariel Nomad. While undoubtedly badass, with a base price of $80,000 for the Sport model, the Nomad isn't the cheapest flyweight toy on four wheels.

Enter Exomotive, the American company behind the riotous Mazda Miata-based Exocet kit car, and the company's latest "Off-Road" derivative. Recognizing that people without six-figure incomes might want to get in on the off-road action, the company is offering its cheapest model for as little as $14,000, provided you build it yourself Ikea-style and BYOM (Bring Your Own Miata).

For the unfamiliar, the original Exocet uses the drivetrain, subframe, rear differential, suspension, and electricals from donor NA and NB Miatas, while the tube-frame chassis, custom stripped interior, and new body panels are all fabricated and provided by Exomotive. Weighing in at just over 1,500 pounds, the result is a small sports car stripped to its barest essentials, about as pure a representation of track day nirvana as you'll find for under six figures. The modular platform also allows LS V8 swaps if you so desire, giving it a power-to-weight ratio on par with hypercars costing ten times as much.

So how to improve on such an promising formula? Well, for starters, how about a newly developed long-travel suspension rebuild from Paco Motorsports, big knobby tires, and an NC engine boosted by the folks at Flyin' Miata to the tune of 252 horsepower? If that's not your preferred combination, you can still spec it out with the same wide array of engines from Honda, Ford, and GM as the street model—but again, you need to bring the powerplant to the party, and you still have to put everything together yourself.

That $14,000 stripper model is an estimated build cost including their parts, a basic Paco lift kit, and the donor Miata, and doesn't include any engine modifications. Going for that Flyin' Miata turbo, long-travel suspension upgrade and any other high-performance modifications can send the price into the $30,000 range. It may be double the money, but it's an all-terrain-slaying speed demon for less than half the cost of the base model Ariel Nomad. Zach Bowman is probably still smiling from his mud bath of a test drive last year, and that was without the newest suspension system.

To get everyone excited about their zero-door buggy just in time for spring, Exomotive released this teaser video on its Facebook page showing the Exocet Off-Road sliding and jumping around a dirt track in the woods. Check it out below, and get your wrenches ready.