Toyota's range-topping SUV has come a long way from its humble roots. But has it come far enough?

I finally did it: I'm a dad. The funny thing is, I've always owned dad cars, even before I needed to. Owning anything with less than four doors never made much sense, which is how I ended up with a stable of souped-up grandpa cars from the Sixties and Seventies. Now that I'm a father, the '74 Oldsmobile sedan I brought my wife and son home from the hospital in seems a bit dated. And that, my friends, is how I found myself on this quest to find the perfect new dad car. The latest installment: the 2019 Toyota Land Cruiser.

The 2019 Toyota Land Cruiser, By the Numbers

I spent almost a year of my life digging into the guts of a Toyota Land Cruiser, stripping hillbilly hippie-abused parts out and plugging in a 5.7-liter Chevrolet V8. In a related note, a brand-new Land Cruiser—which feels like a lightly-updated version of the 1988 model I rebuilt—already has a 5.7-liter V8 made by Toyota (and is therefore of better quality). It also has leather seats, a quiet interior and computerized crawl and traction controls. That all comes at a price as of 2019, though—a base price 2.3 times that of the average new car.

Yet despite the staggering sticker, the Land Cruiser continues to do what it has always done, regardless of interior finery: kick ass off-road. That's why NATO and the United Nations use them in war zones.

Toyota's big SUV looks unassuming from a few yards away, but once you climb inside and look out across its bulging hood, its bigness is palpable. The Land Cruiser hasn't changed a whole lot since the early '80s. Sure, it's gained about 1,300 pounds, but unlike most modern versions of older vehicles, interior space hasn't been all that compromised by structural and technological advancements.

The seats are some of the most comfortable available on the market today: taut, but not hard, with the power adjustments that aren't overly complex. Like any dump truck-sized vehicle, the back seat is generous, which makes it really easy to get a car seat in and out. The third row seats fold to either side—old-school Land Cruiser-style—and therefore don't cut into vertical space. The big back seat is great for infant seats, which usually already have the infant inside of them, but getting a child into the kind of seat that's already secured to the Land Cruiser's easy-to-use LATCH anchors requires more dexterity, owing to the seat's height off the ground. There was a step, which was nice, but I still had to execute a precarious hop to get in with a baby on one arm. (Fortunately, no babies were harmed in the making of this review.) And the seat back video screens—clearly an afterthought—cut into rear passenger space, impact the ease of car seat installation, and look like the silly add-ons they are.

Parents, who are always in need of more space for stuff, will find a friend in the Land Cruiser. The cargo area is huge—16.1 cubic feet with the third row in place, 43 cubic feet with the third row seats tucked to the side, and nearly 82 cubes with both back rows folded. It's basically a small van at that point, and will accommodate anything from full Costco loads to large kitchen appliances. 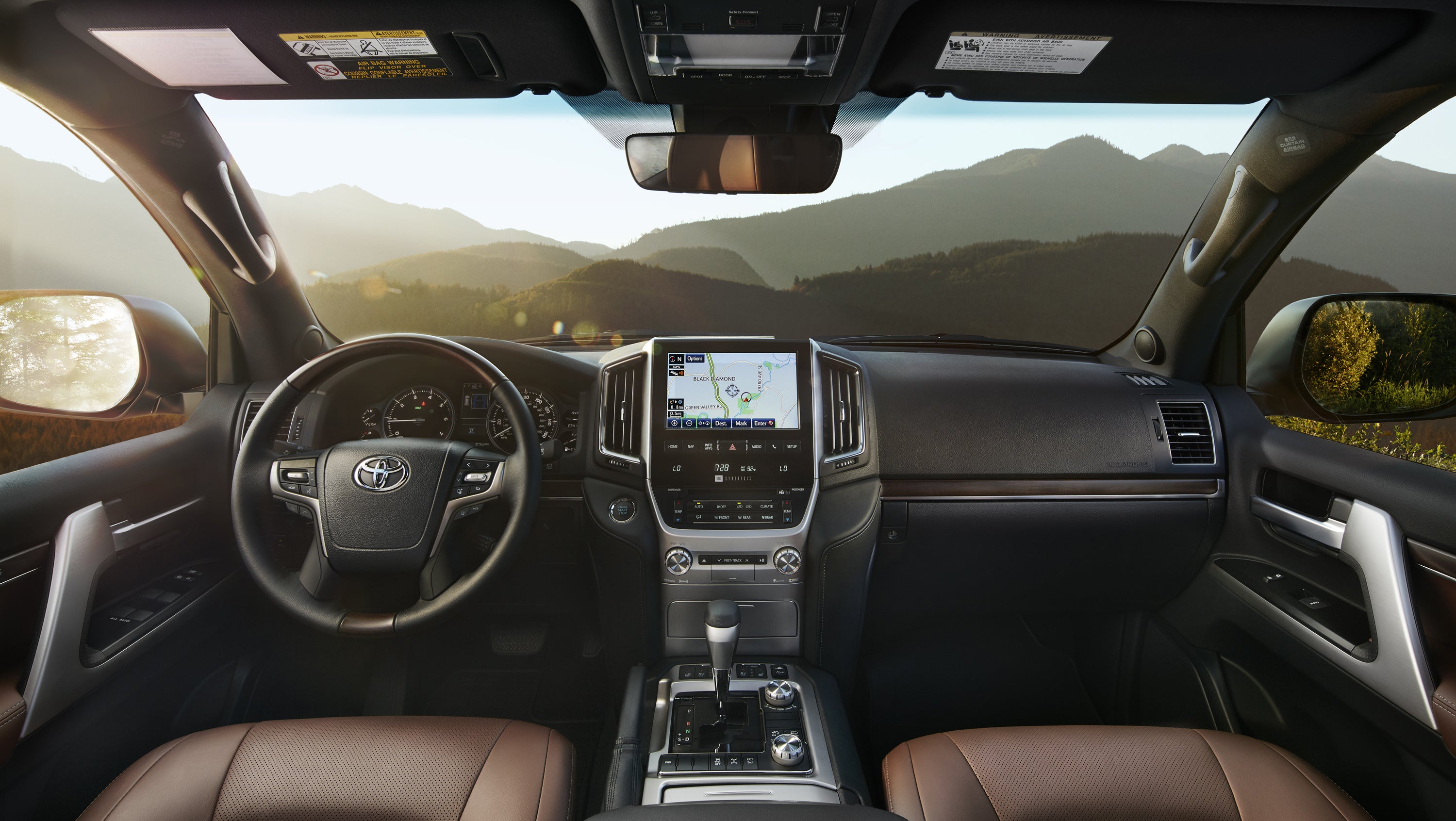 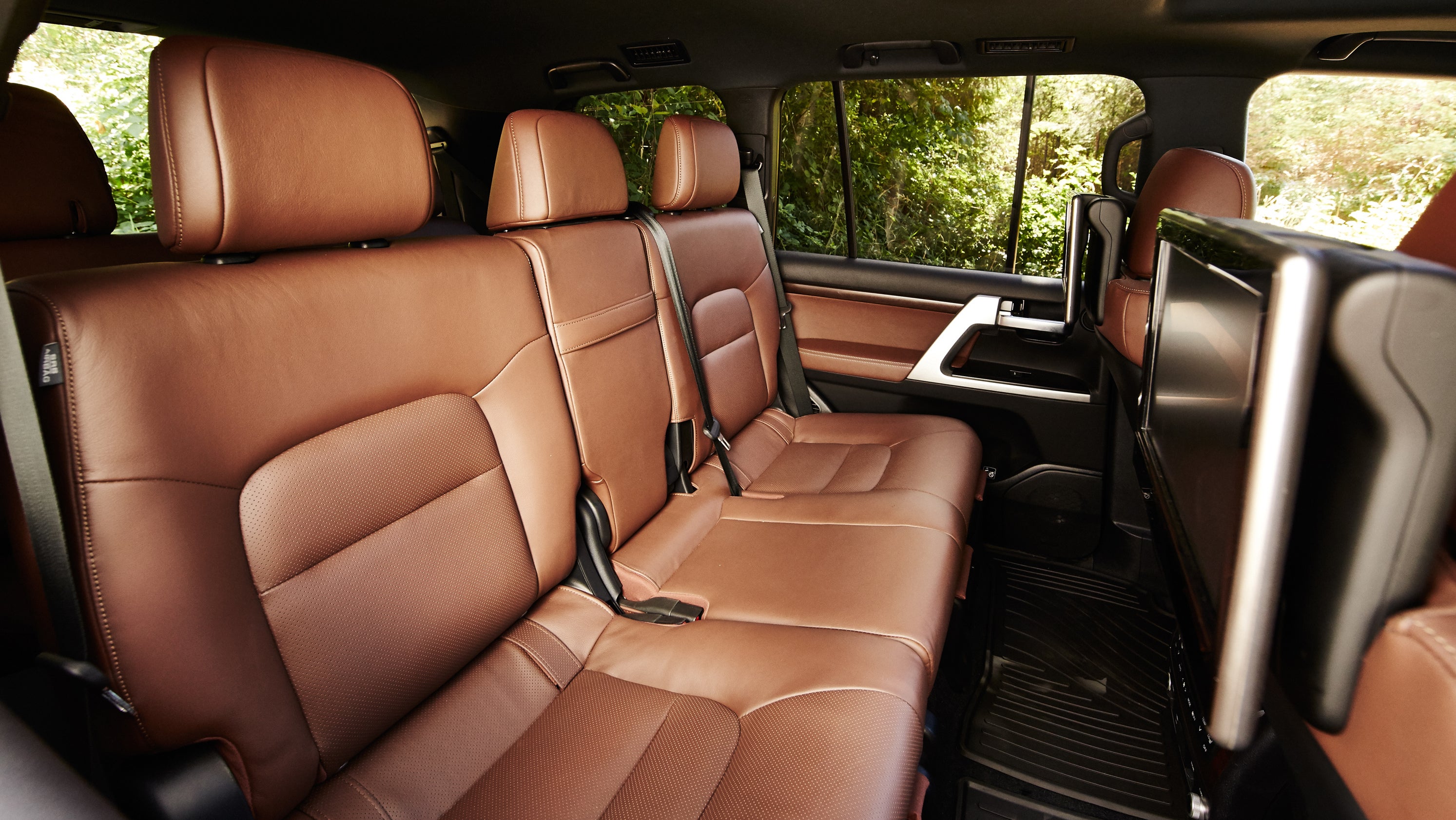 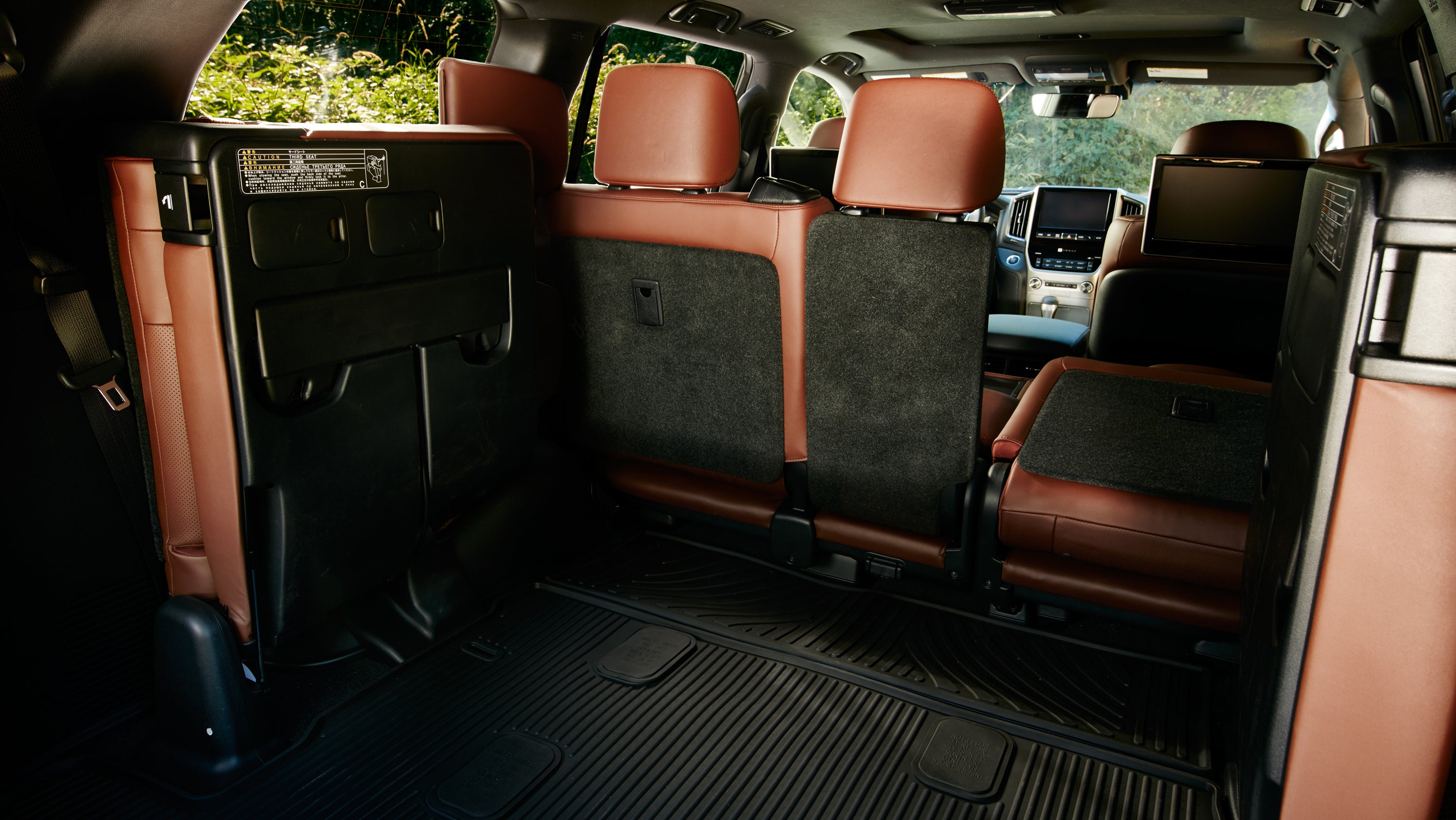 Because of its bulk, the Land Cruiser lumbers a bit on the road. Even though it has an independent front suspension (not the heavy solid axle like the one I encountered in our '88 Land Cruiser), road irregularities feel heavy through the front end. Overall, though, the ride is smooth; on a long highway trip, minor disturbances weren't enough to bother my one-year-old as he snoozed away in the back seat. When he finally did wake up, his cries were distant enough—and absorbed by leather and plush carpeting—that he didn't disturb me while I was driving through annoying traffic.

Fuel economy, as you can imagine it would be in a vehicle of this size and vintage, is dismal. On a mostly highway trip, I never saw anything as high as 16 mpg. But oh, the passing power…

Neither the Insurance Institute for Highway Safety nor the federal government have bothered to crash test the Land Cruiser—not even the earliest version of the 200 series, which came out more than a decade ago. Suffice to say, this truck has mass on its side; it tips the scales at nearly 6,000 pounds. Theoretically, that means it would obliterate most other vehicles on the road in a collision. But there's more to being a safe car testing than just "bigger is better", so the safety angle of this outdated rock crawler is really a big question mark.

The Long and Short of It

When the Tundra-derived FJ200 came out in 2007, it was already a bit ripe. Its emotionless styling and heavier weight further distanced the truck from its legendary forebears, which have always been popular for their off-road capability and pleasant aesthetics. Ground clearance has taken a hit, too as the once-proud overlander has become more bloated with bolt-on luxury trappings.

With all that in mind, the Land Cruiser is in a funny place, market-wise. Hardcore off-roaders will probably prefer the solid axle-equipped earlier models, while luxury-oriented family types will want something that looks a little more put together—a Land Rover, for example. For all its faults, though, the non-modern modern Land Cruiser offers something unique for those who can actually afford it: off-road capability and decent luxury wrapped into a package no one will notice. For UN peacekeepers and drug cartel operatives—the people most likely to buy this truck—what's better than that? So I highly recommend this truck to any mob boss who doesn't want people staring at his flashy vehicle when he picks up his kids from private school. This one's flashy deep down, and you'll be the only one who knows.