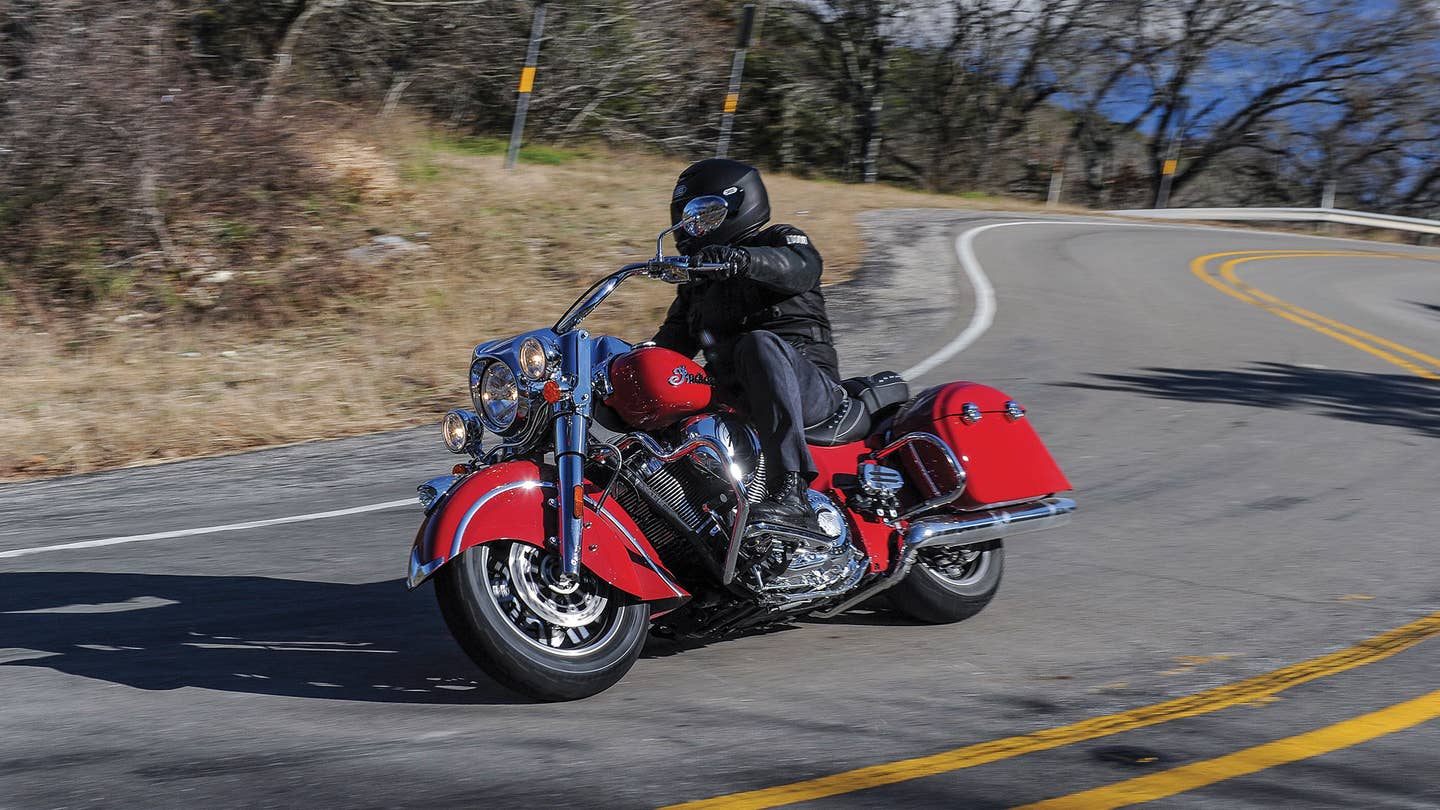 Indian Motorcycle’s resurgence as a bona fide rival to Harley-Davidson continues with the introduction of the new 2016 Springfield. In essence, this stylish new model—named after the town in Massachusetts where the company was founded—is Indian’s version of the popular Harley-Davidson Road King, a touring bike fitted with hard bags and a cop-style windscreen, both of which easily detach without tools.

Contrary to appearances, the Springfield isn't just a Chief Vintage fitted with hard bags. Rather, the new 2016 Indian Springfield employs the company’s touring steering head, not the cruiser head, which means it has a slightly steeper fork angle that will translate to quicker response and greater agility. What’s more, steering effort compared to that of the Chieftain and Roadmaster should be reduced because the Springfield isn’t saddled with the full fairing of those models, which reportedly weighs nearly 25 pounds (thanks in part to its power-adjustable windscreen).

A beefier rear subframe helps the Springfield carry those big electrically locked cases, which are also supported via weight-bearing pads on the lengthy twin exhausts. As on those other Indians, the rear air shock can (and should be) set for the specific weight of rider and passenger.

With Indian’s air-cooled 49-degree V-twin on duty in the rigid aluminum frame, the 818-lb. Springfield will not lack for power. This pushrod 111 cubic inch (1811cc) powerplant defines tractability, and its 6-speed gearbox is second nature, aided by an easy-pull clutch. Moreover, the ant-lock brakes, based on my experience riding a Chieftain, will offer superb stopping power without being the least bit grabby.

Cruise control is standard, and the low Springfield seat is like that of Indian’s other touring machines but with slightly different stitching. Other hardware includes 16-inch cast aluminum wheels with tire-pressure monitoring, plus rear floorboards adjustable for height and rake. And while there’s no wind protection for the rider’s legs, accessory deflectors can be added to the Springfield’s chrome highway bars.

In “Thunder Black,” the belt-drive 2016 Indian Springfield starts at $20,999. In “Indian Motorcycle Red,” it’s $21,549. Either color, this is a great bike that proves Polaris-owned Indian is making the right moves, slightly tweaking and modifying a good basic chassis to satisfy a variety of niches. Just like Harley has been doing so well for years.