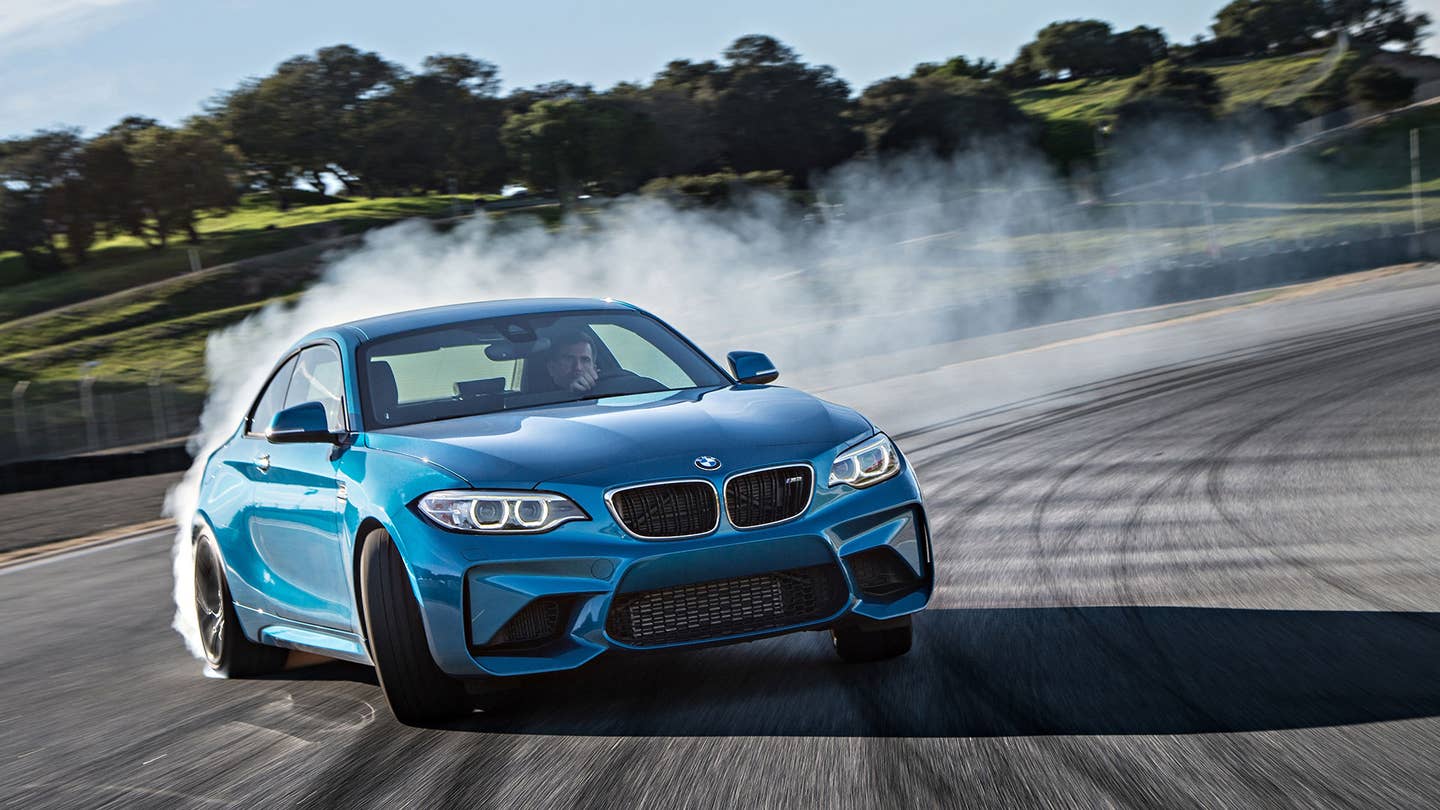 BMW means never having to say you’re sorry. But consider the new M2 coupe a bouquet of roses for enthusiasts who’ve felt jilted by a brand that’s seemed distracted— even unfaithful, at times—to its Ultimate Driving Machine vows.

Purists may renew their own vows. The M2 is son and heir of the original BMW 2002ti, that idealized palm-sized totem of what we think every Bimmer is supposed to be. We wrung this little sucker out, tried to find the holes in its A-game. But the M2 is damn near perfect, from the pure-blooded thrill of its engine and handling to its Tiffany-box scale.

My first taste is a perfect pairing, served over hot laps at Mazda Raceway Laguna Seca near Monterey, California. A convoy of M2s, all in matching metallic teal paint, look almost race-prepped compared with a standard 2-Series coupe. The M2’s hips flare, with front shoulders broader than an Eighties power suit; bold, badass and entirely necessary to accommodate ultra-wide front and rear axles borrowed from the larger M3 sedan and M4 coupe. The M2 is 8.2 inches shorter, yet it’s 2.5 inches wider overall than an old E46 M3. That looks as good as it sounds, hunkered on 19-inch, forged double-spoke wheels shod in Michelin Pilot Super Sport tires. (Those 19’s are a $1,200 option for M3 and M4, yet standard here, a first clue to the M2’s straight-shooting philosophy). Sculptural lower wing elements extend that visual width both front and back. A jaunty quartet of tailpipes pokes from the rear.

The size is right but, at first blush, the M2’s curb weight is disappointing. While those axles and other largely aluminum components (tubular anti-roll bar, control arms, wheel carriers) do trim weight, the M2 is 3,450 pounds with the six-speed manual gearbox, or 3,505 with the seven-speed, dual-clutch auto. That’s just 80 lbs. less than than the M4.

Still, the cabin is as simple and refreshing as a classic three-ingredient cocktail. Basically, there’s a chunky M steering wheel, a pair of bright analog dials, and whichever shifter suits your mindset and lifestyle. A blue stitch wends through deep-bolstered front sport seats; open, rough-hewn pores of carbon fiber are a nice change from the familiar glossy variety. Yes, a navigation system is standard, as are heated seats. But aside from $550 metallic paint (for blue, grey or black versions), a $2,900 upcharge for the automated gearbox and a $1,250 Executive Package, there are no options to worry over or pay for. Can this really be a modern BMW?

The first go-rounds at Laguna, including its head-spinning Corkscrew, have us asking the same question. Instead of an artificial soundtrack and steering, or a feeling that the driver has been demoted to co-pilot (a la M5 sedan), the M2 sweeps us up like a giddy bride being hustled over the threshold. The newly developed 3-liter inline-six develops 365 horsepower and 343 pound-feet of torque, with an overboost function kicking torque to 369 pound-feet. That engine also gets a modified oil sump and suction system to ensure steady lubrication during in extremis situations. There’s also an extra radiator, plus a transmission oil cooler for automatic-transmission models.

With storied BMW racing driver Bill Auberlen setting a ripping pace just ahead, I overcook a few turns at first. The resulting yaws only reinforce the M2’s goodness: The cars allows me to correct a mistake, rather than stepping in with electronic rescues like a helicoptering parent. In contrast to the robotic feel of some recent BMW helms, the M2’s electric power steering is hyper-aware of the need for communication in any relationship. With that palpable confidence boost, I’m off to the races, mind cleared of anything but the next lap, the perfect line below Laguna’s pedestrian bridge and over its hazy crests.

Of course the dual-clutch version I drive on track is the faster car, blipping to 60 mph in 4.2 seconds, versus 4.4 for the manual. For context: The M2 gives up 95 horses to the Corvette Stingray, but between the never-say-die thrust of its turbo six and superior auto ‘box, the BMW is just 0.2 seconds slower to 60 mph than the Chevy. More? More.

Brakes just don’t quit, betraying not a whiff of smoke after dozens of track laps. M Compound stoppers include blue-painted, four-piston calipers up front, hefty 15-inch front rotors and weight-saving aluminum hubs. And while the M2 can do work on the racetrack, the practical minds among us can rest assured that it’s every bit as rewarding on the road. We’re talking Mazda Miata or Porsche Cayman levels of fun, the kind that made a legend of the old M3.

Ignoring an official route that beelines toward Big Sur and certain tourist traffic, we shoot inland, skirting the Santa Lucia Range. The two-laners become cratered, lonely switchbacks, mossy trees planted practically in the road. Those give way to wide-open sweepers along the Arroyo Seco. The BMW owns them all, its rowdy, flap-valved M exhaust echoing on a fast descent into the breadbasket of America, the Salinas Valley. The green velvet folds of the Santa Lucia form a curtain backdrop to hazy farms and toiling migrants, and it’s time for the M2’s encore.

Before that, one quibble: You must also disable stability control to turn off the manual shifter’s rev-matching function. It means you can’t practice the old heel-and-toe without also casting aside your electronic safety net.

Then again, maybe BMW got it right. The M2’s Texas-wide stance and stability mean you’d have to screw up to get into trouble. Even on these public roads, I have no qualms about goosing the M2 in second gear to kick the back out in corners. Just a few inches of countersteer, and you’re looking at pitch-perfect controllable drifts.

But, unlike its most-recent predecessor, the 1 Series M Coupe, which was limited to about 740 copies stateside, the M2 won’t be rare. This is a full-on, scale-production M car. So unless your dealer is a hard case, a robust supply means fans won’t be arm-twisted into paying showroom premiums. Between a spectacular M2 and new keepers of the flame, it bodes well for keeping BMW’s mythology alive. Buy one. Then, like 2002ti owners of a previous, bell-bottomed era, you can tell the grandkids that you once owned an M2.