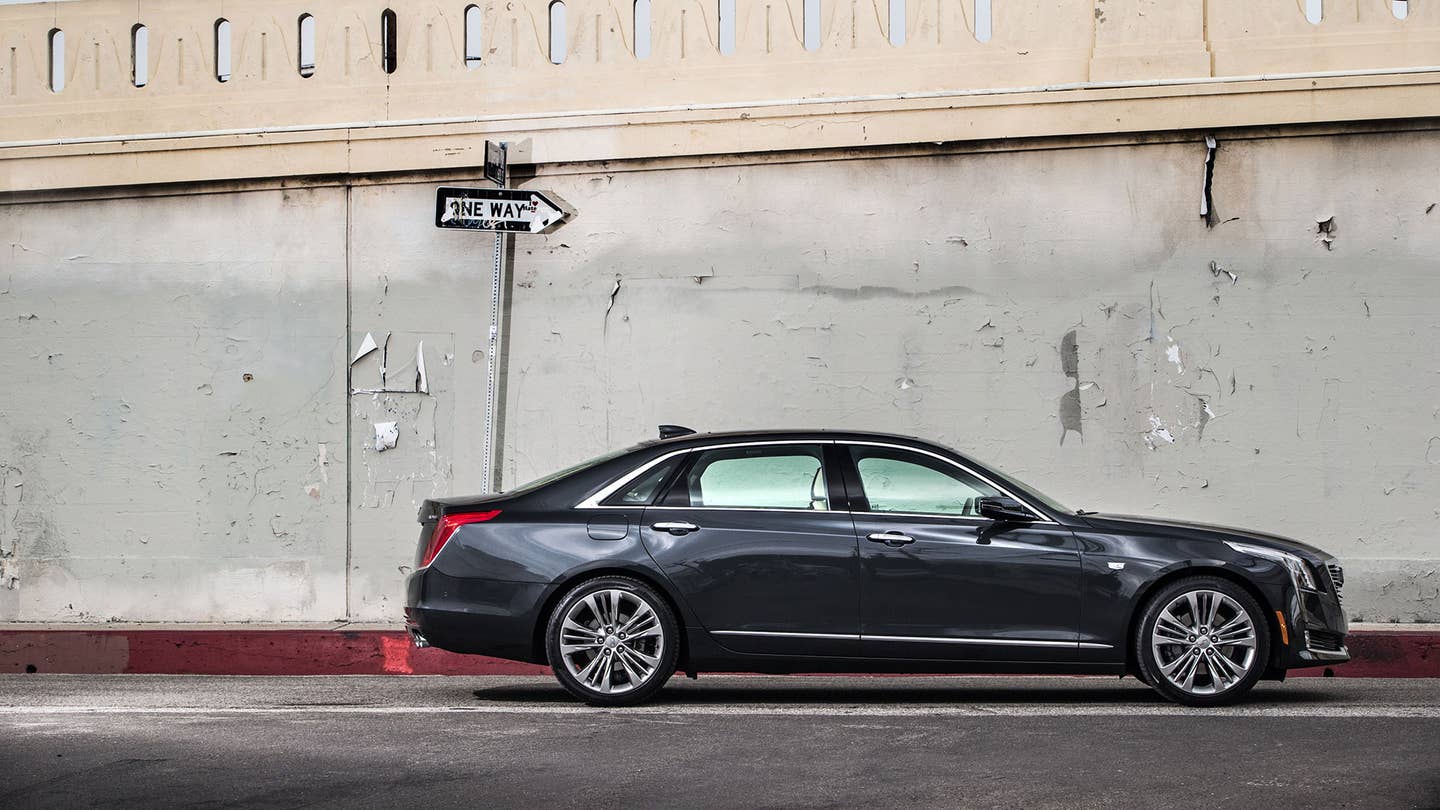 Ah, so you’re one of those holdouts: You want a big sedan with an even bigger back seat instead of a swollen SUV. A Toyota Avalon? Perhaps a Chevy Impala?

O.K., big shot, how about a Mercedes S-Class or BMW 7 Series, or a Jaguar XJ to match a Savile Row suit?

All right, now you’re trying my patience. A Lexus LS it shall be.

Are you not hearing me? That thing’s like an Avalon with fancier leather. I may be an AARP member, but I’m not dead yet.

And now we’ve reached the root of the problem. If you don’t have six figures to spend—and really, the German flagships are all $115,000 cars by the time the salesman is done with you—there are nearly no options that aren’t as boring to look at as they are to drive.

That leaves the Cadillac CT6. And defying my early hunch, Cadillac’s new, full-size flagship is anything but a consolation prize, as journeys through Los Angeles and the Cuyamaca Mountains east of San Diego recently made clear. The CT6 is nearly as long as an S-Class or Audi A8L, and every bit as quiet and solid-feeling. But backing Cadillac’s promise, the CT6 handles more like a midsize sport sedan, in part because it’s decisively lighter than other luxury flagships. Some of those competitors become Titanics to the CT6’s PT Boat: powerful and stateroom elegant, but less likely to dodge the iceberg. My seat-of-pants suggests that, among these big ‘uns, only the Jaguar and frisky new BMW 7 Series play a similar dynamic tune to the CT6.

Remarkably, that’s especially true of the Cadillac’s lowest-priced version, a playful scamp with a 2-liter, 265-horsepower turbo four, a conventional mechanical suspension and a rear-drive-only layout. That CT6 starts at just $54,490, or less than you’d pay for a loaded midsize CTS with the same engine. That tempting, Hyundai-style pricing strategy is a CT6 masterstroke: Cadillac boss Johan de Nysschen clearly wasn’t about to repeat the CTS’s mistake, with a jolting move upmarket and prices that left unsold models piling up in showrooms.

Add $2,000 for an AWD 3.6-liter V6 model with 335 horsepower. For $65,390, you get Caddy’s all-new 3-liter twin-turbo V6 with 404 horsepower and a robust 400 pound-feet of torque. It’s the industry’s first bi-turbo V6 that can deactivate cylinders (from six to four) to save fuel. Every model gets an eight-speed automatic transmission, with shapely magnesium paddle shifters on all but the base model. And to really dance cheek-to-cheek with the Germans on luxury and gadgets, Platinum editions come fully stuffed at $84,460 with the 3.6-liter V6, or $88,460 with the twin-turbo six. That stuffing includes active rear steering and magnetic suspension; reclining and massaging rear seats; night vision with pedestrian and animal detection; and a kickass Bose Panaray audio system with 34—yes, 34—speakers.

That’s an expensive Yank for sure, but still at least $20,000 less than a comparably equipped German rival.

This Costco-size package stretches 204 inches, just a few shy of the BMW, Audi and Benz, and 8.5 inches more than Caddy’s midsize CTS. Passengers will stretch out at will: The back seat tops the magic 40-inch mark for legroom, with 40.4 inches, though that’s about four fewer than the class-leading BMW.

To reveal the CT6’s lightweighting secrets, chief engineer Travis Hester takes us through an elaborate full-size cutaway model. A total of 13 high-pressure aluminum castings reduce the total part count by 20 percent; including a honeycombed-shaped beauty that runs from the front roof pillar through the front wheel arches. That single weight-saver replaces what would otherwise be roughly 35 pressed aluminum panels. Every body panel is aluminum. Aluminum spot welding is one of 21 patented processes in this new architecture. There’s nearly 600 feet worth of structural adhesives. Cadillac claims it’s the stiffest and quietest car in its history, with a lighter and more rigid structure than the far smaller Mercedes-Benz E-Class, Audi A6 or BMW 5 Series.

When I first spied the CT6 at the 2015 New York Auto Show, it seemed a bit wan, a mere plus-size CTS. I was wrong, dead wrong. Spread across the pavement in Los Angeles like a schmeer of black caviar, the Cadillac cuts an elegant and expensive-looking figure. It’s a Wall Streeter on his way to work, ready to close the deal. The surf-waving hood, the lovely LED-decorated headlamps and taillamps, the concave furrow across the rear decklid—the latter like an artist’s thumbprint drawn through hot metal—show Cadillac sweating the details hard. It’s literally capped by a quartet of shiny exhaust tips, a hint of stealthy power, wrought in perfectly crisp ovals.

The cabin doesn’t inspire worship like the S-Class’ luxury temple, but there’s enough to admire. Seats are properly sculpted, the steering wheel thick and tactile, a late engineering upgrade from a too-skinny model. Every material you see is genuine: leather, metal, gleaming woods, optional carbon fiber, including a version with a novel bronze thread. To our eyes, save the Cinnamon interior (too orange) for your cappuccino, and go with Jet Black. Or, atop the Platinum heap, the creamy Maple Sugar treatment.

“The CT6 is a Wall Streeter on his way to work, ready to close the deal.”

A few price-choppers do intrude, among them a scratchy standard headliner (the Platinum edition adds faux suede) and rear side window shades that seem as flimsy as Handi-Wipes. The Cue infotainment system still demands patience, but this latest 10.2-inch, 1280 x 720 HD version finally proves tolerable. In an industry first, the rearview mirror can switch from a conventional reflection to a camera view that expands the typical field by 300 percent. Translation: generous enough to depict seven lanes of LA freeway. It took about five minutes to adapt to the ultra-wide view, and then I never wanted to go back to the old way.

Instead of the usual, poorly integrated rear entertainment screens that appear hung from a coat hook, the Cadillac’s 10-inch HD screens motor out from the seatbacks. An HDMI connection hooks up external devices, and smartphones or tablets can stream Wi-Fi content onto the screens. A surround-view video system can record front or rear views, or 360-degree evidence if the security system is activated by a thief or a fender bender.

With its signature twin-turbo power plant, the Cadillac boasts 133 horsepower per liter of displacement, topping all key rivals. Throw in that svelte weight, and the CT6 3.0 TT scoots to 60 mph in 5.3 seconds. That’s about a second slower than BMW’s 750i with its monster, 50-percent-larger twin-turbo V8, but still feisty for a nominal flagship. With either the turbo four or 3.6-liter V6, the CT6 will clock 60 mph in 6.1 seconds. Cadillac engineers didn’t deny that they’re working on a CT6 VSport version with more power and athletic performance, though a full-on CT6-V—an analog to the 640-horsepower CTS-V—seems a longshot.

But like the Miata of flagship sedans, the CT6 is a car that’s about the drive, not straight-line bragging rights. I already worry for the Lincoln Continental, whose prosaic, front-drive-based Ford Fusion platform seems a major handicap—from performance to noise levels—versus Cadillac’s hyper-sophisticated architecture.

Owing to a New Year’s resolution, I wave as we pass the famous Julian Pie Company, in an old gold-rush town, en route to some of California’s most sizzling two-laners. The 3.0 TT definitely wears the power suit, charging to impressive velocities on downhill curls, its engine emitting a well-tuned rasp. During high-speed directional changes, its active rear steering joins the front wheels in phase to boost stability and keep us from becoming human bobbleheads. When I swing around for a photo in tight quarters, that system trims a welcome three feet from the turning circle by dialing rear wheels opposite the fronts. Caddy’s reliably excellent magnetic suspension brings the cush in Touring mode and then muscles up the ride—with the steering and transmission also joining in—in Sport.

This CT6 drives great. But the 3.0 TT’s 20-inch wheels, AWD and luxury options are the equivalent of scarfing up a few hundred Julian fruit pies, making it feel thicker and more stolid than the quicksilver turbo four.

That price-and-performance revelation comes on a loop through the Cleveland National Forest in the four-cylinder CT6. Hillsides sprout boulders like crooked tombstones. Bleached-skull mountains face off in the far distance, and the Cadillac takes its cue, tearing from corner to corner like a futuristic stagecoach set down in the Old West. The mere 18-inch all-season tires turn out to be a performance advantage, combining more than adequate grip with a lighter, delightfully connected steering feel.

The rear-drive CT6 carries a near-perfect 51 percent of weight over its front axle, compared with 52 percent for the 3.6-liter V6 and 53 percent for the 3.0 TT. Throw in the lightest weight and a flexible 295 pound-feet of turbo torque, and this is—surprise—the enthusiast’s choice, the CT6 that shrinks around its driver. And with its additional firewall sound deadening, the CT6 beautifully muffles the thrashy frequencies of the turbo four that mar the CTS (and ATS) with the same engine. Best of all, this is the most affordable CT6, and can still be had with treats like the spectacular, $3,700 Bose Panaray audio system—if not the magnetic suspension and rear steering, a $3,300 option on AWD models. Oh, and the four-banger gets an outstanding 22/31 mpg, versus 18/26 for the 3.0 TT.

So who, exactly, will defy country-club orthodoxy and choose a CT6? Crazy as it sounds, Cadillac may turn a page by taking one from Hyundai’s Genesis. One is a newborn luxury brand, the other 114 years old, but both are class underdogs. Like Lexus before them, the best and easiest way to lure buyers—badge-obsessed or otherwise—is to offer as much or more car for less money.

Between that come-hither pricing, American distinction and luxury/performance bona fides, this CT6 is looking less like atonement for past sins, and more like the blueprint for every Cadillac to come.