The 2018 G-Class may be Benz's toughest SUV, but it can barely get up a snowy driveway when it's shod with dangerously ill-suited rubber. 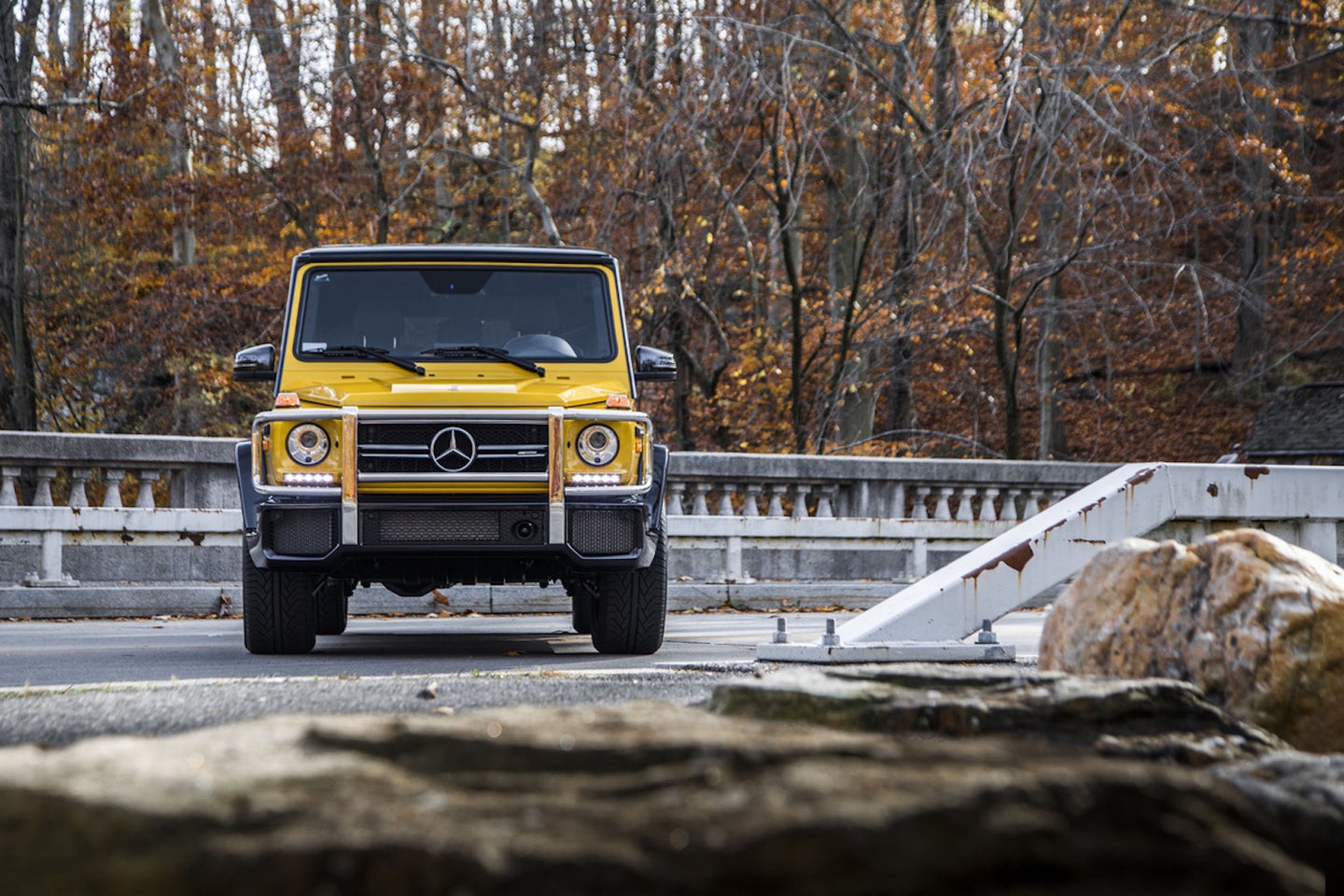 I landed in Detroit for the holidays, and received a familiar winter welcome in the form of drifting snow and single-digit temperatures. But I felt prepared, and by more than the bulky parka that I’d brought along: A 2018 Mercedes-AMG G63 awaited my pickup. And as my 11-year-old daughter brushed snow from the four-wheel-drive beast—a vehicle so tall, she couldn’t reach the upper windshield—I was already imagining how this $164,000, 563-horsepower G63—nee Geländewagen—would prove an ideal Home for the Holidays ride: Impressive in stature and luxuriously appointed, sure, but also impervious to the elements; an expedition-ready SUV with permanent four-wheel-drive, a two-speed transfer case, and three locking differentials. I was already imagining taking relatives for excursions on rutted country trails, over felled logs and icy creeks. They'd been in plenty of Jeep Wranglers and other off-roaders, but never one of these babies.

Then I left the airport, and (almost literally) ditched the fantasy. On a curling entrance ramp to the I-94 freeway, the mighty G63 promptly began sliding toward the snowy ditch, understeering like mad. WTF, I thought, as I backed off the throttle and finally wrestled the Mercedes back into its lane. It made no sense. I was going 25 miles per hour, tops. And the surface was slippery, but not that slippery. Perplexed, I eased the Mercedes up to about 55 mph and gently squeezed the brakes: The Mercedes skidded ahead like a toboggan, its ABS pulsing as though I was mashing the brake pedal to the floorboards. Right then, I knew the culprit.

Jumping from the Benz at the first stop, I spotted the weak link that was killing my traction and turning my knuckles white: A set of Yokohama Advan S.T. tires, the 20-inch, summer high-performance rubber that's original factory equipment on the AMG. As Yokohama boasts, the Advan S.T. was designed “to meet both the load-carrying capacity and high-speed requirements for the world’s fastest SUVs.” That includes a top speed rating as high as 186 mph...but with the manufacturer’s caveat that the tires are not designed for cold temperatures or snowy pavement.

You know, like you find in Michigan in January.

Here, with temperatures in the single digits, the Yokohamas might as well have been sticks of frozen butter for all the good they were doing in terms of grip. Mercedes’s brawniest SUV was now Samson shorn of his locks. A 5,600-pound off-road commando, demoted to a 98-pound weakling. Based solely on the Mercedes’s armor-plated mien, observers—like the Ford Fusion driver who flashed a beaming thumbs-up as he drove by—would surely assume that the G63 was the perfect tool for the job.  Yet in these conditions, a front-drive Toyota Yaris on all-season tires would have been the better, safer ride.

If the G63 could talk, it would have apologized (in German) and then begged for a set of dedicated, stud-less winter tires. Auto testers like me can talk about winter tires until we’re blue in the face (or more likely, the fingers). But until you’ve experienced the difference for yourself, it’s hard to express how magically a car performs with winter tires on snow, ice, or simply frozen dry pavement. Not only can you get where you’re going faster, but the feeling of safe, secure control—from cornering and braking grip to evasive abilities—is instantaneous, and almost euphoric. Even on the diciest, iciest roads, where you see a spun-out car every other mile, the tension in your hands and body melts like snowman Olaf in Frozen.

As Americans have embraced SUVs like they embrace Disney movies, one common mistake has been to assume that AWD and a tall ride height is some magic talisman against winter mayhem. Sure, AWD helps you accelerate in a straight line, and it's helpful for clawing out of a curbside parking spot or getting up the driveway you’ve neglected to shovel. But AWD does little to nothing to reduce stopping distances, or boost ultimate cornering traction in slippery conditions. As the G63 proved, it doesn’t matter if you’re driving all four wheels if none of those wheels can get traction. The tires and their contact patch remains the key too often overlooked.

Where even all-seasons tires begin to harden below roughly 45 degrees Fahrenheit (7 degrees Celsius), winter tires adopt special compounds that stay soft and deliver grip when temperatures plummet. The soft rubber can spread over and conform to tiny imperfections in the road surface, which is how any tire creates traction. But winter tires perform this feat even on what appears to be pure, glassy ice, and they do it without traditional studs or chains. Their tread blocks contain hundreds of minuscule “sipes,” zig-zagging cuts that act like a ski's edges to bite into snow and ice. Since your life could depend on that grip, it’s wise to spend a few dollars more: Winter tires from respected brands like Michelin, Bridgestone, Dunlop, Pirelli, Continental and Yokohama demonstrably outperform the cheap-o variety. If you don’t mind spending the really big bucks, you might also try Nokian tires (I have, and they’re mind-blowing), made by a company that’s been cranking out dedicated winter tires for Finnish winters for more than 80 years. Nokian’s Haakapeliitta tires, in fact, aced five better-known rivals in a Car and Driver test of winter tires above the Arctic Circle.

My first winter-tire epiphany came 20 years ago in Michigan’s Upper Peninsula, at a mothballed Strategic Air Command base where General Motors performs cold-weather testing and development. It’s actually not far from my family’s hunting cabin, where nighttime temperatures are expected to drop below -20º F this week. I drove a car that seemed a fish out of water, or maybe a frozen fish stick: A new, fifth-generation Corvette, shod with Goodyear’s then-new breed of winter tires. Even with rear drive, relatively wide rubber and minimal ground clearance, the winter-tired ‘Vettes ran rings around Chevy Tahoe 4x4s equipped with all-seasons.

More evidence: Prior to leaving New York for Detroit last week, I drove a Cadillac ATS-V with winter tires. I was excited to toss it into some wintery weather, and it didn't disappoint; the 464-hp, rear-drive Caddy also delivered enough sure-footed performance to shame any AWD car on standard rubber. That’s how much difference a tire can make. It’s why many European Union countries, along with Quebec, make winter tires mandatory for seasonal use. The technology has also improved dramatically, as companies experiment with hundreds of compounds that stay soft in freezing weather, but still deliver good wear and noise characteristics.

And yet, for all that, only one in four Americans in Snowbelt states bothers to switch. Obviously, there are practical drawbacks. If you don’t have a garage, basement or other place to store a second set of winter tires (and sometimes wheels), things can get tricky. And honestly, the combo of AWD and all-season tires works pretty well these days, especially if snow isn’t a constant companion where you live. Just don’t convince yourself that your all-seasons are in the same league as winter rubber, because it’s not even close.

Need more proof? A few years ago, Tire Rack put a Honda Civic on ice to demonstrate the dramatic difference. Shod with original-equipment Bridgestone Turanza all-seasons, the Honda required an average 53.6 feet to stop from 12 mph on ice. Switching to weather-appropriate Bridgestone Blizzaks, the Civic needed just 35.1 feet to halt, a 34-percent improvement that represented more than a car length—potentially the difference between a safe stop and a rear-end collision. And that was from just 12 mph. Imagine having to hit the brakes when you’re going 65 mph and cars in front of you start spinning like so many Brian Boitanos. Acceleration and cornering tests were similar. Even aided by traction control, the all-seasons Civic lost grip and understeered straight into orange cones when it tried to execute a simple 90-degree turn at 11 mph—a bit like my Mercedes, or any brake-locked, ditch-bound driver you might see this winter. The winter-tired Honda cruised through the turn like a Zamboni by way of Japan.

My experience with the G63 amplifies what I’ve long said about these vehicles: SUVs, no matter how powerful and performance-oriented, should come with all-season tires as standard factory equipment. Even after years of such vehicles, message boards on car sites are still filled with buyers of performance SUVs—Mercedes-Benzes, BMWs, Porsches, and more—who had no idea that their vehicles came equipped with summer tires, boosting dry-road handling limits that many owners barely use to begin with. Some learn the hard way, after an accident or near-miss, that these tires are unsuitable and downright unsafe in winter weather.

If an SUV customer demands summer tires, of course, make them an option—but only after a salesman makes the situation clear, and the customer accepts and acknowledges the risk; that he or she is willingly sacrificing any hope of safe operation in winter conditions. The SUV buyer in the Sun Belt, or the one who’s savvy enough to make a seasonal tire switch, can still choose summer tires for ultimate performance. Everyone else will be safer, and not simply owners who have no clue that their “all-conquering” SUV is fatally handicapped by summer tires. Consider innocent drivers who might get sideswiped or rear-ended by the unwitting pilot of a Porsche Cayenne Turbo or Jeep Grand Cherokee Trackhawk.

As for me, I could have tiptoed around Detroit for three days with the G63, but I had my daughter aboard, and I wasn’t taking any chances. I returned the striking “Solarbeam” yellow G63 to Mercedes, which graciously put me into a Mercedes GLS450 4Matic instead. (The G63's switch to seasonal tires had apparently fallen through the cracks, and I'm not blaming anyone). The first thing I did was check the GLS's black sidewalls, relieved to find a set of Pirelli Scorpions. They were all-seasons, not winter tires, and only so-so in the snow. But compared with the banana peels on the G63, my roadway grip jumped by multiples, which relaxed my death grip on the wheel and let me drive. At $84,000, the GLS450 cost half the price of the AMG G63, and this three-row suburban hauler didn’t look anywhere near as cool. But it’s hard to look cool when you’re dead, so the trade-off was worth it.