Tesla Invites You to Nap Across America

Autopilot 7.1 is a huge step forward—and the release’s timing is no accident. 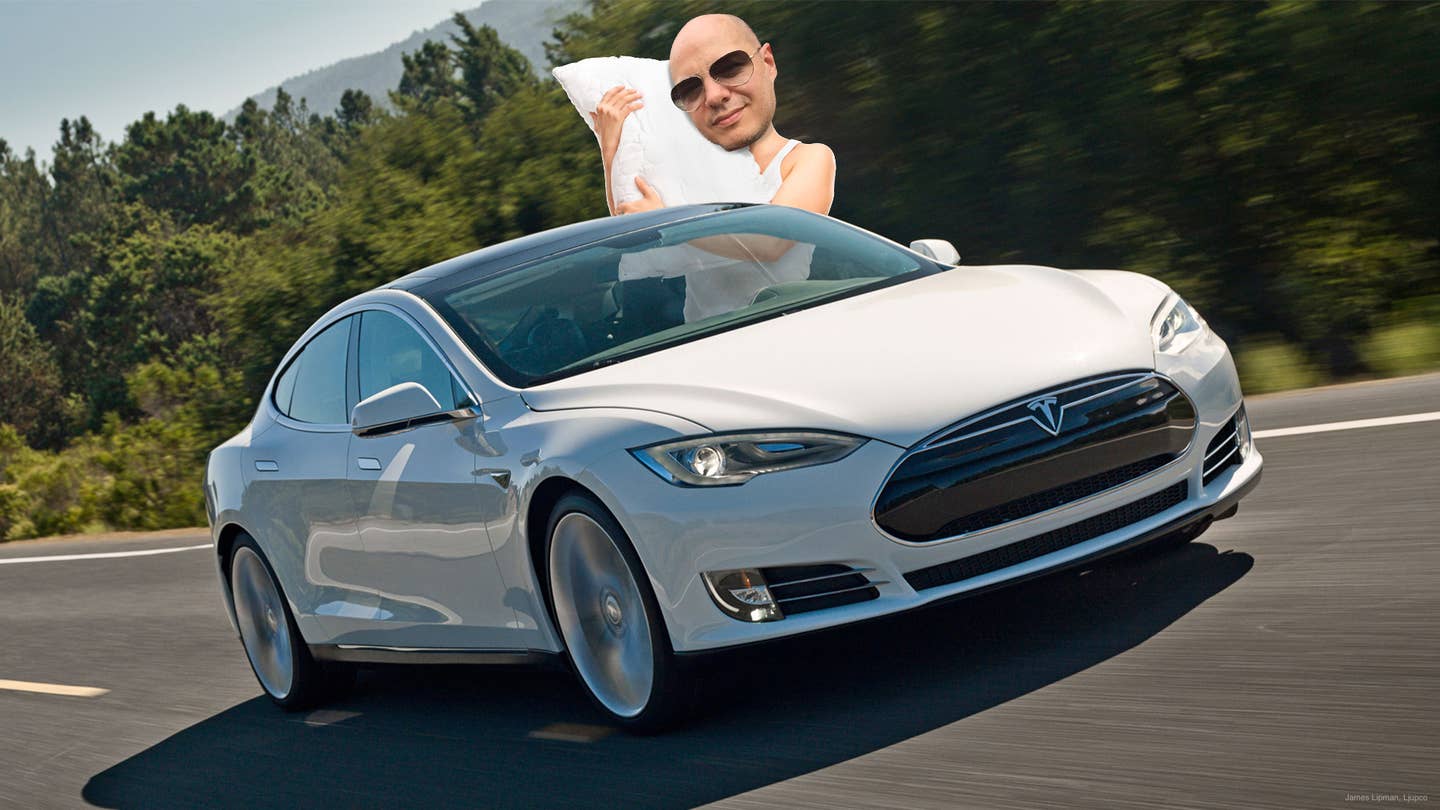 Weekends are terrible times for press releases. Everyone knows you want to roll out big news early in the week. Friday is bad. Saturday worse. Sunday is basically saying you don’t want anyone to see what you’ve got, but sometimes you just have to do it.

Which brings us to Tesla’s release of Autopilot 7.1—on a Saturday.

It’s no secret that I’m a big fan of the Model S and Autopilot. It’s a great car without Autopilot, but with it the Model S is absolutely unique. At least it was, until this morning, when Mercedes unveiled the 2017 E-Class. Everyone knew Tesla’s lead in making real Autonomous Driving (AD) available to the public couldn’t last, and now the first real competitor is on the horizon.

What It Takes to Be a “Tesla Killer”

Tesla’s fans have long been as passionate as its foes, but lost in the Twitter debates has been clarity over what Tesla really is. It’s not purely a car company, and may not be a car company at all. The Model S, X and upcoming 3 are merely components of a company also deeply invested in batteries (see Gigafactory 1 and Powerwall), Electric Vehicle (EV) charging (see Supercharger network) and AD software (see Fleet Learning).

The fact that the term “Tesla Killer” even exists is a tribute to the ubiquity of the Model S as the first and still definitive luxury EV sedan. “Tesla Killer” is now as common as “3 Series” has been in every sport-sedan comparo for 20 years, but therein lies the limited thinking inherent to the term. Anyone using it should really be saying “Model S Killer”, because Tesla the company is an octopus for whom the S is merely the most publicly visible arm.

If a legacy manufacturer wants to “kill” the company known as Tesla, it needs to build a battery factory, an EV charging network and deploy 25,000-plus AD-enabled cars with wireless updating and equivalent of Fleet Learning. The first two require massive amounts of time and money, and require a major shift in the mindset of traditional manufacturers. The third won’t be easy, but it will be far easier than the first two, and is essential if a manufacturer wants to stake a real claim in the Self-Driving Car market.

A true Model S killer would be an electric luxury sedan capable of driving itself, and no one has come close. Not yet. All we’ve heard are promises (see Porsche Mission E), but although apples are apples, some are sweeter than others.

Virtually every manufacturer on Earth claims to have AD tech on the ground today, at least in their halo models. This is true on paper, but not on the road. What they really mean is that they’ve deployed all the components necessary for AD. It doesn’t mean the car will actually drive itself. The current Mercedes S-Class is a tour-de-force incorporating all the same hardware as a Model S. Automatic Emergency Braking. Lane Control. Distance-Sensing Cruise Control. All terrific, but you still can’t keep your hands off the steering wheel indefinitely.

Autopilot 7 was the first suite of AD tech that unlocked the potential for self-driving cars and put it in the hands of the public in a demonstrable way. I’ve been kvetching since its October release at the insanity of legacy manufacturers whose halo models have long been just a software update away from duplicating Autopilot 7. Their answer? Tesla is irresponsible. It’s a beta release. We’ll release something when the tech is proven.

Is the new E-Class a Model S Killer? It matches or exceeds the Model S in every quantifiable area but two. Subjectively, it’s gorgeous, even if you’re not a Mercedes person. Objectively, its interior utterly annihilates that in the Model S. Annihilates. More importantly, its AD suite is a leap forward from that of any other legacy manufacturer.

Most importantly, Mercedes has lifted the 60-second steering limitation that has so far hobbled everything but the Model S, enabling real Level 2 AD. As successful as the latter has been, the general public remains unaware of the true potential of AD. The 2017 E-Class will be the first luxury car to break open the AD market.

That is the real significance of the new E-Class.

There are only two things it doesn’t have. One, it’s not electric. Does it matter? Mercedes has already promised at least four EVs in the next two years, all of which will incorporate the full suite of AD tech available in the E-class. If one of them is based on their Concept IAA, that will be a real Model S Killer. Two, it lacks Over-the-Air (OTA) updates. Mercedes’ new Car-to-X technology suggests as much, but isn’t specific about being Car-to-Mercedes. OTA updates are a critical part of Tesla’s Fleet Learning, which allows for dynamic improvements of its Autopilot logic. Everyone from Google to GM talks about the necessity of gathering data on the ground, and there is no substitute for having a critical mass of users in the real world. With 25,000-plus Autopilot users already out there, Tesla has had a lead in this area, a lead which won’t last. I’d be surprised if the E-Class doesn’t incorporate uploading of driving data. If it doesn’t, you better believe it’s coming.

Mercedes is hedging on EVs. Like almost all the legacy manufacturers, the company is splitting its product line between traditional powertrains and electric, then adding AD to everything. It’s the wise move for a company that doesn’t want to alienate its customers, but we’ve yet to see a legacy EV that truly grabs the Model S’s mindshare.

Everyone knew the E-Class would be unveiled on Jan. 11, and that its AD suite would at least match that in the Model S. Tesla had to release something. Software isn’t really sexy. I mean, it is, but it isn’t something you can see. That’s one reason Tesla didn’t show up at CES or the Detroit Auto Show this week. Why would it? Until the Model 3 is ready, Tesla has nothing new for us to touch or feel. Autopilot 7.1? Like jazz, you have you to experience it to get it.

In my rather concentrated experience of it, Autopilot 7 had issues, not flaws, and these issues all came down to the transition between AD and the human driver taking over. Autopilot 7.1 resolves the transition issues by limiting the speeds and conditions under which Autopilot will engage. All those naysayers who criticized Tesla for releasing a public beta were wrong. There hasn’t been an accident blamed on Autopilot 7 yet, at least none that I could find.

Autopilot 7.1 also adds features like “Summon,” Self-Parking and—any spirited “driver’s” favorite—speed compensation in turns, but that’s not the real news. The real news is that the Model S is no longer alone in bringing AD to the luxury market, and that the laurels of “Model S Killer” will now be won by one feature: an electric powertrain.

The next big question will be answered by Tesla’s coming Model 3. If Tesla is to retain its perception as a technological first-mover, the 3 must do more than hit its $35k price target. I predict the 3 will be the harbinger of Autopilot 8, and that it will be a huge step forward for AD, and the industry at large.