The Cadillac CTS-V in Germany: Tearing Up the Autobahn at 175 MPH in America's Super Sedan

Even Germany's mightiest sports sedans need to move out of the left lane for GM's 640-horsepower maniac. 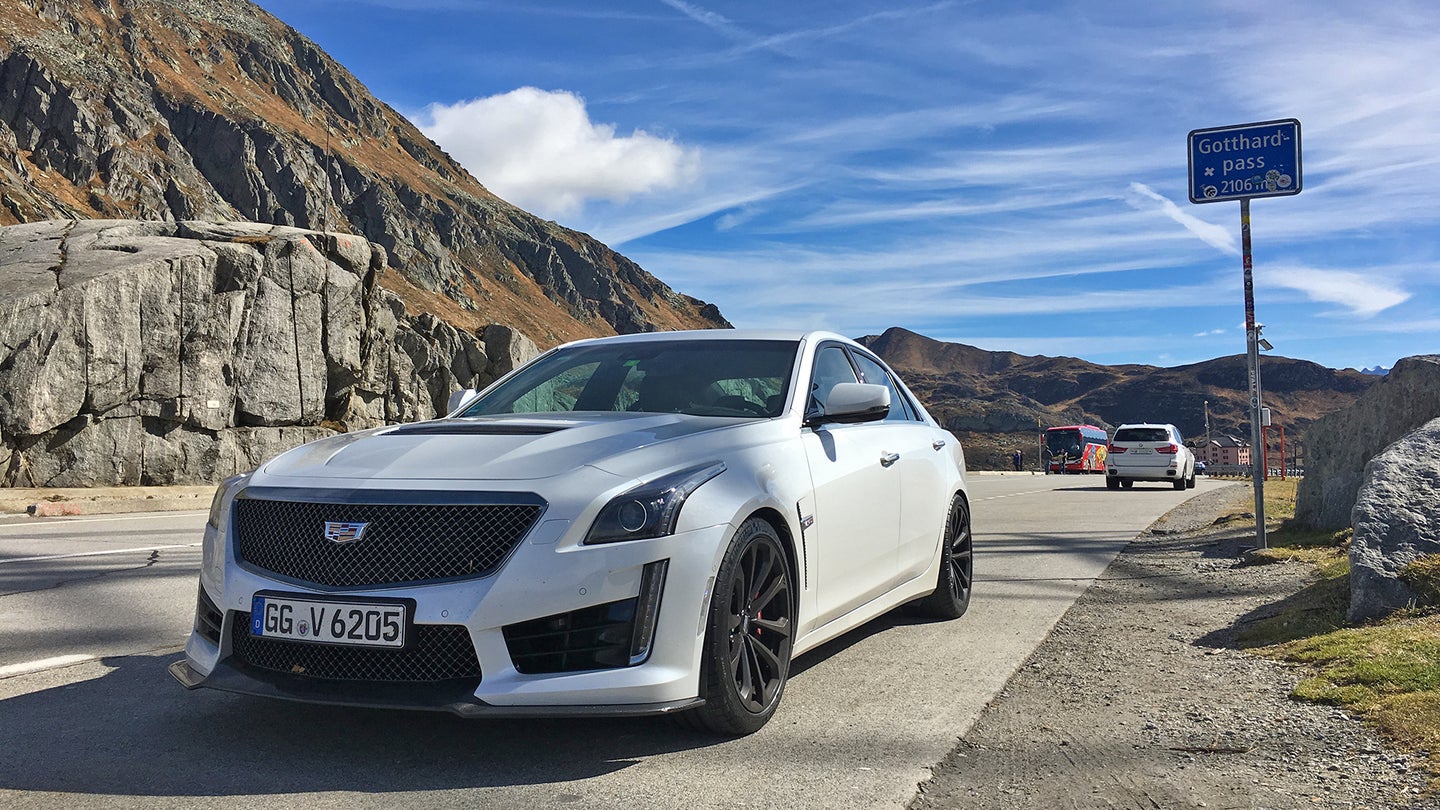 If there's one complaint that's been levied against the 640-horsepower Cadillac CTS-V more than any other, it's that this four-door supercar just might be too damn powerful for the real world. No less than The Drive's own automotive sage Lawrence Ulrich has suggested as much, writing back in 2015 that in the real world, lesser Caddys like the ATS-V and CTS Vsport are more or less as fast in the real world, making the CTS-V's extra ponies, in effect, an unnecessary excess of potency.

Granted, considering we're talking about a sport sedan, this seems somewhat like grousing that you wish your girlfriend weren't so attractive so you'd last longer in bed. But in a car it takes less than six seconds of foot-to-the-floor acceleration to break every speed limit in the country, the question at the heart of Lawrence's complaint rings true: What the hell are you supposed to do with this thing?

Well...what about take the all-American CTS-V to a country where that's not a problem? A country with literally thousands of miles of smooth, beautifully-maintained highway, specifically designed for high speeds? A place where drivers have the opportunity to legally blast along at whatever speed they see fit?

You see where this is going. Like General Eisenhower circa 1945, there's only one place on the planet where this Cadillac can achieve its true potential: Germany.

The limitless autobahnen aren't the only reason to bring this super-sedan across the Atlantic to Germany, however. All this Cadillac's prime competitors—the Mercedes-AMG E63 S, the Audi RS 7, the Porsche Panamera Turbo, the new BMW M5—hail not just from the country, but more specifically, from the southernmost part of it. So to see how the only American entrant in this overpowered category holds up, your humble author asked Cadillac's European division if he could bomb around the provinces of Bavaria and Baden-Württemberg for a few days to see how it holds up on the roads that forged its competitors.

Considering the 17,000 kilometers and change on the odometer when I picked up the CTS-V, they'd clearly said the same to plenty of other journalists before. Then again, as I quickly discovered, it's awfully easy to rack up the klicks on the long, smooth superhighways that criss-cross the country. (The $6-per-gallon cost of unleaded might be enough to put a kink in those plans, but anyone who can suck up my test car's €108,150 price tag—about $127,000—likely won't quibble at that.)

It's only at speeds illegal in the U.S. that you can really appreciate what this powertrain can do. Where most cars are starting to run out of breath, the Caddy is just getting started. Accelerating up from 80 miles per hour to triple-digit velocities fast enough to avoid most other cars—even on the autobahn, where prompt increases in velocity are needed to keep from being rear-ended by the boundless number of gray Audi Avants that flow past at a buck-ten—only requires about 20 percent of the throttle. Stay in it for a few ticks, and you'll find the car settles into a happy canter between 100 and 110 miles per hour. At those speeds, it feels as comfortable and stable as any ordinary sedan does on the American interstate going nine over the limit. It's so tractable, so rich in torque, too. Drop it into manual mode, leave it in eighth gear, and floor it with the engine turning 2000 rpm, and the speed flows like a powerboat—a seamless wave of growing acceleration that's smooth as butter.

But if you really want to feel the might of this smallblock, floor it with the transmission in Sport. There's a fraction of a second where the eight-speed auto—so good when it came out just three years ago, but already showing its age—realizes what you want to do. It takes just long enough for it to say, "Oh..."

...and then it drops four gears, and the world goes into fast-forward. Even at 75 mph, the back end scrambles around for a moment, the girthy tires struggling for grip until the traction control constricts the flow of power. Then the acceleration throws you back into the leather-and-microsuede seats, the familiar smallblock roar—rough and potent and delicious as Pappy Van Winkle—almost overpowered by the repulsor ray whine of the supercharger turning close to a thousand times a second.

To an American used to seeing miles per hour, the numbers flashing up on the digital speedometer seem impossible, jumping up 15, 20, 25 every time the display changes. In seconds, there's a three-digit number starting with a two staring you in the face.

And the CTS-V just keeps on charging. At 130 mph, where most lesser cars on the autobahn hit their limiter, it's just hitting its stride. At 155, where most German performance sedans were forced to tap out for years as part of a gentleman's agreement, it's still picking up steam. Even at 175 miles per hour—the point where I drew the line between the brave from the foolhardy on the autobahn, at least when there are other cars and trucks occupying the right-hand lanes—the Caddy is still pulling hard, ready to fight for those last 20-plus miles per hour on the way to the double-century mark that serves as the car's claimed top speed.

Watch the Cadillac CTS-V hit 274 kilometers per hour on the autobahn:

At those speeds, driving down the highway feels like the Death Star trench run. Cars on your right following each other at responsible distances blend together into a wall of metal, impenetrable as the safety barrier on the left. Your eyes and brain work like they've rarely worked before, taking in half a mile of roadway ahead at a time, constantly scanning for brake lights or blinkers or foolish drivers who decide to duck into your lane, not realizing there's two-plus tons of American steel coming up behind at the takeoff speed of a 747. Force equals mass times acceleration. 2,000 kilograms, 75 meters per second. Hit a wall—or another car—at this speed, and the Cadillac explodes with the force of a bomb.

The heavy steering feels feather-light at these velocities, a combination of both speed and the adrenaline flooding your body. You become very aware of the numb spot on center, the inch of play in either direction where the Alcantara-coated wheel doesn't feel nearly as rooted to the front wheels as it does for the rest of its rotation. You're living in that numb spot now; that's where you make all your adjustments. Turn much past it at this speeds, and you could very quickly end up in a high-speed tankslapper that winds up causing an accident bad enough to end up on CNN.

The Dodge Charger Hellcat may be the faster sedan on paper, with a power to weight ratio that leaves the Caddy looking bad and a quoted top speed of 204 mph. But I can't imagine pushing that four-door muscle car to these sorts of velocities.

Something they don't tell you about the autobahn: It's often crowded. Traffic was thick and heavy on most stretches I hit during three days criss-crossing the southern half of the country. Often times, even the speed limit-free sections—which tend to be the ones farther away from towns and cities, though there sometimes seemed to be little rhyme or reason to it—were jammed up with enough traffic that drivers naturally slowed down to 60 mph or less, making the road feel more like the Mass Pike to Boston instead of the A5 to Frankfurt.

Something else they don't tell you: The autobahn is always under construction. These sections are particularly frustrating in the CTS-V. Not just because the 80 kph work zone limit feels like crawling speed, but also because German construction zones tend to have some narrow, narrow lanes. The left-hand one—usually the only one free of the towering semis favored by European truckers—can be less than seven feet across. With the widebodied Caddy taking up 72.2 inches of that space, that leaves fewer than six inches of wiggle room on each side. Oh, and those aforementioned giant trucks? Yeah, they sometimes sway into the left lane.

Still, those low-speed zones are all the more easily conquered knowing there's a high-speed paradise somewhere down the road. But the CTS-V's entertainment value isn't only found on the autobahn; the two-lane country roads between the villages are a hoot, should you be willing to risk a speeding ticket hefty enough to keep you from ever crossing through German customs. (I risked it.) Plentiful passing areas make roasting slower cars—which is pretty much all of them—a breeze, and most of the B-roads are every bit as well-maintained as their limitless cousins, with none of the worry about coming across an awkward frost heave or tire-dislocating pothole we in the States have to be concerned with. And thanks to the supercharger force-feeding compressed air down the smallblock's windpipe, the Caddy didn't feel one iota weaker even at the 6,950-foot elevation of Gotthard Pass during a brief sojourn into Switzerland.

Admittedly, once you climb off the fast roads and into town, some of the Cadillac's flaws come into focus. The car's size is an even bigger problem in tight parking garages and millennium-old European villages than it is in those pucker-inducing construction zones; made for American roads, it feels as big as a '59 Eldorado on the Continent. The Cadillac CUE infotainment system is one of the laggards in the class, both in response time and how long it's been around. The interior, while certainly nicer than your average car, doesn't quite live up to the standards you'd expect of the Standard of the World—so long as this world has cars like the latest Mercedes-Benz E-Class and Audi A7. (Hell, even the Genesis G80 Sport has nicer trim bits inside.) And even if you don't mind paying $100-plus to refill the 19-gallon fuel tank, you'll probably get a tad frustrated with how often you need to pull over and top up. Maintaining autobahn speed in a 640-horsepower car, it turns out, leads to seriously crummy gas mileage.

But for several days of flying around Germany's highways and byways—especially with two adult male passengers and three man-weeks of luggage aboard—few cars could have melded comfort and speed the way this angry Caddy did. Indeed, few cars could come close to delivering this sort of mind-bending acceleration when their engines hauling around close to 4,800 pounds of metal, flesh, and cloth, period...which makes the fact that the CTS-V could do it while remaining composed and quiet enough to chat at 160-plus miles per hour all the more impressive.

And even if some of the Germans might be able to do it with a little more refinement...there's just something that warms the jingoistic cockles of an American heart about carving a path through the heart of Deutschland in a battle wagon made in the U.S. of A.