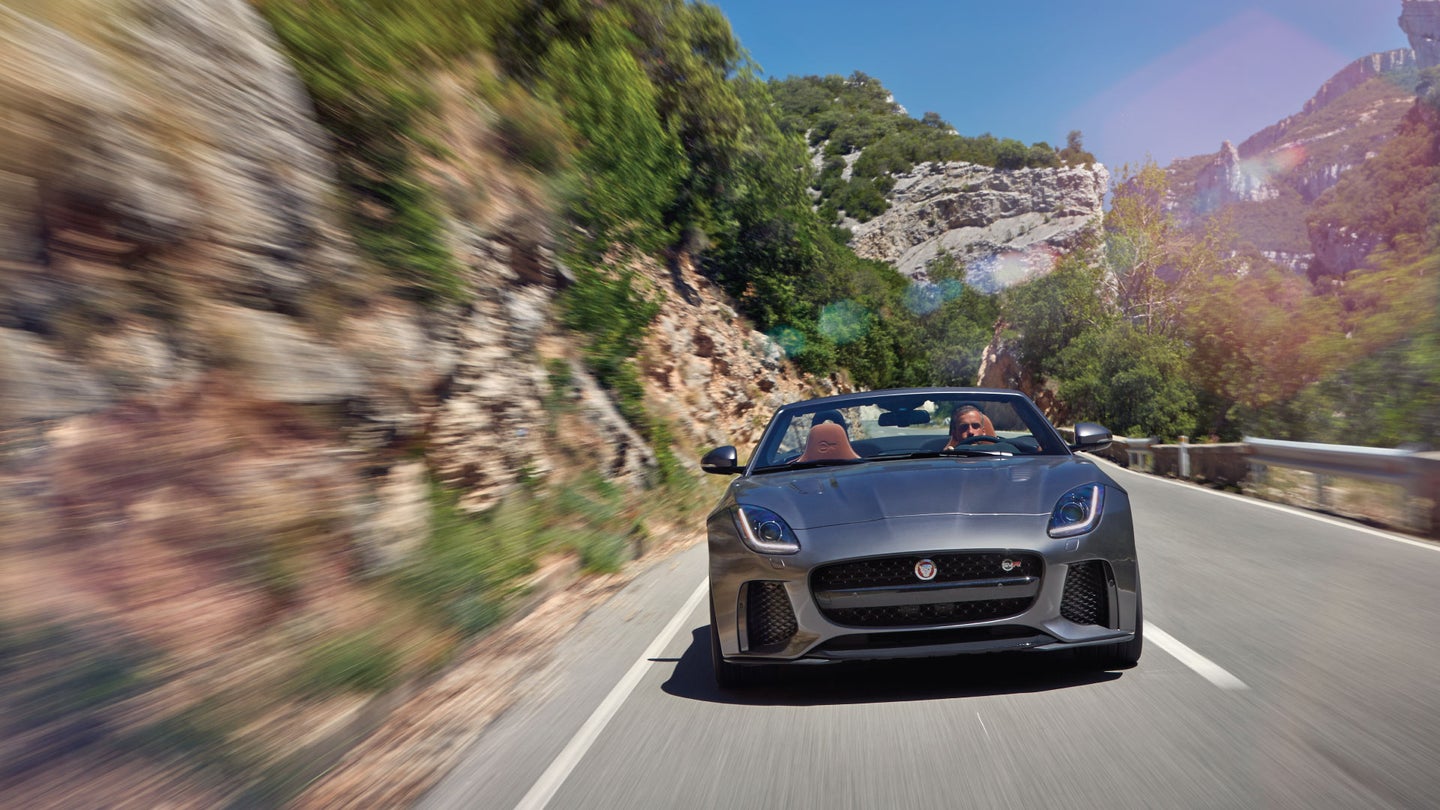 “It never gets old.” That’s what The Drive’s Ben Preston says as the 575-horsepower Jaguar F-Type SVR Convertible shrieks down a nighttime Brooklyn pier in our Red Hook neighborhood. He’s referring to the Jaguar’s infamous aural assault, an exhaust medley that makes a Porsche 911 sound like a librarian with laryngitis in comparison. This first Jaguar from the Special Vehicle Operations unit brings the noise with a new exhaust system formed from titanium and Inconel. Crackling, keening and backfiring, the sound reverberates off the spotlit Ikea to our right, and the spookily abandoned, nearly century-old grain terminal to our left. The lowered, soft convertible top only amplifies the maelstrom of fuel that Jaguar likes to detonate downstream in the exhaust. Seriously, dude, let’s get out of here before the cops show up.

The Jaguar’s supercharged V8 soundtrack, boosted via a console switch that opens the exhaust flaps, is guaranteed to make driver and passenger giggle like schoolgirls. The F-Type’s nakedly sexy styling, nearly five years after the car’s debut, still holds onlookers in its sway. To keep that feeling fresh, Jaguar now offers nearly 20 F-type variants, between coupe and convertible; rear-wheel-drive or AWD, and a range of V6 and V8 engine choices, including this year’s 400-hp, “400 Sport” V6.

This fall, an intriguing, turbocharged four-cylinder F-Type with 296 horsepower drops the price of entry to $60,895 for the coupe. Say what you will about a four-cylinder Jag. But for people who don’t need 500 horses, the four-pot is still one pretty sports car for barely 60 grand, including a frisky 5.4-second dash to 60 mph, a 155-mph top speed and a slender 3,360-pound curb weight. (Alas, a manual transmission will still only be offered on the 340-hp V6 version).

Sure, you could go nuts on a far-less-powerful Aston Martin V8 Vantage Roadster, or a Maserati GranTurismo Convertible, but now you’re past $150,000 just for stripper versions. Ditto for the one car I might covet most in this class: The 550-hp Mercedes AMG GT C Roadster is one beautiful brute, but it starts from $157,995, or $124,395 for the standard 469-hp GT Roadster. Bottom line, the Jaguar may not be your cup of British tea, but it’s hardly overpriced in the context of its competitive set.

Whether the SVR is worth a $25,000 upgrade over the 550-horsepower F-Type R is the bigger question. I’ll give that one a “no.” Nor is the SVR a true track-day warrior, in part due to the chunky, roughly-3,800-pound curb weight that plays hell on brakes after a handful of laps. (Optional carbon ceramic brakes help, but an experienced driving instructor told me the Jaguar’s carbon binders still get spongy in a hurry).

Road courses also expose the shortcomings of the eight-speed, paddle-shifted automatic transmission, despite its now-speedier shifts: It’s great on the street, including creamy takeoffs from a standing start. But on the track, the ZF unit is dusted by faster, smarter transmissions like Porsche’s dual-clutch PDK.

Yet at Monticello Motor Club in upstate New York, the SVR did prove to be the most track-capable F-Type yet. The greasy oversteer displayed by most F-Types—entertaining to a point, but a consistent lap-time penalty—is largely tamed by the standard AWD system, which can divert torque to the front tires even before the rears begin to slip. Despite the AWD interventions, the SVR remains frisky and its attitude adjustable, qualities I’ve always enjoyed in the F-Type.

The SVR version sheds more than 100 pounds and boosts its aerodynamic game compared with the R, including an active carbon-fiber rear wing (which is a bit too boy-racer for a Jag), and a revised front splitter and rear diffuser that trim drag by 7 percent and boost downforce by 15 percent. The F-Type’s steering, always heroically quick, is even quicker. The front stabilizer bar is five percent softer (versus Type R), and the rear five percent stiffer, to further goose turn-in. New, adaptive Bilstein coil springs sense and react to the road surface at 500 times per second, and the SVR can also shuttle torque from side-to-side.

What stays constant is the sinewy goodness of the all-aluminum chassis, and of course, that amazing 5.0-liter V8. Departing Monticello, the Jaguar—ever the gentleman—reminded me that it saves its best for the street, even if it’s parking at a posh restaurant or cobbled estate. This Jaguar is almost supercar fast, but by design it’s still a comfortable, everyday sports car. Even that sound remains a mellow, high-dollar burble whenever you’re not hammering the gas. And don’t delude yourself by dismissing the Jaguar as some purebred puss; on public roads, the F-Type SVR will tussle with anything. ‘Vette Z06, Nissan GT-R, Porsches, you name it.

Slabs of soft leather, metal, and carbon fiber make the SVR interior acceptably luxurious, but some of the old bugaboos remain. Those include a squared-off shift lever that’s never offered a pleasant handshake, and perfunctory analog gauges that might be fine for cheaper versions, but just look cheap at these prices. The brand’s new TouchPro infotainment system is far zippier than Jaguar’s previous Neanderthal unit, but it doesn’t matter when the system is always tripping over its digital feet, including by ignoring touch commands. Brush the analog volume knob, and a big circular “volume” dial fills nearly the entire screen. That dial makes you wait a good five seconds before it disappears so you can perform another function, such as changing a radio station. Too often, the non-intuitive system leaves your finger dangling in the air, as you wonder what part of the screen you’re supposed to touch.

As ever, people fairly drooled and draped themselves over the F-Type, though there are always exceptions. As I prowled through Manhattan’s Tribeca neighborhood, an explosive backfire from the Jag made a pedestrian ahead nearly jump out of his shoes. “Slow down!” the man demanded, even though I was traveling just 15 mph. Relax, dude, I wanted to tell him, or run and hide if you must. But the F-Type SVR won’t be ignored.

It’s Jaguar’s most powerful car ever.