How Sympathy for Tesla Almost Turned Me Into a Republican

Not even close, actually. But I agree with the Texas GOP on one simple thing. 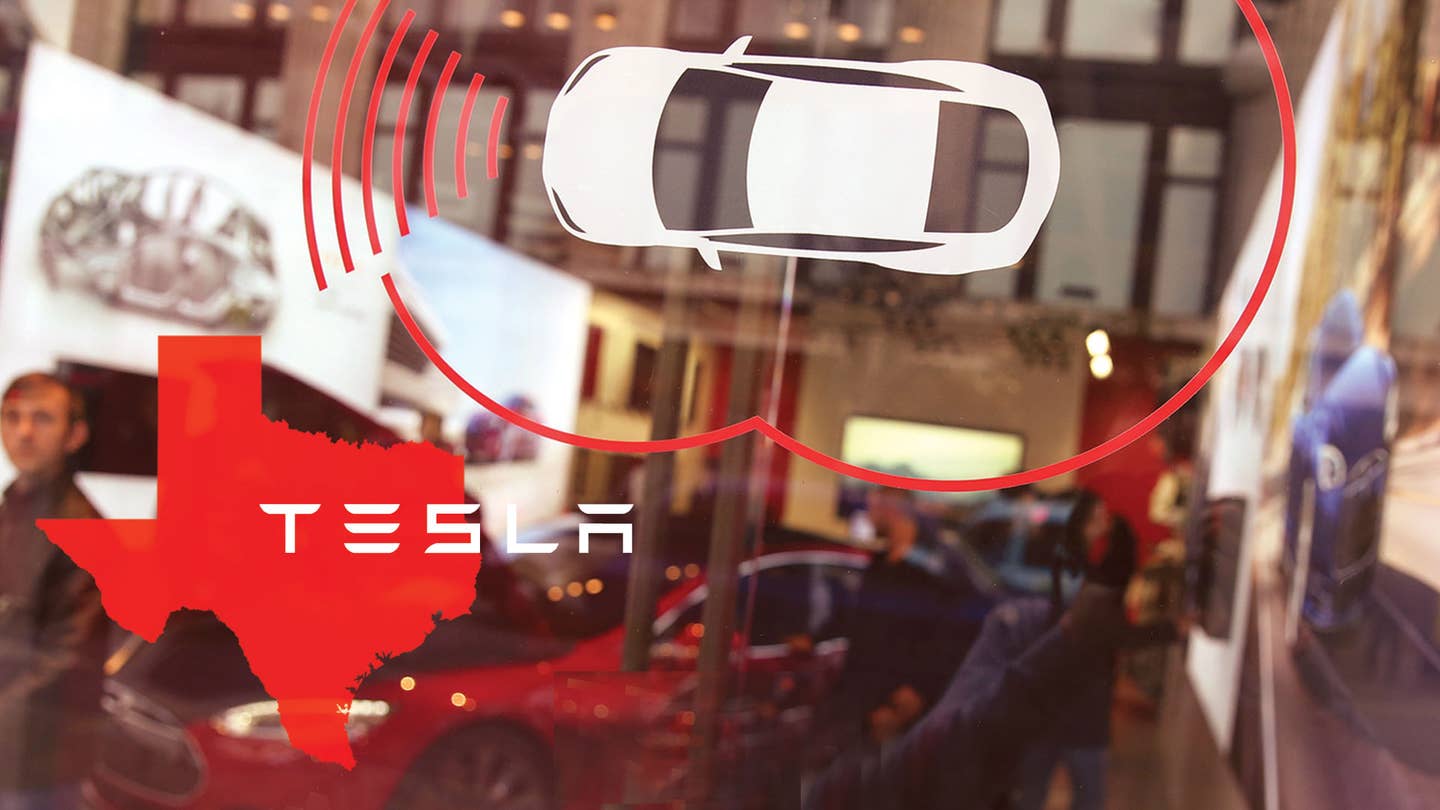 For all its freedom-bluster, Texas isn’t a true democracy. It doesn’t offer citizens the chance to pass referenda. Laws get made solely by the legislature, which convenes for just five months every couple of years. This allows special interests to claw into antiquated notions like cats on a scratching post. And few interests are more special to the Legislature than auto dealers. Texas state law brazenly prohibits “open competition” in car sales.

The Texas legislature’s Tin Men-era mentality doesn’t really affect most car manufacturers, which continue to lack the courage to back away from the dealer model, but it does affect Tesla Motors, which only sells direct-to-consumer. This creates the undignified situation wherein Texans who want to own a Tesla—and there are a lot of them—have to go to California to buy their cars. If there’s anything Texans hate, it’s being forced to go to California.

When I clicked on the Texas state GOP platform this year, I expected the usual delicious hate-read. It didn’t disappoint: The platform calls for ending abortion rights, banning gay marriage, and it contains lots of crypto-dominionist nonsense like “We affirm that the public acknowledgement of God is undeniable in our history and is vital to our freedom, prosperity, and strength.” But then I got to plank #208, “Direct Sales,” which reads: “We support allowing consumers in Texas to be able to purchase cars directly from manufacturers.”

Suddenly, I found myself nodding along to the Texas Republican platform. What? How could this be? I’m about as likely to support a Republican candidate as I am to voluntarily go camping for the weekend. And yet here was something in the platform that I agreed with strongly, and crankily. I wanted to know more, and now I do. Here’s how it came to pass:

In 2015, Tesla made an attempt to get direct sales through the Legislature, but it didn’t go anywhere. The next political cycle, they determined, would be different. Texas Democrats are basically toothless, and expend whatever clout they have trying to fight off continued assaults on women’s health-care rights. So Tesla hired David White, a Republican political consultant and former Rick Perry staffer, to carry their battery water. White began his campaign early, removing any Tesla-specific language from his pitch for car-sales freedom, embarking on a “Tesla In Texas tour” to meet with county organizations. No local Republican organization was too small. He pitched The Kingwood Tea Party and the Texas Republican Women, and by the time of the state GOP convention in May, he’d won the hearts and minds of the Republican army.

The opponents appeared at the convention. The platform was to be approved on a Thursday. On Monday night, Roger Williams, a state GOP representative who is also a car dealer, started calling members of the platform subcommittee, saying that this bill was a sop to Tesla. The Texas Auto Dealers Association treated thecommittee to a nice dinner, where Bill Crocker, a former RNC committeeman for Texas who’s now a lawyer representing car dealers, tried to scare them, saying that President Obama and Elon Musk had started Tesla together. It backfired. As one delegate told The Dallas Morning News, “The more we were getting calls and having people try to influence us to vote against it, just some of that Texas emotion took over from my committee. It was like, we’re going to do this!”

The proposal moved to the floor. There were attempts to amend the language, to change the word cars to “products” or “merchandize,” but those were roundly shot down. White’s people placed fliers on the chairs of all 8,000 delegates, including supportive quotes from Rick Perry, Newt Gingrich, and Americans For Prosperity. “For most industries,” the flyer read, “Texas is truly ‘Wide Open For Business.’ Texas has proven that when you remove frivolous government regulations and support free-market competition, job creation and innovation will follow…The current restrictions are a relic from decades past.” Delegates voted on each plank of the platform individually. The direct-sales plank passed with 89.6 percent of the vote.

It remains to be seen whether or not legislators will adhere to the people’s will once the legislature convenes. One car dealer calls the state’s automotive franchise law “as sacred as Paul’s letter to the Corinthians.” And Governor Greg Abbott, hardly an avatar of change, has said the state has “a very effective automobile sector that seems like it’s working quite well.” But the direct-sales people are ready. If the car dealers want to play poker, Tesla is all-in, and seems to have just about everyone on their side of the table.

I’m certainly betting with GOP Party regulars on this one, just like I’m with them on their call for legalized industrial hemp cultivation and removing “regulatory barriers for transportation entrepreneurship, to allow ride sharing companies to compete openly for business in our state.” But I’m not for abolishing the Federal Reserve, banning the minimum wage, withdrawing from the United Nations, or “building a high wall with a wide gate in order to prevent illicit border crossings.”

After all, I’m not some kind of goddamn Republican.

Finding Texas in New York City, From Behind the Wheel of a 3-Ton Cadillac