Hitting Manhattan (and Picking Up Chicks) in Nissan’s Mobility Concept 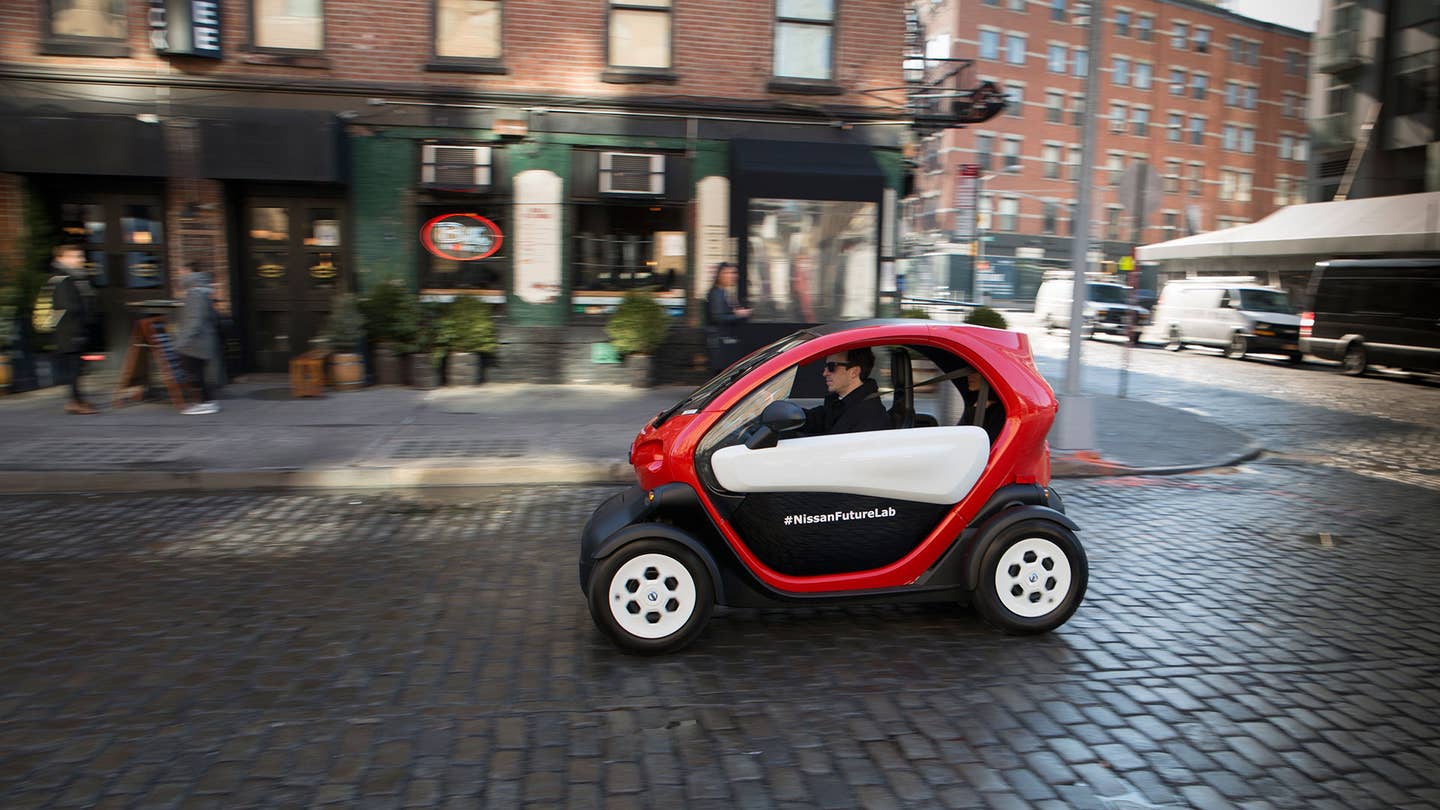 Is this a miniature golf cart? Or maybe a Fisher-Price toy, made from similar plastics. Call the Nissan New Mobility Concept (NMMC) whatever you want: It beats riding a rental Citibike on a blustery spring day in Manhattan.

Driving Nissan’s two-seat, scissor-door electric microcar prior to New York’s annual auto show, I experienced a mix of bemusement, curiosity and questions from passersby—especially while stuck in city traffic with nothing better to do. That’s sort of the point of urban pods like the Nissan, a near-mechanical twin of Europe’s Renault Twizy. Since I was touring stoplights at a pace any bike messenger could beat, it didn’t much matter whether I was driving a 600-horsepower Audi S8 Plus, as I had been all week, or a 17-horsepower, 13-kilowatt buggy that tops out at 25 mph. Either way, all I could do was sit back and relax.

Just 7.6 feet long and 47 inches wide, the Nissan is a foot shorter and 1.5-feet skinnier than a Smart ForTwo; at roughly 1,000 pounds, its curb weight is about half that of the Smart, too, including a 6.1 kilowatt-hour battery that provides about 40 miles of driving range. But whereas the Smart is legal on any road, including freeways, the Nissan is classified as a Neighborhood Electric Vehicle, strictly limited to a 25-mph top speed and roads with a maximum 35-mph speed limit. Think retirement communities or corporate campuses, though automakers and mobility providers are increasingly testing viability in congested urban areas.

Skeptics may suggest buying a scooter or motorcycle instead, especially considering the Renault’s €7,000 price (just under $8,000). But Josh Westerhold, senior manager at the Nissan Future Lab in San Francisco, says that many drivers are nervous and uncomfortable on two wheels. The Nissan also provides cover in foul weather, and room, if barely, for two occupants—or a driver and a lockable rear cargo area in an optional version.

“There’s a ton of interest in these small cars,” Westerhold says, for their efficiency, electric propulsion and petite carbon footprint. Where regulations permit, three NMMC’s can park head-in within a single street parking space.

Companies from Nissan to Ford to BMW have been declaring their future as mobility providers, rather than traditional carmakers. Short-range electric vehicles could play a role in plans for car and ride sharing, possibly in partnership with the Ubers and Lyfts that are carving out lucrative space in cities. As part of Nissan’s research, it has ten New Mobility Concepts available for rent in San Francisco for just $6 per half hour, recently marked down from $8 to spur more demand.

A young woman strides up to the cutie-pie Nissan, so I ask: Could you see yourself in a car like this? But not a guy, right?

“I think a man would look hot in this,” says Yulia Laricheva, with no trace of sarcasm. “He’s someone considerate, trying to save energy and space.”

Laricheva, I should add, is co-founder of a crowd sourcing company, lives in San Francisco and drove a BMW i3 electric car. But the pep talk is welcome: I hop aboard, hum onto 33rd Street, and begin weaving around idling, fuel-frittering taxis. Traffic eventually parts, and I have a clear shot down 8th Avenue. I floor the Nissan, which tops out at precisely 25 mph. And I actually lead the lazy pack for four blocks before Times Square traffic shuts me down again. A bicyclist blows past, ignoring the stop light and an indifferent New York City cop. Welcome to the future.