California is getting hammered. Hammer back in—what else?—a Chevy Tahoe. 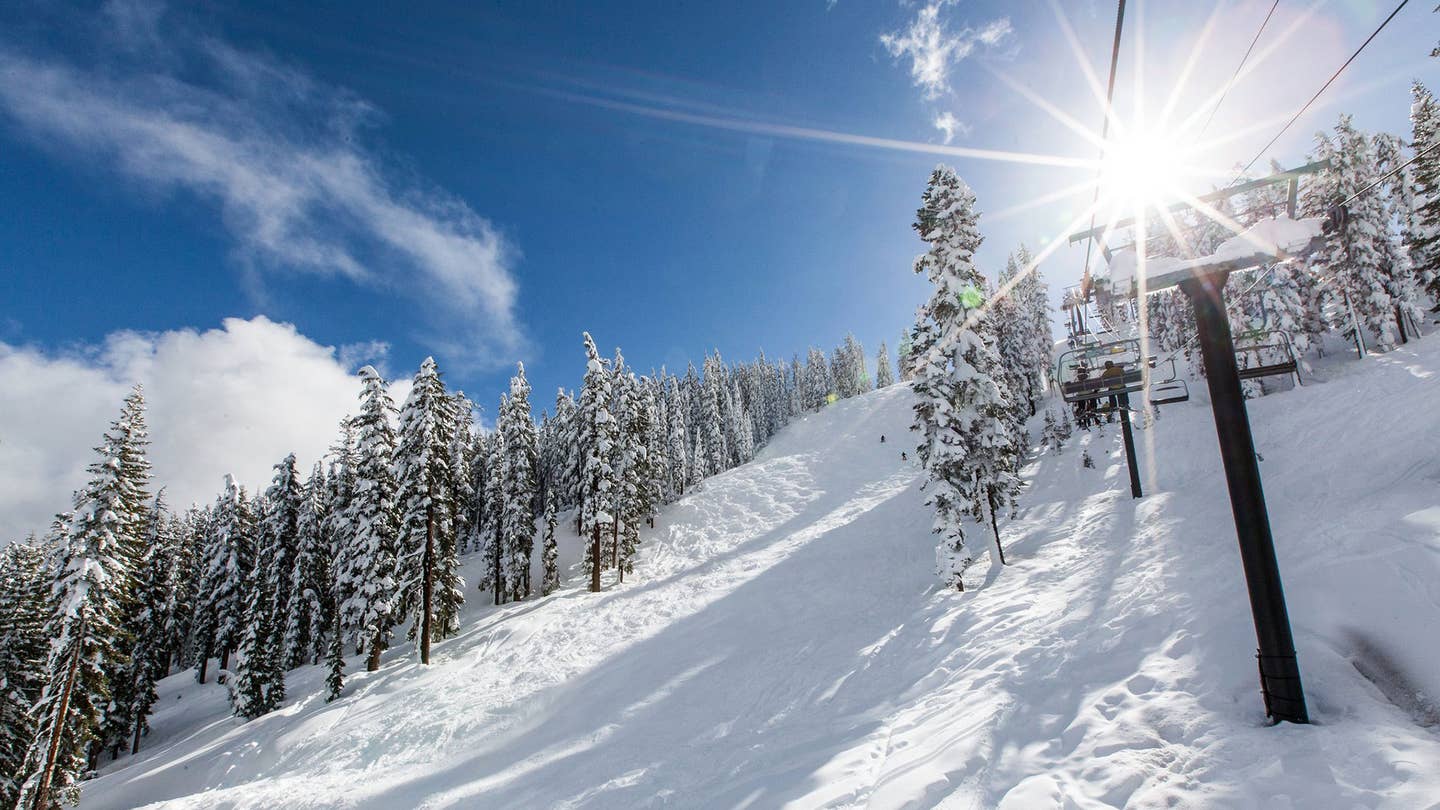 It was a Friday before sunrise, and all over northern California, skiers and snowboarders were climbing out of their beds with hearts pounding. Weather reports depicted thick sheets of snow above the towering northern Sierras. For years, California skiers had suffered through a historic drought. The weather geeks had been predicting an El Niño year for 2015-16, and finally, it seemed the little fucker had shown up.

Only one problem: The iced-over roads were murderous. To get to the lifts, one had to drive over Donner Pass, named for the infamous 19th-century Donner Party that was forced to eat one another to stave off starvation. Only the brave (i.e., morons) would attempt to motor these sketchy thoroughfares on this morning. What I needed was a vehicle that could man up to the task. Luckily, I had one: a 2016 Chevrolet Tahoe LTZ. It was painted an appropriate Summit White.

My house is at the base of the Sierra foothills, and I set out before sunrise for the hour drive, about 6,800 feet in elevation up I-80 to my local mountain: Sugar Bowl, in Tahoe National Forest. In the formidable lineup of General Motors SUVs, the Tahoe is like an offensive lineman: full-size and muscular, and yet, not as obese as the Suburban, which feels so large that it could trigger an avalanche (no, not that kind). The Tahoe’s interior was as prim as it should be for a vehicle stickering for around $65k (for the LTZ version; base starts at about $46k): plenty of room for ski gear for two, 10-speaker Bose Surround Sound, satellite radio tuned to Classic Vinyl.

Within minutes of cruising up in elevation, we were in winter wonderland, the sun just rising. I turned a knob to switch from rear-wheel to four-wheel drive—a $3,000 option—on the go, and hammered the 5.3-liter V8. For a truck weighing nearly 5,700 lbs, the Tahoe charged the mountain like a three-ton lynx. New for this gen Tahoe is electric power steering; you sense that you could direct the hulk with a pinkie finger.

The further we ventured, the greater the conditions’ deterioration. Dented cars littered ditches along the highway, but we thundered on. We passed a checkpoint set up by the California Highway Patrol, where two-wheel-drive cars and all semis were required to don chains. The cops snarled as I winked and motored past in four-wheel drive.

At one point, I got stuck behind a butt-picker: an 18-wheeler moving at a snail’s pace. To pass, I’d have to veer out of the only pseudo-paved lane into the snow, passing the big rig at imprudent speed amid heavy accumulation. On one side, a cliff. On the other, the big rig. This was the Tahoe’s big test. Would I lose control? Would the airbags deploy? I used the manumatic function to drop the auto tranny from sixth to fourth gear and the Tahoe burst threw the snow at speed, surefooted and with aplomb.

At the town of Soda Springs, I exited onto Donner Pass Road and cruised on the two-lane sheet of winding ice without concern, and made it to the lifts with the first bunch of skiers. What came next: chairway to heaven. And I have Chevrolet to thank.

As I write this, meteorologists are predicting a socked-in Sierra for the holidays. California is getting hammered. It also means you need to get to Tahoe this winter—and if you can swing it, in a Tahoe. Here’s a three-day road-trip ski weekend along Lake Tahoe’s North Shore that could very well qualify—if El Niño holds up his end of things—as the best damn ski weekend in the country. See you on top.

The Mountain: Sugar Bowl is the most underrated ski resort in California, with something for everybody: great hills for young kids, serious cliff-hucking for the fearless few, and rollicking cruisers in between. It’s also the first big mountain you see traveling east from the Bay Area, so it’s a good spot to hit first. It’s a locals’ mountain, all about the on-hill action—no winter fashion show here. Sugar Bowl first opened in 1939; Walt Disney was a major investor, thus one of the peaks is named Mount Disney, elevation 7,953 feet. Bonus: The bar at the village base just got remodeled, and it’s looking sharp. Order a Sugar Bowl pale ale, brewed by nearby Loomis Basin Brewery, another local fave.

Best Run: Silver Belt, a gully full of powder where you can’t see any lift, imparting a proper deep-backcountry feel.

Eat: After a round at Sugar Bowl’s village bar, motor to nearby Truckee—a mountain town to rival any. Try Pianeta for Italian, or Cottonwood for everything else—great alpine bar, solid ribeye.

Sleep: The Truckee Hotel, established in 1873, is right downtown, and straight out of the Wild West. Downstairs is a bar with live music, and upstairs, B&B-style rooms ranging from $79 to $229. For a quieter stay, Hotel Truckee Tahoe, just outside of town, is a reliable, no-frills Best Western.

The Mountain: Squaw Valley became a household name in 1960, when the Winter Olympics were held there. It won your writer’s heart in 1984, when the Squaw-filmed Hot Dog…The Movie premiered. (Think Animal House on skis.) The place is known for its high-browed clientele and Olympics-caliber resident athletes. Having skied all over Colorado, Utah, California, New Hampshire, Vermont, and even Pennsylvania and New Jersey, I’ve never found a mountain that could compare—when there’s snow, that is. Now, there is.

Best Run: There’s so much terrain, it’s hard to say, but I have a personal affection for the Granite Chief lift. It runs as slow as a three-legged dog up the mountain, but drops you at the top of a gorgeous bowl filled with what looks like powdered sugar. Head left off the lift on a weekday, and you’ve got this entire valley all to yourself.

Eat: Squaw Village has all kinds of good pubs, but for a more intimate—and local—feel, drive 11 miles south to Tahoe City. Personal favorites include the cheeseburger and Moose Drool Brown Ale at The Bridgetender and the martinis at Jake’s On the Lake which, true to its name, has remarkable views of Lake Tahoe on moonlit nights.

Stay: Book a not-too-expensive ski in/ski-out room with a communal hot tub at the base of the mountain, through SquawAlpine.com. Or, go big at the luxe Resort at Squaw Creek—spa treatments galore.

The Mountain: You have entered a new realm. The Village at Northstar is so quaint, you feel like you’re on a movie set. Make no mistake: This is more resort than ski. The mountain feels flatter than the other two mentioned here—dynamite for family vacations, not the chosen spot for serious hucksters. Which is why you hit Northstar last, when your legs are tired. Take a few runs, then down beers by an open fire at the base and ogle beautiful women from Europe and Japan, wearing diamonds so big you can ski off them. In the early evening, waiters walk around with trays of free s’mores.

Best run: Anything off the Martis Camp Express lift

Eat: The Chocolate Bar does more than what it says on the tin. An upscale bar menu (the C-Bar burger is solid) plus a dessert list with every kind of chocolate treat you could digest, are just the top-line recommendations. Mikuni rolls succulent sushi, the fish flown in daily. Just get your order in early, or you could wait for hours for your tuna roll.

Stay: The village has apartment-like hotel suites bookable through NorthStarCalifornia.com. But we recommend you end your weekend road trip in style at the Ritz, set right on the slopes—the swankiest address in all of Tahoe. A three-bedroom suite with a fireplace and balcony will run you $7,500 per night. Then again, you could spend that sum on an old Chevy Tahoe, and sleep in the back.