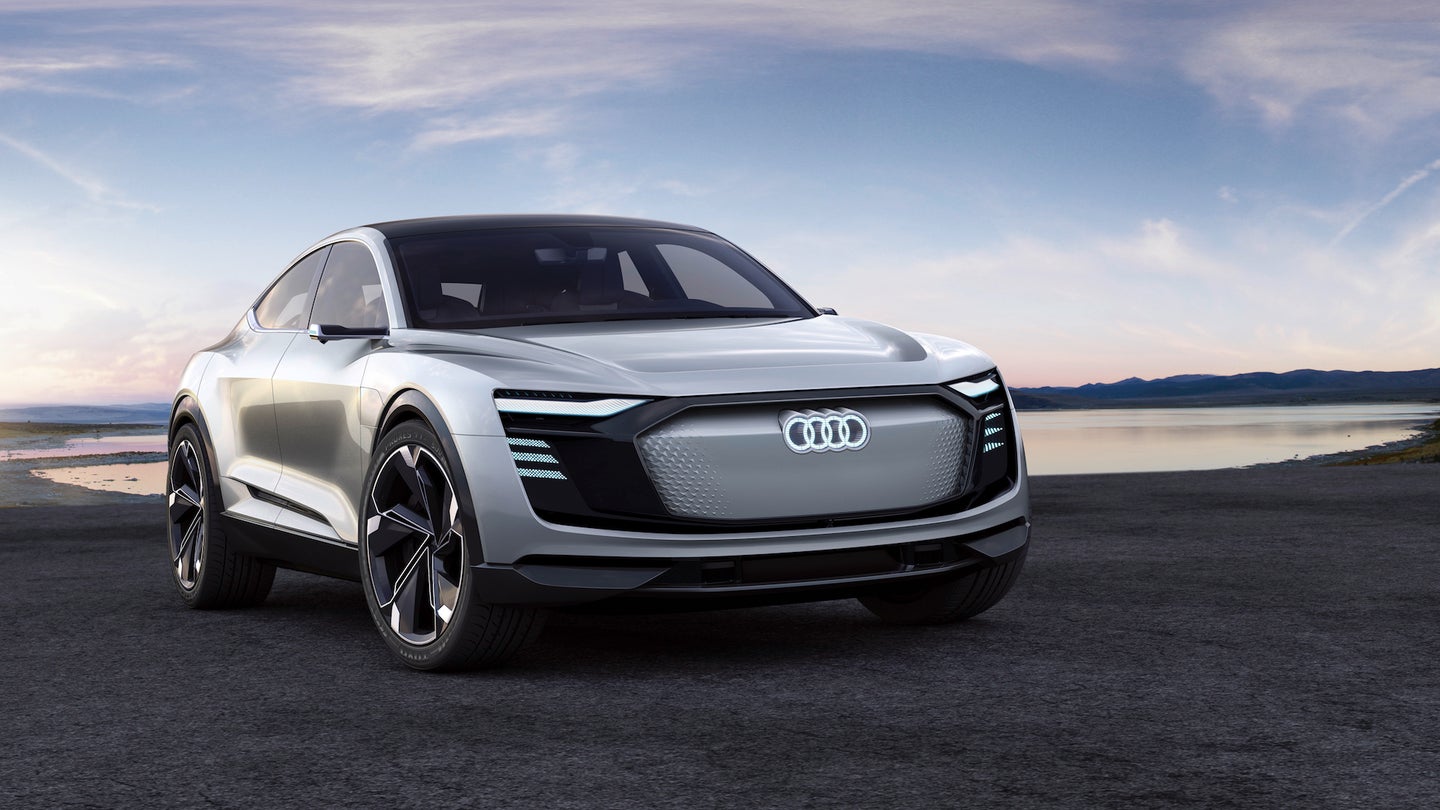 Audi is bringing another full-electric e-tron model, the Audi e-tron Sportback, to production in 2019 at its Brussels factory following the launch of the Audi e-tron electric SUV in 2018, the automaker announced in a press release Wednesday, and an electric supercar could also be on the way.

Audi is looking to continue its innovation efforts with new e-tron electric models. Though the automaker has toyed with them in the past, contemporary technology has proved for some setbacks that indicated a viable high-performance EV for the brand would be a few years out. Now though, we know that there are two new EVs—the 320-kilowatt e-tron Sportback and the e-tron electric SUV—that are fresh and ready to come to market. Both cars will be built at the automaker's Brussels facility.

At the Formula E race in Berlin earlier in June, Audi R&D head Peter Mertens also hinted at the possibility of an e-tron supercar being in the works.

“You can very well imagine that at some point we will have an electric supercar," Mertens said, according to Car & Driver. "The question is, ‘Would I like to make it happen sooner?’ and the answer is, ‘Yes, of course.’ It is part of our plan. We’re not going to talk about that today, but I can tell you that for a brand like Audi, a supercar is always interesting, and it’s a segment in which we have been playing, we have been a very serious player.”

The thought of hybrid S and RS variants of certain models could also be very appealing to the enthusiast market. As the marque has proven before, Audi is particularly good at taking a relatively new technology and turning it into a usable source for both more performance and usability.

The R8 e-tron was a thing a few years ago, but it sold in very limited numbers. Sales only ran for 19 months, making it a sort of one-off marvel that few got to experience. As opposed to typical Audi performance models, it was strictly rear-wheel drive, a trend that we don't expect to continue in the future.

One way to give electric supercars an advantage over the usual gas-powered models would be a high output 800-volt system. When driven to all four wheels, that kind of power would make for rapid acceleration and improved top end performance, an area which is still a setback for go-fast EVs like the Tesla Model S P100D.

“800-volt puts a significant extra cost on the bill. We need to evaluate whether customers will be prepared to pay that,” Mertens said. “In segments like super sports cars, it will be yes, no doubt about it.”

We'll more than likely see PHEVs sneak their way into the Audi range before full-electric models. That would make the market transition easier for both the company and its demographic.

“It could definitely be a part,” Mertens said. “We believe in that technology, specifically in regard to performance. Is plug-in technology a bridge? Yes, it is, but it’s also a fantastic technology for really delivering performance.”

Though Mertens plans on keeping things under wraps for awhile, we can only imagine that some of these hotted-up electrically assisted cars will be showing their face sooner rather than later.