How 12 Potential Formula E Champions Lost the Title in Berlin

Attrition ultimately chose the winner in a crash-filled season finale. 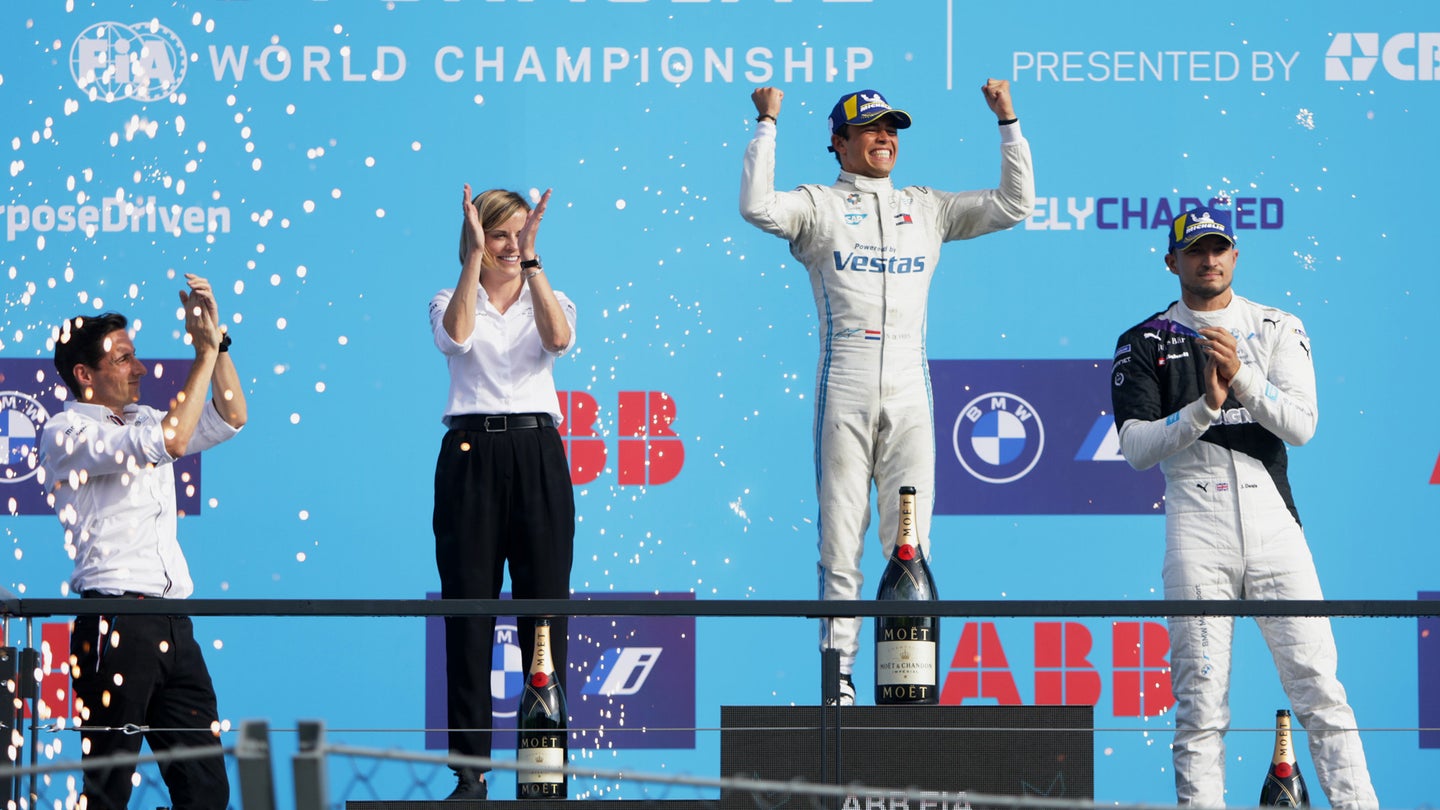 Formula E is a ridiculously competitive racing series. This year more than ever, it’s come down to the tiniest of margins and the most gigantic swings in the championship that saw the Berlin double-header season finale commence with 18 drivers in contention for the championship.

At the end of any season, however, there can only be one winner. Two, maybe, if the teams and drivers’ champions are from separate garages, as has happened three out of seven times in Formula E’s short history. Still, the way things played out in the Berlin races was strange by anyone’s standards.

In motorsport, especially FIA single-seaters, it shouldn’t be surprising that Mercedes-Benz won both championships. Except that at almost every point in the weekend, up until the final laps, it looked like it wasn't going to.

There were plenty of reasons for that, from funky double-header races to qualifying format issues and the usual unpredictable weather. Formula E's results aren't as random as they might look, however, if you follow the points scored across the season.

In Berlin, of the 18 drivers in contention at the start of Saturday, 14 were still in the running by the start of Sunday. A near-total failure by the frontrunners to score points had promoted Jake Dennis into a close third in the title, and De Vries still held onto the lead by three points.

What actually happened was an extraordinary collision on the grid, Evans' car going into default mode (electric cars can't stall but that's essentially the same) and, unable to move, getting plowed by second-place-in-the-title Edoardo Mortara. Both were out before they even crossed the starting line.

A red flag period after Evans and Mortara's collision was initially thought to be ending but an additional need to move ambulance vehicles around meant cars lined up at the pit exit for minutes. No matter what the propulsion, racing cars really aren't meant to idle unattended, as Dennis confirmed after the race that he felt something was wrong—a strange noise coming from the MGU.

At the restart, something went wrong in the powertrain and he was unable to brake properly—regeneration accounts for about 80 percent of the force of braking in Formula E, so a functional powertrain is pretty essential even to stop. Dennis hit the wall and, suddenly, De Vries didn't have so many title rivals left.

Having started the race 13th place with both Dennis and Evans ahead of him, De Vries fought his way up to fourth at one point. It looked completely reckless for a man who didn't need to do much to take the title, but with Bird having also made it into the points, Mercedes needed to secure a good finish for De Vries to take the teams' title from Jaguar.

In the end, things came down to on-track action—as they should.

Afterward, De Vries absolutely acknowledged it: "First of all I’d like to say I know I was very fortunate today, with everything that happened. Of course, I feel sorry for what happened with Mitch and Edo, they deserved to fight to the end."

"It was a very tight championship all the way through, a lot of ups and downs and everyone was really in the same boat, that’s why we went to today with everyone basically being in contention for the championship and I just feel very, very grateful that fortune has chosen us."

De Vries took the drivers' title, Mortara second (but was replaced by his team principal Susie Wolff on the podium as he was in hospital being checked for spinal fractures) and Dennis secured third. Mercedes took the teams' championship. In a way, you might say it's the same as you'd expect from the start of the season when De Vries took the first win in dominant style and the Mercedes-powered cars seemed clearly at an advantage. It's just harder to explain what happened along the way to get there.

Here’s how the wide-open title fight came to be.