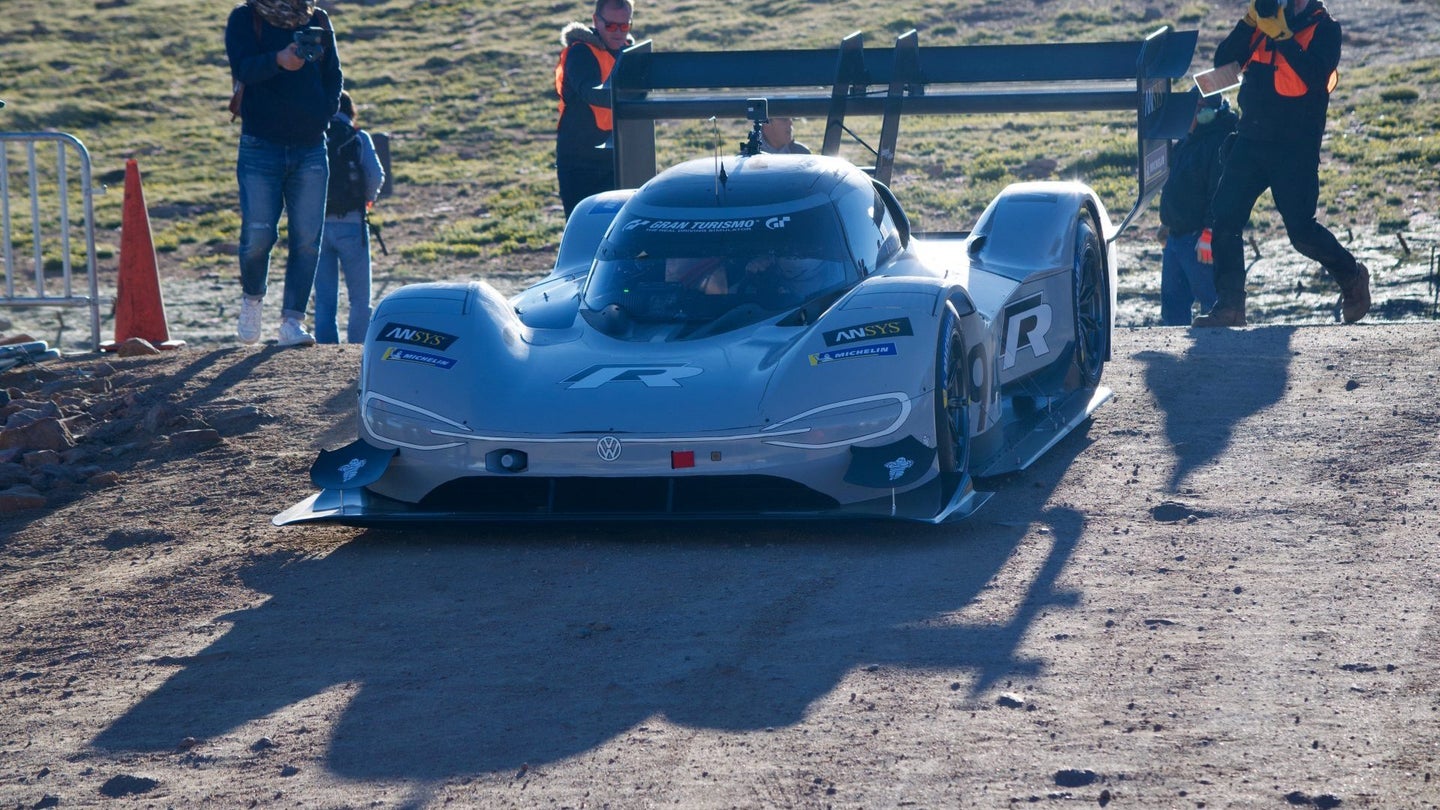 Volkswagen motorsport director Sven Smeets has announced the automaker will not return to compete in the 2019 Pikes Peak International Hill Climb with an improved version of its I.D. R electric prototype race car.

"It is decided we will not go back to Pikes Peak," Smeets told Autosport. He explained that VW's marketing department sees a return to Pikes Peak as a high-expense endeavor with high risk and little reward. "We spoke to our marketing and communications [departments], and in one way, I fully understand about chasing your own record [sic]: you go there with an improved car, with Romain [Dumas], and then it rains, and you get nothing."

Smeets left open the possibility that VW could return to Pikes Peak in the future if it had more to compete with than itself.

"We have the record, so now it's up to somebody to take it away," Smeets added. "We are very, very proud of this record, so as soon as somebody challenges [it] and maybe takes it away, you can be sure that I think we would have support around here to go and take it back."

I.D. R program personnel told The Drive at Pikes Peak in June that there was plenty left on the table for improvements to the car—active aerodynamics, brake vectoring, drag reduction—but that there was no time to add these in the program's barely eight-month-long development cycle. Engineering teams in charge of the car had ideas for improvements, but their work would depend on whether VW's marketing arm saw the value in refining the car. As it turns out, the PR division is considering an upgrade program.

"We are working on a few possible programmes that we could do with this car and I think very soon we can fix them. We are in the final stages of a decision yes or no, but it looks like we will do something similar next year," concluded Smeets. "We want to continue in this new technology. There is such a rapid evolution in terms of electric motors."

Volkswagen developed the I.D. R to establish its I.D. electric model designation through the crucible of motorsport and used the car to obliterate two course records at the 2018 Pikes Peak International Hill Climb: the electric record by almost a minute, and the overall record by 16 seconds. Romain Dumas would eventually use the I.D. R to reset the electric record at the far-shorter Goodwood Hill Climb, blitzing the previous record time by almost 4.3 seconds, as you can see in the video below.

The Drive contacted Volkswagen for information on the future of the I.D. R program, and the company confirmed the possibility of returning to Goodwood in the hopes of seizing the overall course record.

"At the moment, we are talking about future events which might happen with the I.D. R Pikes Peak, such as returning to [the] Goodwood Festival of Speed to break the overall record, for instance, or similar challenges," a company spokesperson told The Drive, quoting an individual part of Volkswagen's motorsport program. "For this, the car would probably need new, or modified aerodynamics, et cetera."