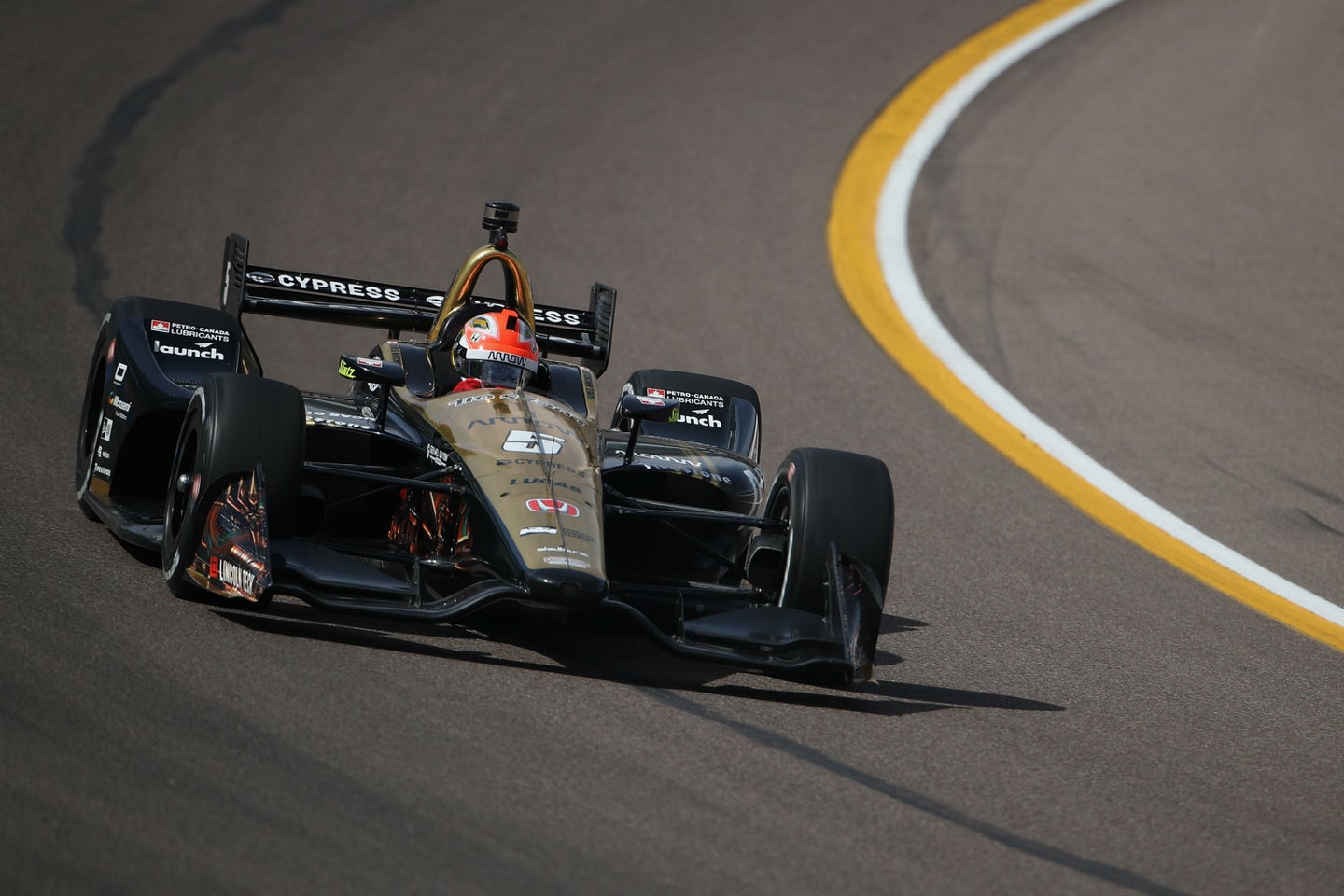 The driver who failed to qualify for May's Indianapolis 500 was able to manage the comeback around the 7/8-mile Iowa Speedway, defeating Newgarden who pitted under a late-race caution that was never lifted before the checkered flag flew. As a result, the reigning champion dropped to P4 behind Takuma Sato, Spencer Pigot, and the race winner.

Pole sitter Will Power showed his newfound oval circuit strength early on but soon surrendered the lead to his teammate Newgarden on Lap 24. Meanwhile, the ever-persistent Andretti Autosport cars were tangoing in the midfield with the hard-charging Ryan Hunter-Reay climbing to third. Hinchcliffe's Schmidt Peterson partner Robert Wickens was duking it out with Ganassi's Ed Jones and Zach Veach while the frontrunners were pacing the field.

Position switches came by the spoonful through the first stint with Jones being the first to pit on Lap 75. He was soon followed by others in the top half of the field including Hunter-Reay, Veach, and Hinchcliffe with Newgarden and Alexander Rossi stopping on Lap 80. The Penske driver came away clean but Rossi's No. 27 NAPA Racing Honda stalled in attempt to exit the box, costing him a full lap around the short oval.

Newgarden rejoined 4.5 seconds clear of Hinchcliffe on his way to leading a best-in-race 229 laps. The pair ran one-two into the triple digits as the contest reached its halfway point on Lap 150.

Championship leader Scott Dixon concurrently struggled to find speed as he had fallen a lap down early on, mixing things up as part of the lapped traffic.

Around this point, Pigot became a factor as he fought hard for second place with Hinch. With others falling off the lead lap, the Ed Carpenter Racing driver impressed as he maintained his presence among the veterans. He put on what many would consider to be the best battle of the show with Sato for podium position, eventually claiming a second place finish at race's end—the best of his career.

In a race which was easily won and lost in the pits, strategy showed itself as the decider for the fastest drivers of the day. Ryan Hunter-Reay was a prime example of this as he made an extra, unplanned stop, forcing him to relinquish his hard-earned seventh place prior to retiring 20 laps early.

Focus shifted to the front of the pack as the lap count quickly ran through the 200s. The quickest cars on-track were hovering steadily around the 180 mile per hour average mark.

After a scurry to pit lane near Lap 222, the field was starting to ignore caution in favor of risk and reward. Close to 30 laps went by while Wickens was climbing the ladder closer to his teammate, moving as high as third. However, it was the experienced and poised Hinchcliffe who gained the edge as Ed Carpenter slid into Turn 2 with just seven laps to go, causing the second caution of the day.

Yellow flags were flown and the field bunched up, eliminating gaps throughout. Once pitlane was opened, a slew of drivers including Newgarden, Penske's Simon Pagenaud, Graham Rahal, and Wickens entered their respective boxes as a gamble for fresh tires. Ultimately, this was the most costly decision of the race as the caution period was never lifted before the checkered flag, leaving Hinchcliffe—who stayed out while the others pitted—to win.

“For everybody at Schmidt-Peterson Motorsports and Arrow Electronics, this is such a good feeling after what happened in May,” Hinchcliffe told NBC Sports. “We knew we had it in us—didn’t qualify great but we had a good car. The first stint was great; the second we made a change and went too far, then went a little too far the other way the next stop; but that last stop the thing was a rocket ship. Great battle today with Spencer and Josef at the end. The guys were great in the pits, Honda power back on top—heading to Toronto like this, I’m so stoked.”