Formula 1's 'Holy Trinity' Leads 2018 Winter Testing, But Should It Be Nervous?

The collective monarchy with Mercedes at its head could have some eerily close competition in 2018. 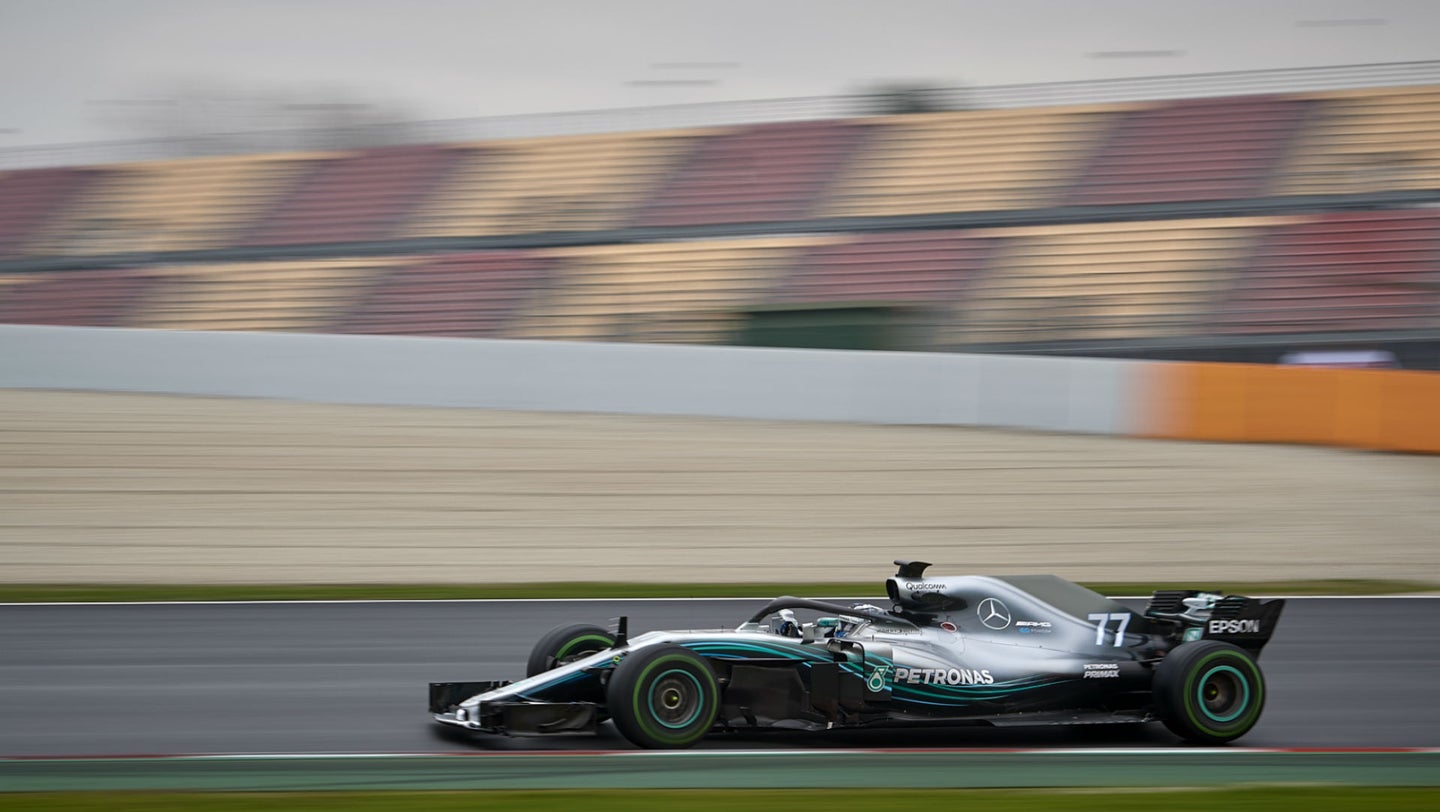 Snow and blustering winter climates hampered Formula 1's initial pre-season testing this week in Barcelona but even then, teams displayed their potential form for the looming 21-race calendar. The expected favorites performed how many figured they would, and several new-look outfits exceeded their forecasted results. With the third day of action at Catalunya essentially called-off due to snow, crews were left with relatively little time to get things sorted before the next rounds of testing on March 6-9.

Those who fall within the sport's so-called "Holy Trinity"—Mercedes, Ferrari, and Red Bull—were effectively the fastest from day to day as anticipated. They each traded blows with RB's Ricciardo taking day one, Ferrari and Vettel commandeering day two, and Hamilton's Mercedes W09 claiming the title of fastest during the third full round of running. That being said, Formula 1's perennial top dogs gave way to others in the field as less-than-ideal conditions prompted slower times and increasingly closer battles.

As reigning Constructors' Champions, the Silver Arrows are seeking a fifth consecutive title that would permanently fuse its name to success in F1's hybrid era. The Brackley-based team goes into 2018 with two of the series' most triumphant drivers, four-time champ Lewis Hamilton and the blossoming Valtteri Bottas, and what few would argue against as the best car on the grid. Hamilton was the first to speak up on the new W09's performance, one which he considers to be admittedly faster than the already-dominant W08 from last season.

He told reporters on Thursday that Mercedes has taken a step forward with this freshly-christened racer. "Naturally it's an evolution of last year's car and we've got better tires and here we've got a new [Barcelona track] surface, so that might make things seem even better than it really is. But so far it's good. I was really happy to get out today, to be honest. You know I don't like testing but today I was really keen to get out because we hadn't had many laps."

Lewis added: "It definitely does feel like a better car compared to last year's car, so that's a positive."

Conclusively, Hamilton was able to notch a fastest lap of 1:19.333 which was three-tenths ahead of Vettel's quickest time in the Ferrari despite having worn harder tires for the outing. This bodes well for the AMG team's chances next season, but consistency and unspoiled passion will have to make way in order to overcome a hungry effort from Maranello.

Although the boys in red were unable to catch up with their rivals from the U.K. this week, Vettel and Raikkonen set the Italian manufacturer up for what looks like an equally competitive 2018 compared to last year. In fact, Vettel has a gut feeling that this season we'll be seeing more of the same out of him and his ever-fruitful adversary Lewis Hamilton. This round, though, he hopes to be the one on top come time for the season finale in Japan.

"I think Mercedes is the favorite going into this year, so if we can be close—very close—closer than last year then that would be great," explained Vettel. "But it's a long year. Now it's March and we keep going to the end of November. So it's a long time from here to the end of the season."

Vettel was a strong contender in the first half of 2017, eventually winning five races but falling short of overall glory. Ferrari will certainly be aiming for consistency as Sergio Marchionne overlooks from the brand's headquarters in his final year at the helm.

Ferrari and Mercedes were the first teams to eclipse the 80-second mark around Catalunya, though they were promptly joined by McLaren's Stoffel Vandoorne on the final day. The unusually cold track temps at Barcelona meant that Medium tires were likely an advantage over the Hypersofts, somewhat offsetting the difference between Hamilton, Vettel, and the rest of the top five.

Aside from the ever-present challenge up top for the Constructors' Title, Red Bull will also be preoccupied with internal endeavors including Max Verstappen and Daniel Ricciardo this season. That intra-team competition could charge the Milton Keynes team to success, however, as both drivers look to outperform one another for a solid spot with the team beyond 2018. It's understood that Red Bull has mostly chosen Verstappen to build its crew around, but Ricciardo surely won't go quietly as he hinted at on day one of testing.

In total, Ricciardo notched the quickest time for Red Bull over the four-day span. While he was ultimately bested by both Mercedes, Vettel, and Vandoorne, he neared the one-minute twenty-second mark before anyone else had early on.

"It's nice to see yourself at the top of the timesheets but in two-degree temperatures, you really can't learn anything," said Ricciardo after day one. "It was still a good day and we got over 100 laps done and, I think, one run of 35 laps. So reliability was solid and hats off to everyone for that."

It's a bit harsh to place such a label on the remainder of the field, especially seeing as that group includes star drivers like Fernando Alonso and key engineers such as Paddy Lowe at Williams and Cyril Abiteboul at Renault. McLaren made the most obvious headway in the sub-freezing conditions, overcoming Alonso's big day one crash for the third-best time of the week. Renault's refreshed one-two of Sainz and Hulkenberg then performed well, and the surprise come-from-behind showing of Toro Rosso-Honda was massively respectable.

While relatively little can be taken away from the downtrodden testing runs due to weather, the coming week's gathering could be more fruitful. Look for those on the outside to squeeze their way into the top handful, and more than anything, anticipate a step-up from the likes of Mercedes, Ferrari, and Red Bull as they hope to take advantage of prime conditions ahead of the season-opener in Melbourne.