Ferrari feared the worst as having to change gearboxes would have meant a grid-spot penalty in Japan. 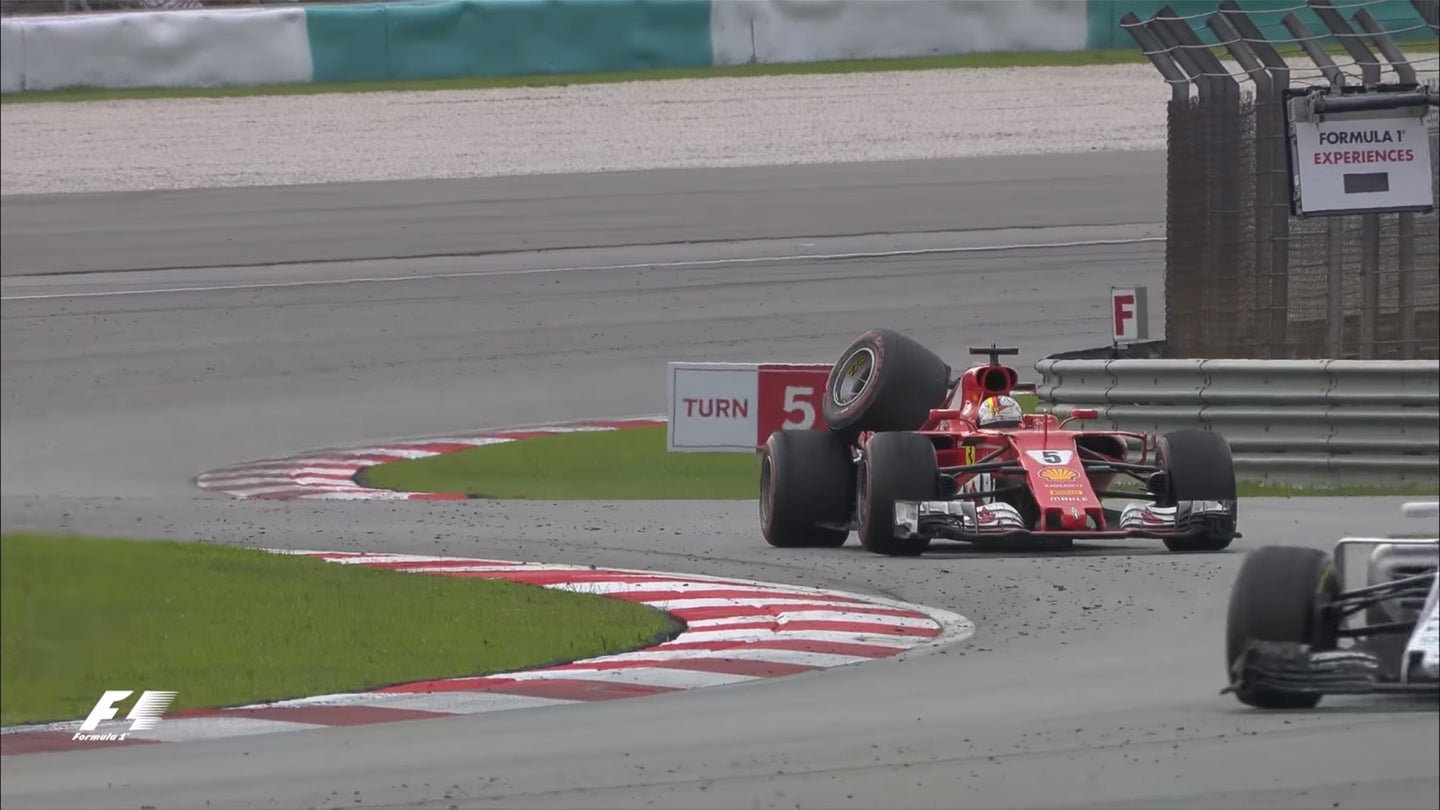 Sebastian Vettel's 2017 championship hopes are still alive. Ferrari announced that his car's gearbox was undamaged in the post-race accident he had at the Malaysian Grand Prix with the Williams of Lance Stroll. After the crash, Ferrari had feared that gearbox, which was brand new for the Malaysia Grand Prix, would be unusable for the rest of the season.

The collision with Stroll ripped the left rear wheel off of the car. Ferrari's concern centered around the driveshaft and how it connects to the gearbox. Formula 1 cars bump wheels all the time and nothing happens. For whatever reason, the exact angle of this impact did extensive damage to the Vettel's Ferrari.

Gearboxes, per Formula 1 regulations, are to last for six races distances, which includes Practice Three, qualifying, and the race itself. This gearbox was to last from Malaysia through the rest of the season. Changing the gearbox would have caused Vettel to take a five grid-spot penalty in Japan. Ferrari flew the gearbox back to its factory in Maranello to examine it and determined that it was good to go.

The race stewards can make an exception to the gearbox rule if the car fails to finish a race and the issue is deemed to be beyond the control of the team. Ferrari had preemptively asked for an exception if the gearbox was found to be damaged. The request was denied. Vettel did, in fact, finish the race so that pretty much put an end to the issue right there. As far as the accident goes, the stewards determined that "no further action" would be taken against Stroll or Vettel. That is the nice way of saying they were both equally at fault, deal with it.

After having scored no points in Singapore and salvaging a fourth place from last in Malaysia, Vettel and Ferrari would have been less than happy to take a gearbox penalty in Japan. Of course, the real test will be once the gearbox is fitted to the car and starts running in P3 on Saturday. With Vettel's pace, one might think why not just change the gearbox to be safe. He'll probably be able to make those five spots up in a few laps, if not right at the start.

If it were earlier in the season, that is probably exactly what Ferrari would have done. But there are only five races left and Vettel needs every point he can get.

Vettel sits 34 points behind Lewis Hamilton in the Driver's Championship going into Japan this weekend. It's not an insurmountable lead, but with both drivers in top form, Vettel needs wins to stay in the fight. Vettel needs to outscore Hamilton an average of seven points in each of the five remaining races to win the title.

It wouldn't be surprising if Ferrari is waiting to see how qualifying shakes out before making a final decision on the gearbox. Based on everyone's pace and qualifying position, there might be a strategic opportunity to change the gearbox before the race. The goal is to be in front of Hamilton or to be able to pass him during the race. If Mercedes has a bad qualifying or some sort of problem with Hamilton's car, Ferrari could change the gearbox without too much risk.

There are several other variables that might factor into Ferrari's decision if they want to put a new gearbox on Vettel's car. Where Kimi Raikkonen qualifies would be the biggest one. If Vettel takes pole but then starts sixth after the penalty, Ferrari would need Kimi out front to help Vettel get by Hamilton.

Raikkonen has no chance of winning the driver's title this year. Likewise, Ferrari's second place behind Mercedes in the Constructor's Championship is a lock at this point. This could be where Kimi earns his pay by helping Vettel get in front of Hamilton should Ferrari change Vettel's gearbox. Raikkonen will need to be Vettel's wingman from here on out. If Raikkonen has a lackluster qualifying, that plan goes right out the window.

We'll see what Ferrari does soon enough as the Japanese Grand Prix weekend gets underway. Practice One is at 9 p.m. ET tonight.