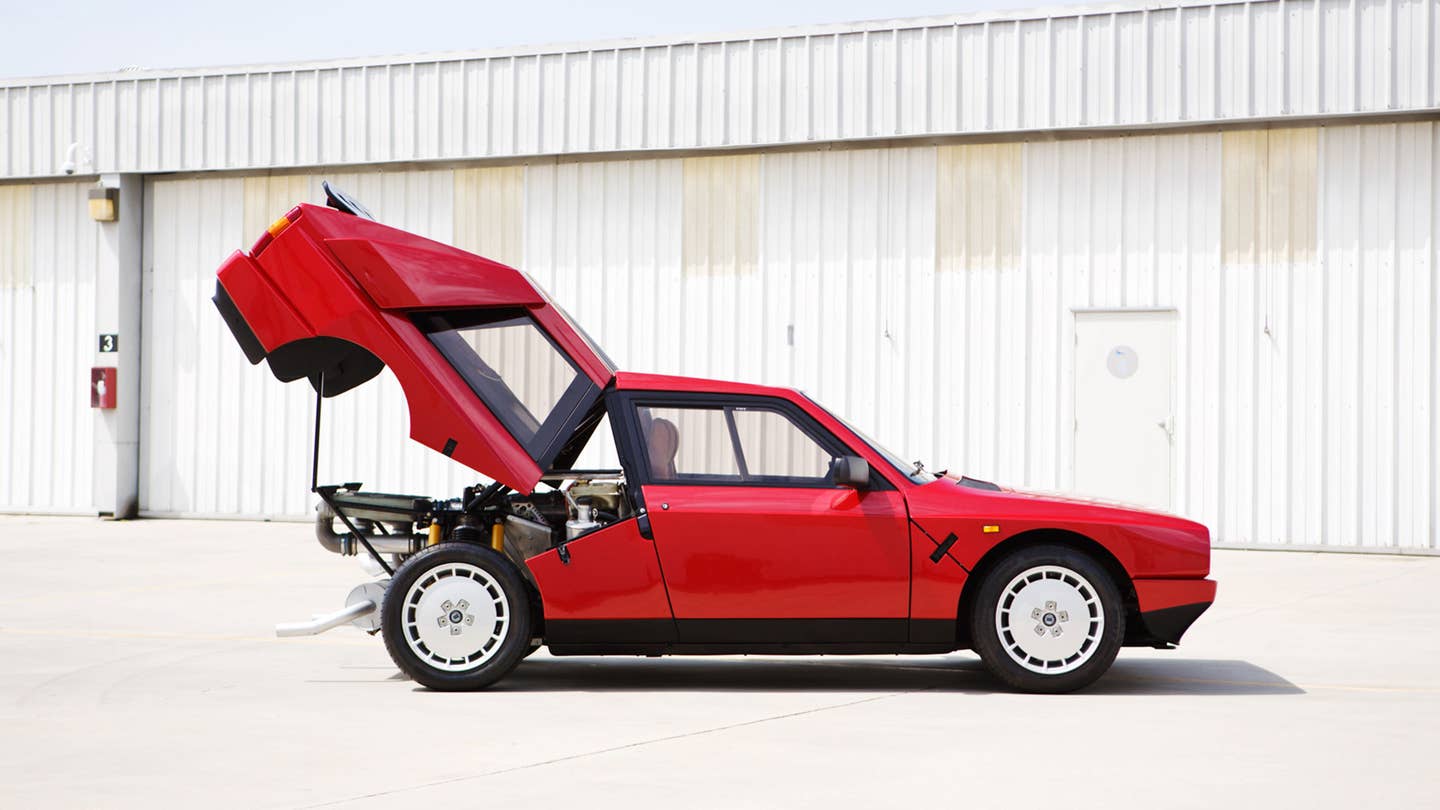 If you were at all automotively aware in the Eighties, you will likely recall with clenched teeth (and bowels) the years in the middle of that decade when the brazen and treacherous Group B racing cars exploded—often literally—onto the scene. Lightened, stiffened, jacked-up, and boosted far beyond the realm of the rational, these vehicles roared into existence on a wail of sucking intakes, and flamed out shortly thereafter following a surfeit of high-profile wrecks.

“Scary dangerous is the way they were,” recalls automotive historian Ken Gross. “And when they rallied those cars, spectators were crowded on the road, guys were sideways constantly, and the barriers were trees and stone walls. Inevitably, they had fatalities—spectator fatalities, and driver and navigator fatalities. So in a very short time they realized they created a monster, and they dialed it back.”

Unlike other racing series, which required cars to be based on carefully proscribed templates or mass-production models, in order to compete in Group B, manufacturers had to produce just 200 road-going, street-legal versions. These vehicles, known as Homologation Cars, were tours de force of technology, speed, sophistication (and hubris) and were among the most desirable and terrifying vehicles on the road.

Exclusive auction-house owner David Gooding, at his flagship Pebble Beach auction, will sell a trio of the most remarkable and sought-after Group B Homologation cars: a 1985 Lancia Delta S4, a 1985 Ferrari 288 GTO, and a 1988 Porsche 959 Komfort. The three are estimated to bring in between $4 million and $5 million, a total that’s likely to climb much higher if bidding gets fierce.

“Enthusiasts with money always want the rarest, the fastest, the best looking vehicles,” Gross says. “And these cars tick all of those boxes.”

Interest in, and prices for, iconic vehicles from the Eighties has been especially strong recently, as people who came of age during that time period—now entering their peak earning years—seek to buy their heroes. This is true for vehicles that were simply outrageous, though not particularly rewarding to drive, like a Delorean DMC-12 or Lamborghini Countach 5000S. But it’s even more apropos for cars from engineering-centric marques like Ferrari, Porsche, and Lancia, which explains in part why the value of top-notch examples of vehicles like the 911, 308/328, and Delta Integrale continue to command top dollar.

The Group B Homologation cars exist in a realm above even those cars. They are ideal exemplars of the perfect collectible vehicles: the 959 is peak 911, the 288 GTO is peak 328, the S4 is peak Delta Integrale. They’re the product of not just these manufacturers’ fantasies, like a concept car is, but their first successful holistic consumer-facing integration of technologies like turbocharging, adjustable suspensions, all-wheel-drive, and structural alloys and composites.

“Time and context always give you the ability to look back and really put things into perspective and realize how important and cool and special these cars were,” David Gooding tells me. “ They were significant in their time, but they gain even more significance with time, when you look back and see the impact that they had. I mean, the whole supercar craze has its origins in cars like the 288 GTO and the 959. They’re still impressive cars. Groundbreaking technologically. Mind-blowing performance, still.”

David gave me the exclusive opportunity to ride, toy with, or just sit around in some of these cars, and though the seat time was brief and the rally stages paved and relatively devoid of obstacles, I can attest to their astounding exceptionalism. They exist, like the first atom bombs, in something of an uncanny technological valley, combining the most eminent achievements of physical science with a bare modicum of computational ability, an utter dearth of safety features, and the addictive quality of absolute power. They are pure noise, muscularity, and danger. It's amazing that any of these cars, or their drivers, survived.

Perhaps their longevity can attributed to their being cared for in a manner that contrasts directly with the “driven hard and put away wet” mantra. The vehicles Gooding is selling are all original, extremely low-mileage cars with impeccable provenance. They are barely used. As it turns out, this is precisely how today’s younger collectors want them. As vehicles like these “modern classics” strain to achieve approval from the old guard in the collectible car world, the most pristine examples must break the barrier first.

But there is more to this fetish for purity than simply being a role model. Gooding notes that whereas collectors of older (prewar to Seventies) vehicles are likely to take their cars to events and vintage rallies, Eighties supercar collectors tend not to drive them at all “because low mileage is so important, and currently so much a part of the value.”

I posit that this is a generational issue. In an era that grants the quantifiable near deific status, and denigrates anything immeasurable as wishy-washy, it's no surprise that these buyers genuflect before the odometer and the service record, and ignore the “vague” emotional satisfaction that comes from actually driving.

“I wish they could free themselves of that burden,” Gooding says. “It’s very akin to collecting wine that you don’t drink. Yeah, it’s a low mileage car, but you should enjoy it too. If you put a few hundred miles on it, or you put five hundred miles on it a year, great. And if they’re a couple extra paint-dings that you put on it, so be it. It’s not a problem. These cars should be driven. It’s actually good for them to be driven, with measure. It’s good for the systems, and that’s part of it. Part of owning the cars is using them.”

He adds. “You have to enjoy them, experience them. It’s a moment in time and it can’t be measured, but it’s a wonderful memory, and that goes a lot longer than some kind of digital reading on a computer screen.”