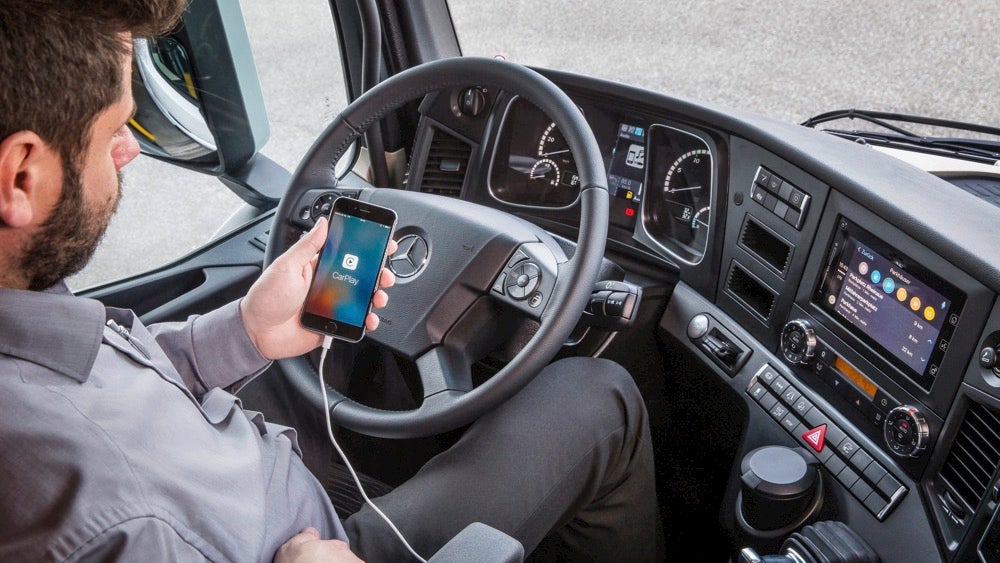 Apple CarPlay continues to slowly proliferate across the ranks of new passenger cars, but what about big commercial trucks? Well, truckers, worry no longer: Mercedes-Benz now claims to be the first manufacturer to offer CarPlay in big rigs. The smartphone-connectivity feature is being added to the Actros, Antos, and Arocs trucks in Europe. Android users get MirrorLink, instead of the brand-specific Android Auto system usually paired with CarPlay in new vehicles.

CarPlay lets drivers access content from their smartphones using a vehicle's built-in infotainment controls, which (in theory) should be less distracting than actually picking up a phone. Some studies have argued that any activity other than simply paying attention to the road constitutes a significant distraction, though. But with so many cars offering some form of smartphone connectivity—from basic Bluetooth to elaborate manufacturer-specific infotainment systems—the genie has definitely been let out of the bottle.

But adding CarPlay to commercial trucks opens up some new questions. It's bad enough when someone in a regular car becomes distracted, but the motoring public might be even less at ease knowing that truckers have been given license to play with their phones while driving, even with a more streamlined interface like CarPlay. It's also unclear how trucking companies will think about this tech.

For now, those questions will only be addressed in overseas markets, as Mercedes does not sell the three CarPlay-equipped truck models in the U.S. The automaker offers CarPlay (and Android Auto) on some of its U.S. passenger cars, but not the entire lineup.