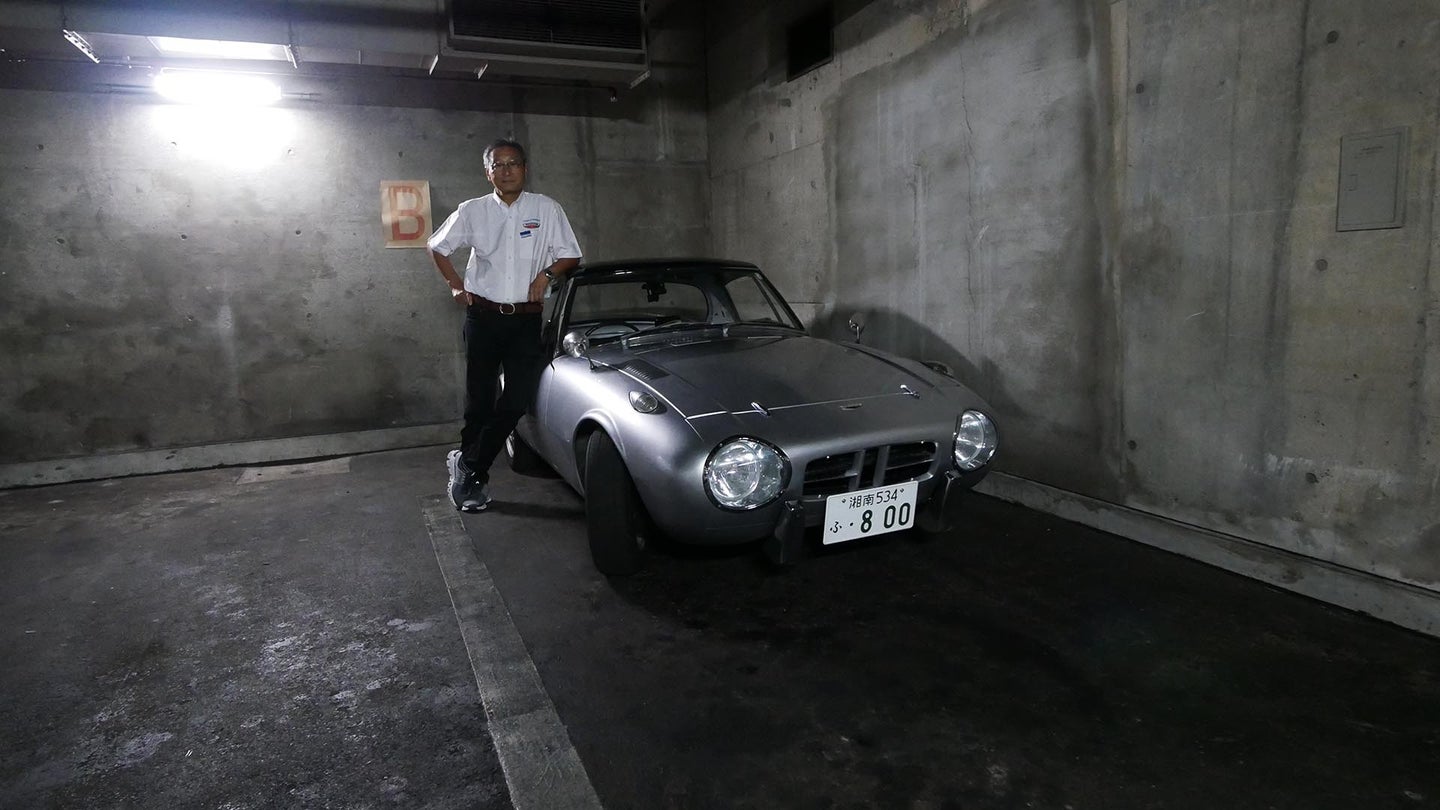 Getting into the car was surprisingly easier than getting out. “Maybe I give you a push,” says the dapper gentleman in the seat next to me, and with a mighty shove, I land on a hot sidewalk in downtown Tokyo. It’s all in the name of science, and to trace back the illustrious history of the low-slung sportscar I now successfully have been shoved out of.  With this, we interrupt our usual looking into future technology, and we investigate forward-looking technology of half a century ago.

How do 73 miles to the gallon grab you? “Yuck, Big Oil is pushing ICE again,” I hear the protest of recent electric converts and Tesla stockholders. Fair enough, how about an electric version of said car, developed at the turn of the century? Or a gas turbine version?

The car that sported all those powertrains is the Toyota Sport 800, or the “Yotahachi” as it is lovingly called in Japan, and by car-connoisseurs abroad. Japanese are abbreviation-addicts, and Yotahachi is short for “Toyota 8.”

The two-seater sports car was first shown at the 1962 Tokyo Motor Show, and it finally went on sale three years later. In the same year, Yasunari Sugiyama, the man who just pushed me out of the car, was a wide-eyed 15-year-old, and seeing the red Yotahachi at the Tokyo Motor Show was a career-changer for him. “I used to have been into planes, but the 800 changed my mind,” Sugi, as his abbreviation-addicted friends call him, tells me.

When the car-convert graduated a few years later, he put on a black suit and a white shirt like millions of newly-minted Japanese graduates, and interviewed at Toyota. They took him and sent him to boot camp. “It was six months in a dealership total, three months in sales, and three in service.”  To this day, the practice hasn’t changed much, but at least, the six months were shorted to three.

Sugi drove a car back then, a ratty old Toyota Publica which Sugi saved from the crusher. He paid 15,000 Japanese Yen for it, around $40 at the prevailing exchange rates back when, but a dollar bought much more, and a Yen bought much less in these days. The Publica was product of Japanese command-economy. The country’s powerful MITI ministry mandated a car for the masses, something that would drive Japan out of its postwar funk. By government edict, it was to be faster than 100 km/h, lighter than 400 kg, and good for 30 kilometer per liter gasoline.  It was the Japanese version of the German Beetle, or the French 2CV. They encouraged the air-cooled  boxer engine, and Volkswagen inspired the name Publica.

A year after the Publica went on sale in 1961, Toyota showed a riotous red sports car, the Sports 800. As if a demure office lady exchanged her black suit for thigh-highs, garters, and a whip for a Friday night party at Department H, the Sports 800 was a sexy body on the bones of the outwardly prude Publica. But if you thought you could get the lady drunk, tough noogies: It could nurse a 1 liter drink of gasoline for a full 31 kilometers. Yes, that comes out to 73 mpg, according to whatever standard they had back when, but nonetheless.

Both cars were engineered by Tatsuo Hasegawa. Like the 15 year-old Sugi, Hasegawa’s heart used to be in planes. An aeronautics engineer by trade, Hasegawa joined Tachikawa Aircraft Co. after graduating, where he soon was made chief designer of a badly-needed single-seat Tachikawa Ki-94 high-altitude fighter-interceptor. Wartime Japan wanted to pit them against the high-flying B29s that ravaged the country. When WWII was finished, the fighter wasn’t. Hasegawa followed the career path of many post-WWII aircraft engineers, and started to design cars. He put his mark on many successful postwar Toyota cars as Chief Engineer of the Corolla, the Celica, the Carina, and of course on the Publica, and its two-seater offspring, the Sports 800.

Like the office lady putting on lipstick and a tight dress, the Sports 800 signaled a Japan getting out of the long postwar misery, and ready for the party that culminated 20 years later. The Yotahachi also incited a 2-seater craze of Japanese proportions. No Japanese OEM could be without one.

When Toyota’s red number went on sale in 1965, Honda threw its anti-Yotahachi into the two-seater fray, the Honda S800. Spec-wise, and here comes the lesson in high-tech, the Honda was the clear winner. It had a modern twin-cammed water-cooled 4-cylinder engine that produced 70 horses, much more than the meager 40 horses of the Toyota 2-pot. The Honda had modern disk brakes, the Toyota made do with stone-age drums. However, all of that bought the Honda only 5 km/h more on the straightaway, and nothing in the twisty turns of the racetrack. In race after race, the Toyota devastated the heavyweight Honda. The Honda tipped the scales at 700 kilograms, the Toyota Sports on the other hand was a 580 kilogram featherweight, quick and ferocious like a weasel. To save weight, aircraft engineer Hasegawa used the thinnest steel possible, augmented with aluminum in strategic spots. The air-cooled engine played a big part in the lightweighting, and as we shall see, the powerplant literally could be carried around by one person. Even the price was put on a diet, the Yotahachi did cost a strategic 595,000 yen, whereas the Honda went for 658,000. (I spare you the currency conversions, by now they are meaningless.)

At the beginning of his career at Toyota, Sugiyama shared a dormitory with many other young Toyota inductees. On the way from work, he often came across a Yotohachi collecting dust in a corner. Sugi rounded up the owner, and learned that the engine had given up the ghost, and that the car was left to likewise die. The handicapped sports car quickly changed owners. The dead engine was removed and carried up four flights of stairs to Sugi’s small dormitory room, where it was fixed and brought back to life. “It lasted more than 40 years,” Sugiyama says with a grin, and as we round the corners in the vicinity of Toyota’s Tokyo HQ,  the little engine with the cubic inchage of a tallboy and two shots voices its concurrence with a little extra rmmmm-rmmmm.

The car could be easy on the pocketbook and light on the scales also because it has no air conditioning, as we become aware at high noon in a “feels like 120 F” sweltering Tokyo. And this is when another high tech aspect comes into play. The car doesn’t have a ragtop that gets musky after a few years,  it has a hard “targa-top” that can be removed by twisting a few levers, and it can be stored in the tiny trunk just big enough for a weekend-trip with your new girlfriend to the onsens of Hakone. The aluminum roof received its name from the Porsche Targa, but it shouldn’t. The Porsche was introduced a year after the Yotohachi, and that one was predated by a few other hardtops, like the Triumph TR4, or the Fiat 1200.

Marriage made Sugi divorce his beloved Yotohachi, “it simply isn’t meant for couples with kids.” However, 10 years later, he could buy back the same car from its intermediate owner, and worried that the Yotohachi could get lonely in the garage, a second one joined the family.

In the 90s, Sugiyama went stateside to become Senior Vice President of Toyota Motor Sales U.S.A. The Yotohachi, however, did not share his success in America. “42 were brought stateside for a marketing study,” he tells me, “but we quickly gave up. The engine was too small, and the highways too big.”  The 42 Yotohachi transplants became a sought-after treasure, and the object of an American Yotohachi club. Sugi figures half of the 42 American Yotohachi still are roadworthy.

The Sports 800 shares the fate of many high-profile, low-volume sports cars. A total of 3,057 units were built between 1965 and 1969 at the Toyota Group Company Kanto Auto Body in a factory at the feet of Mount Fuji. Most remained in Japan, 455 were exported, 290 of them as left hand drive versions. The favorite car color in Japan is white, but not when it comes to the Yotohachi. “40 percent of the cars were shipped in red, 30 percent in silver, and 20 percent in blue,” Sugiyama says. “White ones never were made. Some people repainted them in white, though.”  Some 30 Toyota Sports 800 were built in the Philippines, Sugiyama tells me.

Back from the States, Sugiyama became first Vice President, then President of Toyota’s Technical College in Tokyo, where future automotive technicians earn their degree, and learn how to make mind-blowingly over-the-top custom car jobs that get shown at each year’s Tokyo Auto Salon. Of course, people don’t go to the Auto Salon to ogle scantily-clad booth babes, they go to admire the latest crazy creations of the college.

Many of the students raced electric vehicles more than 20 years ago, mainly converted Kei-cars, “with way too heavy lead-acid batteries,” Sugi says. He suggested to convert a Yotohachi to battery-driven, and it was. Put on the road in 2002, the car sported a twin electric motor that fit perfectly into the flat two-cylinder packaging. The car was made street-legal, and it can legally be driven to this day.  Years before going electric, the Yotohachi was fitted with a gas turbine. Already at the 1977 Tokyo Motor Show, Toyota had a Sports 800 gas turbine hybrid on display. The car can be seen at the Toyota Auto Museum, but Toyota still seems to haven’t all given up on the idea of micro gas turbines.

Long retired from the office work at Toyota, Sugiyama dedicates his life to the two Yotohachi at home in Kanagawa south of Tokyo, and to the approximately 1,000 Yotohachi thought to be in various stages of roadworthiness around the world. As President of the Toyota Sports 800 Committee, he works on keeping the now more than 50 year old cars alive much longer. “The biggest headache is parts,” says Sugi, and old car fans around the world nod fiercely. Weather-stripping is at the top of his migraine list, the rubbery parts never age well. With an addressable market of just 1,000 cars, it is hard to impossible to entice manufacturers. “On top of it, Toyota protects drawings like crown jewels – if they can still find them.”

Government regulations can be hard on an aging Yotohachi. “If only one part is missing, the car won’t get its shaken,” Sugi says, referring to the dreaded Japanese inspection regimen that keeps much younger cars off the roads. Which leads to tragic cases of car-cannibalism. As much as the 1,000 surviving Yotohachi are babied by their owners, the death of a friend’s Sports 800 always means a new supply of lusted after parts.