It’s easy to assume that the economics of autonomous vehicles will make them clear winners, but new research shows self-driving cars will have to work hard to match car ownership. 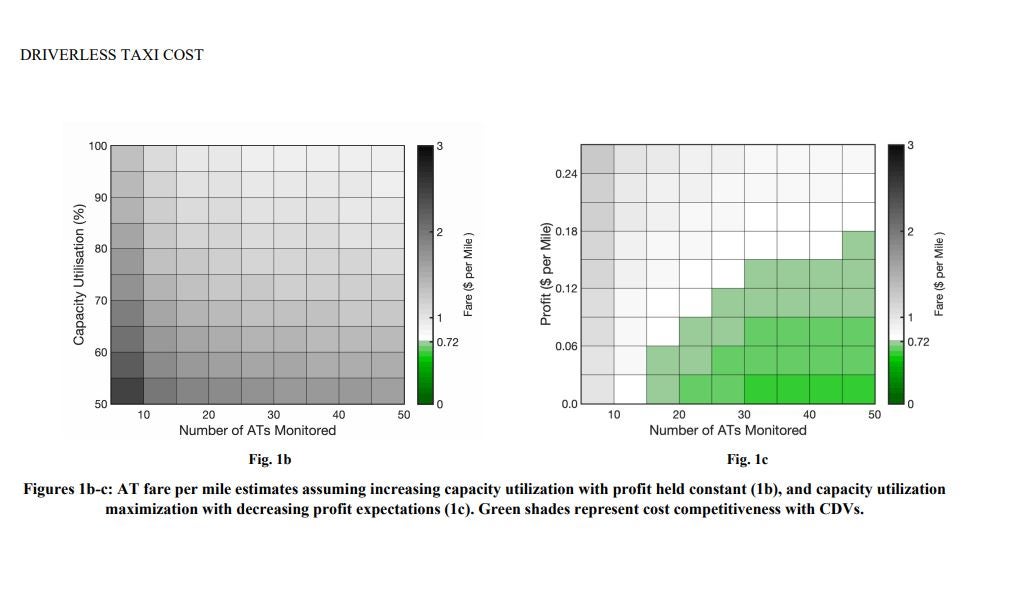 Several of the most high-profile mobility technology companies are increasingly betting their futures on the dream of autonomous robotaxis, which seems to have become an alluring story for investors. With Tesla's traditional auto manufacturing and sales model facing slackening demand and Uber's core ride-hailing business facing slowing growth and numerous headwinds, Silicon Valley's most prominent mobility disruptors seem to require self-driving technology to justify their heady valuations. But, technological challenges aside, are autonomous taxis actually the economic holy grail that they are made out to be by the companies and investors leading the assault on traditional automobility?

A new paper from Ashley Nunes and Kristen D. Hernandez of MIT's Center for Transportation and Logistics shows that the robotaxi faces a tough path to replacing the privately-owned, human-driven vehicle, suggesting the technology may not be the silver bullet that Uber, Tesla and others hope. Their research looks at San Francisco, one of the markets that's been targeted by several autonomous drive companies, and finds that "assuming current market conditions persist - HAV [Highly Automated Vehicle] technology struggles to achieve price parity with CDV [Conventional Driven Vehicle] ownership."

This finding flies in the face of years of assumptions that AVs would be significantly cheaper to operate than CDVs, largely derived from the early work on shared AV mobility pioneered by Lawrence Burns and others at Columbia University's Earth Institute [PDF here]. Those findings came from a more abstract approach to the problem, showing global mobility costs could be reduced by replacing private car ownership with a shared autonomous fleet made up of specialized vehicles leveraging electric drive and much-reduced vehicle mass (since AVs presumably won't crash or need to carry a whole family). Reduced fleet size, vehicle consumption and parking costs contributed to the eye-popping finding that AVs would cost just $2 per day in both ownership and operation costs.

The new MIT study takes the opposite approach: rather than imagining the global efficiencies of a radically reimagined mobility system, Nunes and Hernandez take real-world vehicle ownership and taxi company data and forecast the cost of introducing robotaxis into this status quo. What they found is that CDV total cost of ownership is a remarkably low 72 cents per mile, whereas the high licensing, insurance, cleaning and safety oversight costs associated with autonomous taxis combined with the low (52%) utilization rate of the current taxi fleet means robotaxis are likely to cost between $1.58 and $6.01 per mile.

Surprisingly, this economic challenge doesn't come from the high capital cost of an autonomous vehicle which the authors model at $15,000, which they admit is "unrealistically low." Instead, costs associated with taxi medallions ($250,000), insurance ($9.600 per year), and safety oversight by remote teleoperation employees ($211,662 per year) add the most significant costs. Due to this cost structure, economies of scale top out at around 10 autonomous taxis at a cost per mile that is still well above that of a CDV, leaving only two strategies open to robotaxi operators: shared ridership sufficient to boost utilization by some 30% over current taxi levels (a challenge, the authors note, given that "consumers show a strong aversion towards for-hire high occupancy travel") or a 37% reduction in profits.

Lest this come across as some AV-bashing exercise, the authors are quick to note that this state of affairs is far from ideal given the potential public benefits of self-driving taxis, both from the potential to reduce pollution and a reduction in crashes. There are, however, opportunities to improve these tough economics that don't rely on a transformation of cars themselves into ultra-light-weight electric commuter pods (which could easily take decades to realize, given the regulatory and technological challenges).

First, AVs could open other revenue streams whether through monetization of rider behavior (think paid in-vehicle content or ads and incentives to get you to make a detour to certain businesses) or through ancillary business models like delivery. Though the authors state that capacity utilization rates have "received no attention in HAV-related discourse," Ford executives have specifically highlighted utilization as the key to their experiments to understand the economics of early autonomous fleets (see this discussion I had last year with Jim Farley and Sherif Marakby on The Autonocast) and they have said that tasks like delivery during off-peak travel hours will be critical to achieving profitability. The authors also acknowledge that government policy that raises the cost of CDV ownership could also make AVs more cost-competitive.

As with most AV-related studies, this one is likely to prompt contentious responses with skeptics insisting this research proves that AVs are a fool's errand and boosters claiming that it saddles AVs with irrelevant costs related to current taxi fleets (like the much-derided taxi medallion). Of course, the reality is far more complex: a mix of technological and policy changes could make robotaxis economically viable, but the short-term challenges are very real. Certainly any hope that Tesla will be able to launch a robotaxi business that throws off $30,000 per vehicle per year seems unrealistic in light of these numbers (not to mention the challenges facing human-driven Tesla fleet operators), as does any hope that Uber can simply flip the switch and become profitable on the strength of an all-autonomous fleet.

Much debate about the economics of robotaxis still lies ahead of us, but this work shows that the conversation is getting more specific and grounded in reality. The AV space has matured past the point where we can continue to rely on early, abstract and highly optimistic AV fleet operation cost estimates like those forwarded by the Earth Institute and with this paper we can start to look at the potential of AV fleets using real-world data. Since the Nunes and Hernandez included links to all of their publicly-available data sources, we can look forward to more researchers building off their work and reinterpreting their data into ever-more sophisticated models, as we start to understand how the robotaxi future will pay for itself.