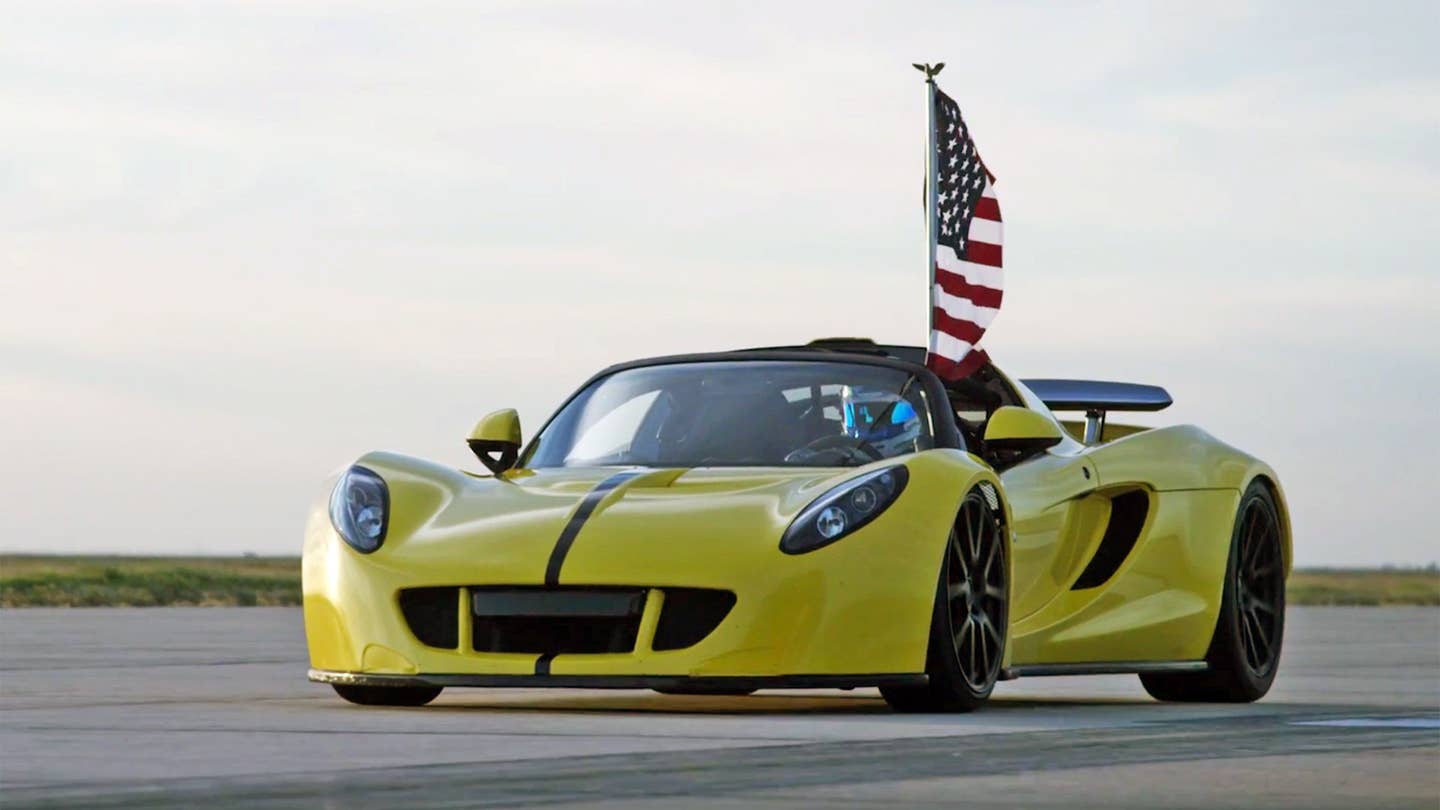 Hennessey Performance's Venom GT Spyder got inked into the record books again late last month by blitzing its way to a new top speed record. On March 25, the Venom GT rocketed to a top speed of 265.5 mph on Naval Air Station Lemoore's 2.9-mile runway, spewing a dark contrail of exhaust all the way—and with its roof hanging out back by the starting line.

This isn't the Lotus-based-but-massively-modified supercar's first dance with fame. The car grabbed the production car top speed record back in 2014, when it topped out at 270.4 mph during a blast down the runway at NASA's Kennedy Space Center. (That works out to Mach 0.36, for you aviation buffs.) That was only 2 mph faster than the Bugatti Veyron Super Sport, but the difference was more than enough to kick the badass Bug off the top spot on the list of fastest cars. This latest record, in turn, also knocks a Bugatti out of the record books—in this case, the open-top Veyron Super Sport Vitesse, which hit a topless 254 mph back in 2013.

Hennessey's gallop down the Lemoore straight wasn't just another excuse to kick Ettore Bugatti's ghost in the nads, however. The company went for the record to celebrate its 25th anniversary.

"We are grateful to have the help of so many friends, family, employees, customers and partners over the past 25 years," founder John Hennessey said in a statement. He also took the opportunity to tease the next generation of his record-breaking supercar, which he claims may hit 290 mph: "We look forward to the next chapter of the Venom with the F5."

The Venom GT and Venom GT Spyder, in case you've forgotten, are both powered by a twin-turbo, 7.0-liter V8 that whips up a furious 1,451 horsepower and 1,287 lb.–ft. of torque. All that power heads solely to the rear rubber, and is directed through a good ol' fashioned six-speed manual gearbox—just as God and Carroll Shelby intended. The Spyder version, interestingly enough, was only created after Aerosmith's Steven Tyler asked the company if it could build him an open-top version, presumably because the hardtop version wasn't roomy enough for both him and his lips.

If you'd like to relive the memory of Hennessey's latest record run at your leisure, the company will be offering three special edition Venom GT Spyders. Each of those supercars will cost $1.3 million before the taxman has his say. Or you could just re-watch the video below. Far be it for us to tell you how to spend your money.