Best Battery Terminals: Meet The High-Current Demands of Your Battery

The best battery terminals can improve the performance of your vehicle’s convertor and help you achieve higher speeds. If you notice that your vehicle isn’t accelerating, take a look under the hood and you may find the culprit: the battery terminals may be corroded, and that could be the reason behind your car or truck's insufficient horsepower. Consider some of the aftermarket battery terminal replacements in our buying guide below.

An affordable Schumacher BAF battery terminal kit that offers an easy replacement for a damaged primary battery cable on your car battery.

A military-spec battery terminal kit from Cllena that can be used for ground connection, parallel connection, and battery extension.

All of our reviews are based on market research, expert input, or practical experience with most products we include. This way, we offer genuine, accurate guides to help you find the best picks.

You will find these stainless steel 3/8th-inch threaded battery terminals on the batteries of most heavy- and medium-duty Class-8 trucks on the road. This design securely fastens and holds the connection to the lug onto the battery terminal’s lead base. It looks like an upright stud or bolt.

Also called insert battery terminals, these are used on absorbed glass mat batteries on uninterruptible power systems and emergency backup applications. They come in M5 to M8 sizes (metric measurements). This means that if your battery has an 8mm terminal, you need a bolt that has an 8mm-diameter thread.

ACDelco began business operations in 1908. The company supplied parts to airplanes that Charles Lindburgh and Amella Earhart flew. ACDelco helped build equipment for use in World War II and for the Apollo space program. Although it is a global company with distribution centers in North America, India, and Japan, among others, its home office remains in Detroit, MI. Top battery terminals include the GM Original Equipment Battery Terminal and the Professional Battery Cable Terminal.

H.R. Schumacher founded the company in 1941 because he saw a need for processes that could provide corrosion and abrasion protection for metals. The company subsequently bought several other enterprises that have helped them expand their capabilities and their customer base. Now in its third generation of family ownership, one of Schumacher’s best offerings for battery terminals is the Coated Top Terminal/Post Washer set. The company’s main offices are in Houston, TX.

Battery terminals connect to the battery and battery cables with a number of devices: bolts, screws, or wing nuts. The fasteners should work well, but where and how they are located on the terminals are also considerations. Placement should make it relatively easy to work with the battery terminals, i.e., there should be room to work when you remove, clean, or install them. 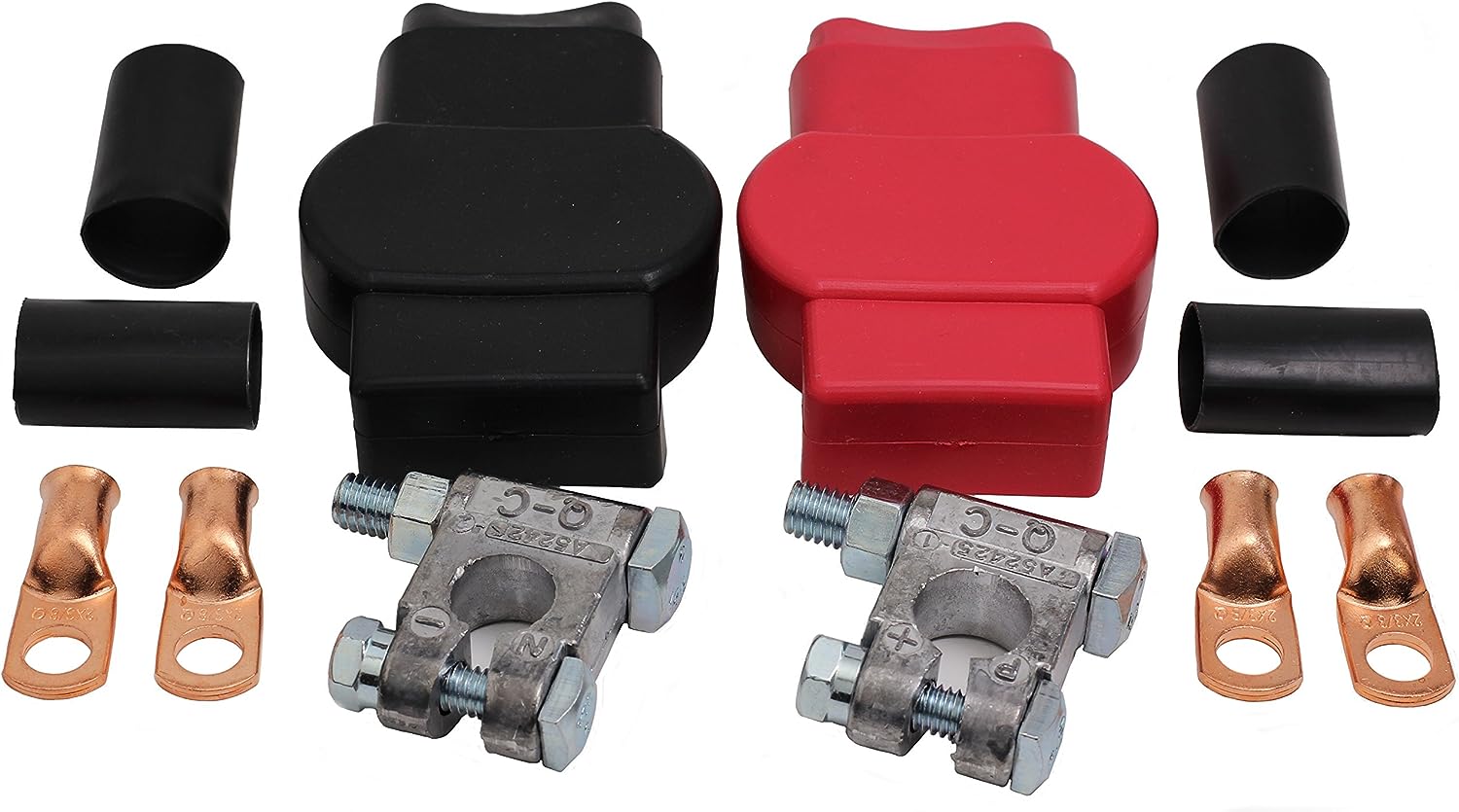 Our top pick makes a tight connection to battery terminal posts to help maintain power, so you get strong, stable performance. These battery terminals are great for multi-battery setups (such as marine batteries), off-road equipment, and race cars.

The clamps on these battery terminals may not fit all automotive batteries, and the design features a large screw and bolt that may be problematic on some vehicles, but we still recommend these battery terminals. They work great on multiple battery installations like marine batteries and are made in America. Note: you will need a tool to attach the copper lugs to the power wires or weld them on. 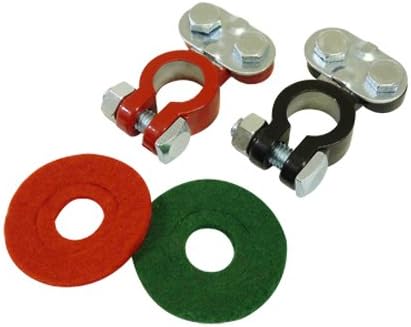 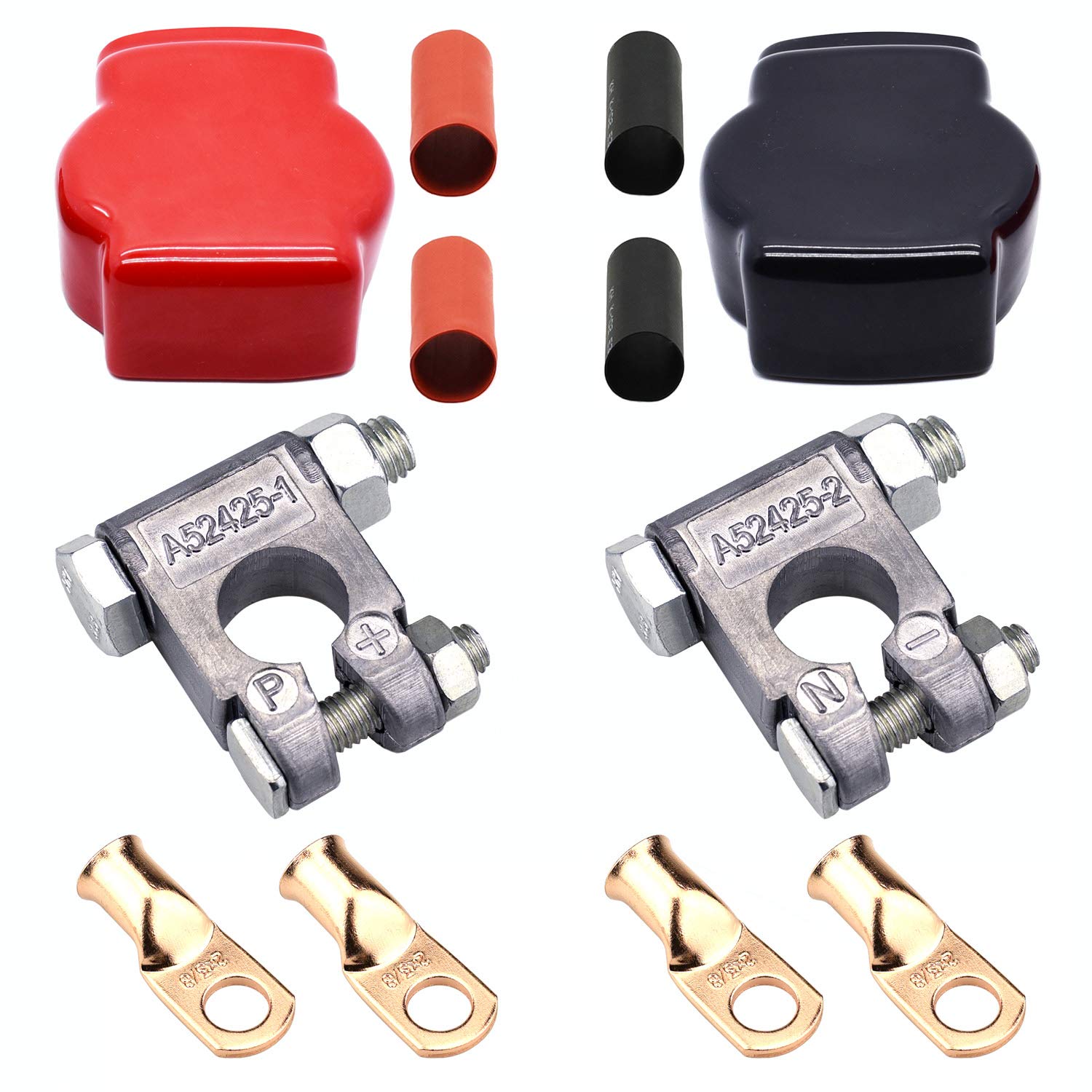 This battery terminal kit can be used in a ground or parallel connection configuration or as a battery extension. In addition to the positive and negative battery terminals, the kit includes four two-gauge copper lugs, lug covers, and red and black military-spec battery terminal covers. Use them on trucks, cars, RVs, SUVs, and boats.

While the quality of the plastic battery terminal covers could be better and the product may ship without installation instructions, they are an economical buy. Note: be sure to install correctly to avoid burning the battery cables. 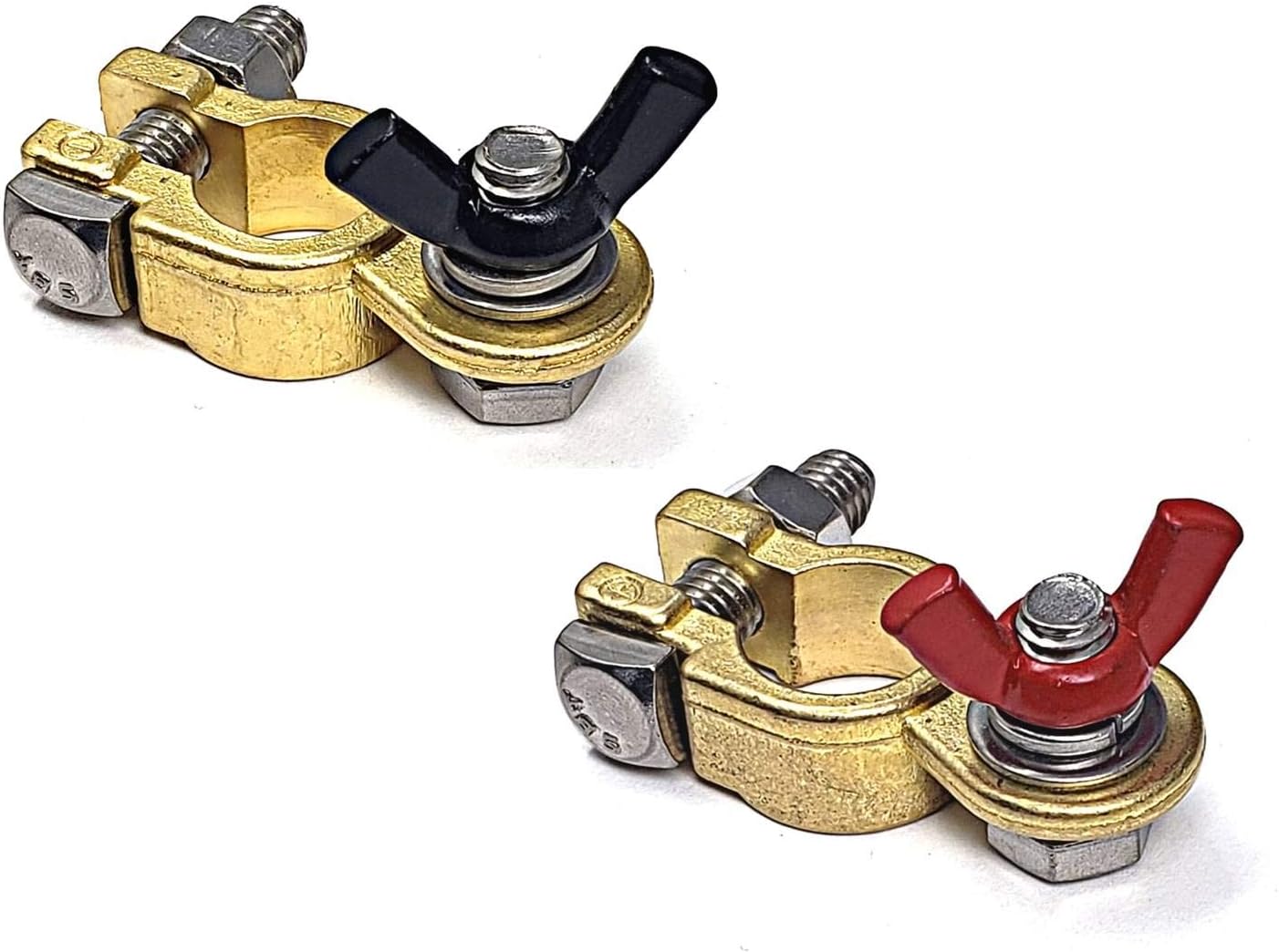 Able to withstand even the most demanding conditions, the WindyNation Brass Marine Grade Battery Terminal is a great pick for those working with heavy-duty machinery. It is equipped to work with marine equipment and meets military specifications when it comes to durability. It comes with both positive and negative terminals. Made out of brass, the stainless steel fastening tech prevents issues with corrosion.

The device connects to most standard post batteries. This product stands out for its impressive ability to balance structural integrity without compromising electrical flow. Compared to lead or zinc plating on battery terminals (materials that can act as resistors), the brass lets your batteries work as efficiently as possible.

However, there are downsides to the increased electrical efficiency: since it flows faster, it also heats more. Though it is structured so this won’t impact the function, it does result in extra thermal energy. It is a nominal amount of heat that shouldn't cause issues in a marine setting.

The Guteato Store Battery Terminal Set is compatible with 6- and 12-volt plates. The terminal connectors are compatible with all types of vehicles, ranging from trucks to RVs. Working with three-way terminals, the pure copper plate helps things flow efficiently. Each set comes with a thick polymer that's color coded to indicate whether it’s positive or negative.

The clear-cut mode of installation makes the setup much more intuitive. With a cathode ringing in at 0.71 inches and the anode at 0.67 inches, it fits most common batteries. Versatile enough to work almost anywhere, this set of steel terminals is durable.

While these terminals perform well, the design lends itself to a shorter shelf life. Some users have also complained that they had to install them upside down. In addition, they're steel and vulnerable to corrosion. Still, this is an affordable, short-term solution.

Q: How do improve the connection of the battery terminals?

A: If you notice that you are not getting the best out of the connection of your battery terminals, it may be due to a dirt layer or a metal oxide coating. The latter forms when the terminals are exposed to heat and humidity and result in an extra dull layer on the metal. To get a better connection, use a wire brush to scratch off the terminals until they are shiny.

Q: How do you prevent battery terminal corrosion?

A: When a vehicle’s battery is damaged, there is usually a build-up of corrosive acid powder. The acid powder, which is either white, yellow, or green, leaks onto the terminals and corrodes the material. In the end, the terminals will not be able to maintain an electrical connection. The battery won’t be able to complete a discharge when required and may eventually die.

Our top pick is the Fastronix Military Spec Battery Terminal. They allow for superior signal transfer from your vehicle’s battery to the electrical system, and the terminals are designed for durability.

The Schumacher BAF-TTC Terminal are affordable replacements for corroded stock battery terminals, and they are easy to install.