Porsche Has Stacked The Nurburgring 24 Hour Deck In Their Favor 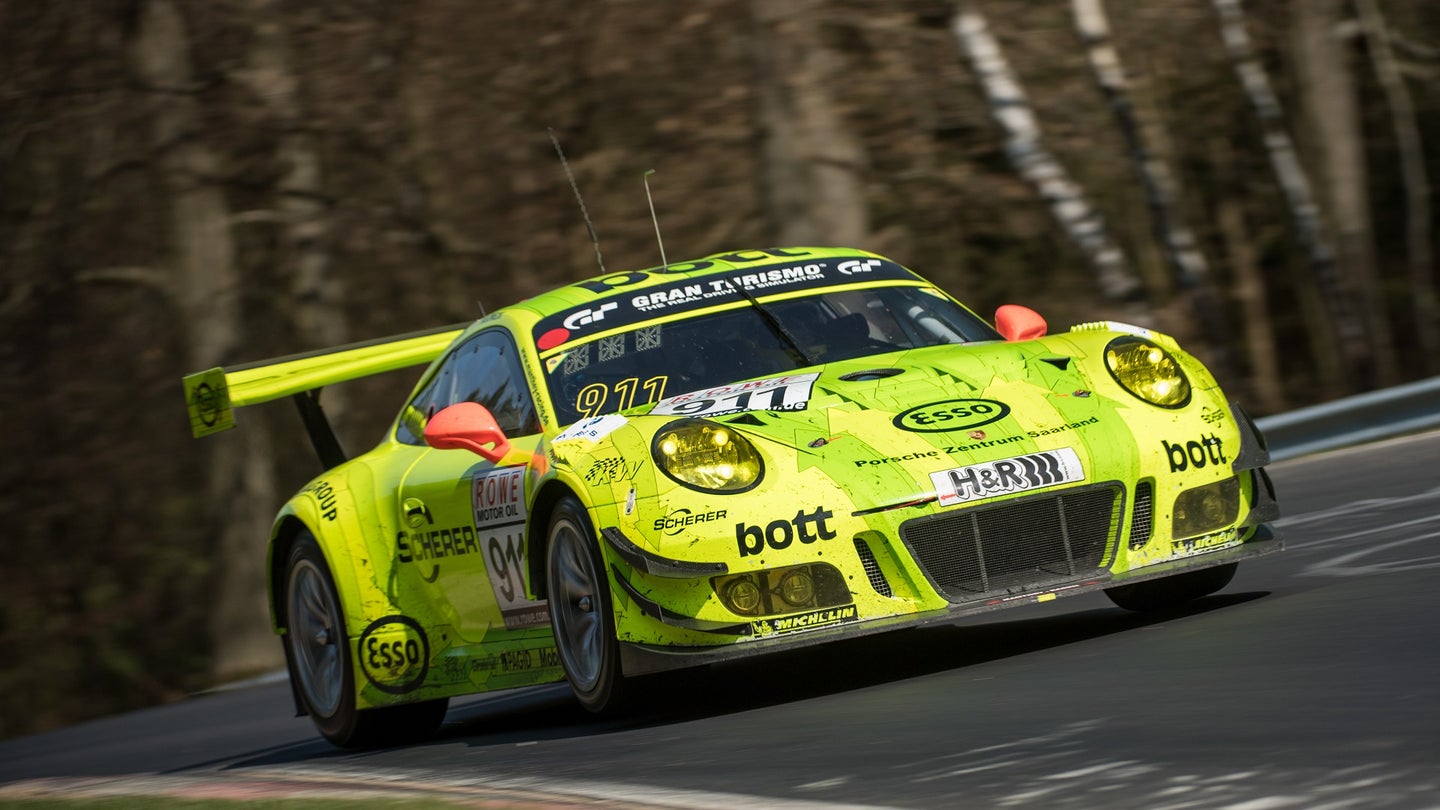 Porsche has been preparing for the Nurburgring 24 hour race all season, and they've been doing a damn good job of it, too. Porsche-owned Manthey Racing has come home victorious twice already in the first two four-hour VLN series races of the season, both times with Porsche factory drivers sharing driving duties. It makes sense that they care so much about this race, being that they've won the race eleven times (most recently in 2011), and they're looking to make it an even dozen. The race is also a point of pride among Germany's manufacturers, having been won by a BMW, Mercedes, Audi, Porsche, or Opel every year since 2002 (curse those Vipers!). While the race is still a long and grueling 24 hours, basically anything can (and often will) happen, Porsche is giving themselves a few advantages this year that might tip things in their favor.

First and foremost, there will be a full set of six brand new 911 GT3Rs entered in the race. There will be three cars entered in the race for Manthey, two for Frikadelli Racing, and one final entry resplendent in the traditional blue and green of Falken Motorsports. While Porsche's newest GT3-classed racer is already proven successful at the Nurburgring, it's the driver lineups that seem absolutely stunning to us. In the Manthey #911 car, a killer quartet of Romain Dumas, Richard Lietz, Fred Makowiecki, and Patrick Pilet will share driving duties for the factory's best bet on outright victory. In the Falken Motorsports car, another easy contender, Joerg Bergmeister, Martin Ragginger, Laurens Vanthoor, and Dirk Werner will split the 24-hour race into more manageable chunks. The third Porsche in the "Pro" category is the Frikadelli Racing #31 with Klaus Bachler, Michael Christensen, Lucas Luhr, and Norbert Siedler aboard.

The "Amateur" category entrants, which also make use of Porsche 911 GT3R racing cars, are allowed to run a combination of professional drivers and so-called "gentleman drivers" or people who don't race for a living, suppose. In this category, Manthey has the #12 and the #59 in their corner. The #12 will feature two Porsche junior professionals, Matteo Cairoli and Otto Klohs teamed with Mathieu Jaminet and Robert Renauer, while the #59 car will feature Porsche pro Sven Muller teaming Hari Proczyk, Reinhold Renger, and S Smith.

“We’ve made the conscious decision to back our customer teams rather than compete against them in the VLN races and at the Nürburgring 24-hour race. We’re supporting them by supplying works drivers as well as technical assistance,” says Sebastian Golz, Project Manager GT Customer Motorsport. “The expertise of our teams Falken Motorsports, Frikadelli Racing and Manthey Racing combined with our support and the concept of the 911 GT3 R have underlined in the VLN1 and VLN2 preparation races that we’re currently on the right path. We claimed pole position and overall victory at both of these events and also won the amateur classification. With our customer squads, we’ll now take on the challenge of the Nürburgring 24-hour race and the strong opposition from other manufacturers’ works teams.”

The race is on in just over one month from today, running a full 24-hour span from May 27th through May 28th. It's sure to be a stunning event, and it is usually live-streamed over the internet with English commentary, so be sure to check it out if you have the time. We'll post more in the lead up to the race with links and more information on the race itself.